The board acted at its formal monthly meeting Thursday night, when it also voted to place a medication take-back box at Town Hall and adopted a Comprehensive Environmental Policy regarding everything from eco-friendly cleaning supplies to rehabilitation of old buildings and conservation of open space.

In unanimously approving a resolution creating the new fire district, the board officially appointed the five fire commissioners, whose names were released last month, and tapped local financial planner John Greener as the district’s treasurer. Greener and the commission will serve for about year on an interim basis before Garrison voters choose a treasurer and commissioners for regular, elective terms of office. 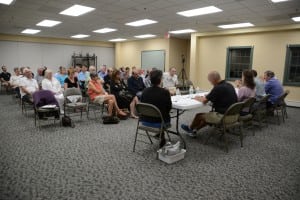 The Town Board held a public hearing session at the Garrison firehouse in September to get citizen input on creation of the Garrison Fire District. Photo by L.S. Armstrong

After two public hearing sessions and discussions during Town Board workshops for four months, the Town Board action came with little comment. As the board had weighed its options, and postponed the fire district launch from this fall to January, residents had increasingly voiced support for the concept and even critics came to back it. The new arrangement leaves the Garrison Volunteer Fire Company intact but makes its overseers the new commissioners, not the Town Board. Under state law, a fire district is a local political jurisdiction, the same as a town or village.

Having dispatched with one previously contentious question, the Town Board resolved another, voting 5-0 to spend $1,000 to install the take-back box in Town Hall, available whenever Town Hall is open, to collect unused medications, seen as a temptation lurking in family medicine cabinets and leading to drug abuse. In opting to host the drug drop-box, Town Board members debunked misconceptions – which they too had unwittingly helped spread – about needing an on-site police presence.

“We can have the medication drop-box right here in Town Hall,” Councilor Nancy Montgomery explained. “I apologize for the wrong information” disseminated earlier. “We thought we needed manpower to supervise it. It turns out we don’t.”

She said that the only necessary surveillance mechanism is a camera to monitor the box, which periodically would be emptied of drugs by sheriff’s deputies or federal Drug Enforcement Administration (DEA) personnel. She also said the box, obtained through the Philipstown Communities That Care Coalition, could ready before the end of November. 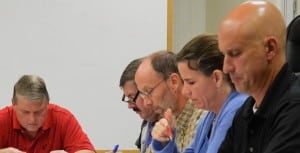 Where to place a drop-box in Philipstown vexed the community for weeks. To pay for policing incorrectly deemed crucial, the Town Board had voted in October to provide $64 a month – now no longer needed. The Cold Spring Village Board declined on Oct. 27 to provide the box once a month at the Cold Spring Police Department, located on the second floor of Village Hall, given concerns about accessibility. Thursday night, Montgomery lauded Cold Spring Village Trustee Marie Early for researching various drop-box questions and providing information that cut through the myths and got the project on track.

On another unanimous vote, the board adopted a Comprehensive Environmental Policy, the first town in Putnam County to do so, following up on a recommendation made last summer by the Philipstown Garden Club and joining jurisdictions nationwide.

In a resolution, the board pledged the town government would strive to reduce its use of non-renewable energy, buy goods whose manufacturing requires minimal energy, use cleaning supplies free of suspected or known toxins, save open space, favor renovation of existing facilities over construction of new buildings, employ land management techniques that minimize environmental threats, encourage water conservation, encourage alternative transportation and reduce emissions from town-owned vehicles, promote recycling, assist with disposal of hazardous materials, and communicate its policies to the public.

“There are a lot of things that could be done,” said Councilor Mike Leonard, who led the board’s consideration of the policy. However, he cautioned, “if you’re going to do it, you’re going to have to put some effort into it.” Sample steps board members suggested included installation of water-saving plumbing; continued stormwater management, encouragement of “walkability” and inter-municipal cooperation through such ventures as the planned Hudson River Fjord Trail, making infrastructure upgrades, and similar initiatives.

Last summer, the board heard from angry residents opposed to town methods for maintaining public dirt roads. Thursday night, it got more input, not from critics who want the town to cease its dirt-road practices but from residents who want the town apply them — by converting a private lane into a public road and caring for it.

While sympathetic, the Town Board offered little hope to the residents, from Eagles Nest Road.

“I don’t see that happening. It’s a one-way road; it doesn’t connect” with other roads, Supervisor Richard Shea told Ilka Marquardt, who presented the request. He and other board members observed that Eagles Nest only serves about three homes and is narrow, steep, and twisting. “It would be a stretch for the town to adopt it,” Shea added. “I can empathize but I just don’t see it happening.”

The rest of the board concurred.