The idea of getting a tattoo is anything but new. The tattooed “iceman” discovered in the Alps in 1991 dates back some 5,200 years. In recent years, tattoos have become much more accepted as a legitimate part of pop culture as the stigma once associated with them rapidly disappears.

Matt Montleon has seen that shift as owner and one of four tattoo artists at Beacon’s Honorable Ink. “The attitude towards tattoos started to change to the positive about 10 years ago when it hit mainstream television,” he told The Paper. “There are more and more people who want tattoos now.” 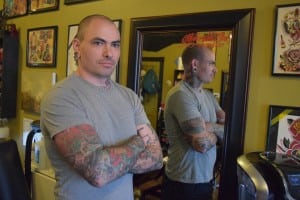 Montleon, who has been creating tattoos since 2004, said that commemorating a family member or other loved one is the most common reason why clients walk into his shop. It can also be about artistic expression. “Some people collect paintings — others collect tattoos,” he said.

In assessing who is drawn to tattooing, Montleon estimates, “It’s about 50-50 men and women,” adding that age is a factor at opposite ends of the spectrum. He has tattooed a small angel on the shoulder of an 83-year-old woman and once watched a fellow artist give a 95-year-old man three tattoos. Tattooing young people is regulated, however. “It’s against the law in New York State to tattoo anyone under the age of 18, even with parental consent,” he said. And of those who get that first tattoo, Montleon has observed that very few end up with just one.

Not all tattoos are about loved ones or art. When a woman asked Montleon for a Waffle House tattoo, he assumed there had to be an interesting story involved. “No,” she said. “I just really like Waffle House.”

Limits — and no boundaries

There are limits to what Montleon will depict on a person’s skin. “I won’t do racist or gang tattoos, or anything hateful,” he said.

To many, tattooing the face may seem extreme. “I’ll do facial tattoos depending on the circumstance, usually a very avid client with many tattoos,” he said. “But never someone getting their first tattoo.” He also discourages first-time clients from tattooing their neck or hands.

Montleon, who also paints, said he considers himself an artist, but views his job as a trade. “I love doing flowers and custom lettering,” he said. “But you’re really kind of a slave,” doing what others ask you to do. “When someone trusts you as an artist and says they have an idea but no boundaries, telling me to do it as I please, that’s as close to a favorite job as I get.”

The good and bad side of life

Christine Nauman has taken tattooing to a high level. The 51-year-old Beacon resident got her first small tattoo when she was 18. Why? “Because I was 18! … and wanted to be a rebel,” she said. About 10 years ago, her interest intensified. “About 60 percent of my body is covered now, including my back, both arms, my ribs, hips and thighs, my ankles and my feet.” Nauman works in banking — an industry that frowns upon employees having visible tattoos. Her calves are not tattooed, which allows her to wear a skirt.

Nauman said that her tattoos “tell my story, including both the good and bad side of life.” Some, such as a Phoenix rising, lotus flowers and koi fish are about overcoming adversity and are uplifting. Others symbolize the darker side of life and include skulls and dying flowers.

The meaning behind the tattoo that occupies her entire back is very personal. “It depicts the quiet beauty of the water and lotus flowers versus the Phoenix rising from the flames,” she said. “It explains my struggle with my health … the calm exterior and the internal fight.” She has appeared twice on Spike TV’s Ink Masters and has no regrets about the extent of her tattooing. “Any tattoo you get reminds you of where you were at that point in your life.”

Montleon’s own tattoos rival Nauman’s. “I’m about 50 percent covered,” he said. Some relate to his wife and children while some are “art for art’s sake.” He also has a portrait of Albert Einstein tattooed on one thigh and Nikola Tesla on the other.

Waiting for something special

As a young woman, Cold Spring’s Eileen Lahey always wanted a tattoo. “In my 20s I’d get temporary tattoos,” she told The Paper. “But I wanted my first real one to be something special.” She waited, and years later had the initials “R” and “C,” in honor of her son Ryan and daughter Claire, tattooed around her right ankle, connected by a series of flowers. “I want to get a second one on the back of my neck, an Irish Claddagh, the symbol that’s on my mother’s tombstone,” Lahey said. “The only thing stopping me is how much it hurts. If someone tells you it doesn’t hurt, they’re lying.”

Montleon agrees, to a point. “Pain varies with the location of the tattoo,” he said. The palm of the hand and the bottoms of feet are two of the more painful spots. Neither is requested very often.

Tahitia France, 45, of Beacon got her only tattoo 15 years ago. What seemed like a good idea at the time turned out otherwise. “I wanted to prove my love for a man,” she said. France had his name, “Conrad,” tattooed on her chest just above her right breast. Unfortunately the relationship didn’t last. “Of course I regret it now,” she said. “I’d be more than happy to remove it. I just haven’t invested the time to get it done.”

Montleon urges caution when it comes to boyfriend-girlfriend tattoos. “I constantly tell people that they have to remember that this is permanent.” Laser treatment, usually administered by a doctor, can remove a tattoo, but he warns that the process is lengthy, expensive and extremely painful. He describes it as a controlled burn. “It hurts way more than getting a tattoo.” In indications of situations less drastic, but also indicative of unwise decisions made in the past, Montleon also gets numerous requests to cover over old tattoos.

One of a kind

Justin Fowler is a familiar face behind the counter at the Tito Santana Taqueria on Beacon’s Main Street. A koi fish, a symbol of good luck, dominates his arm’s-length tattoo. “To me, it’s about self-improvement. It’s a reminder to always be improving myself — to do a little better,” he said. Fowler’s tattoo took three sittings to complete and was based on a custom-made drawing that the artist worked from. “This design, my tattoo, is something that only I will ever have,” he said.

The main concern – and costs

Montleon advises people to be aware of health factors when choosing a tattoo artist. “The main concern is cross contamination from one client to another,” he explained, adding that most materials are disposable and used only once. “Here, everything that isn’t disposable undergoes hospital-grade sterilization” after every use. “And we test [the sterilization equipment] once a month. Most places test once a year.”

Simple, small tattoos can take as little as five minutes and cost an average of $150 to $200. At Honorable Ink, a large, complex design can require 50 hours of work spread over a number of sessions. A five-hour session costs about $600.