Sculptures capture the light, the imagination, and the eye

With contributions from 57 local and international artists, Peekskill Project 6 has filled the city’s waterfront with public art. Organized by the Hudson Valley Center for Contemporary Art with its works selected by a committee of nine artists and curators, the exhibit continues through Dec. 31.

Launched in 2004, the exhibit is designed to bring contemporary art out of the museum and into the community, specifically into spaces not normally used to present art, using the city as a stage. The works include site-specific exhibitions, sculpture, photography, video, performances and workshops presented in locations that include empty industrial buildings, storefronts, parks and private homes, as well as the HVCCA. Each artist spent a week in Peekskill to explore and learn about its social, geographic and cultural history as inspiration.

A recent addition to the project is by the Dutch-Icelandic artist Olafur Eliasson, who lives in Berlin. His mesmerizing piece, Your Repetitive View, plays with landscape, light and perception. Inside a shipping container lined with mirrors one sees a kaleidoscopic expanse of illusion. Looking in one window and out through another, viewers see the surrounding expanse of sky and river, tree and human, framed and repeated many times over. This piece sits at the waterfront park near the Peekskill train station. 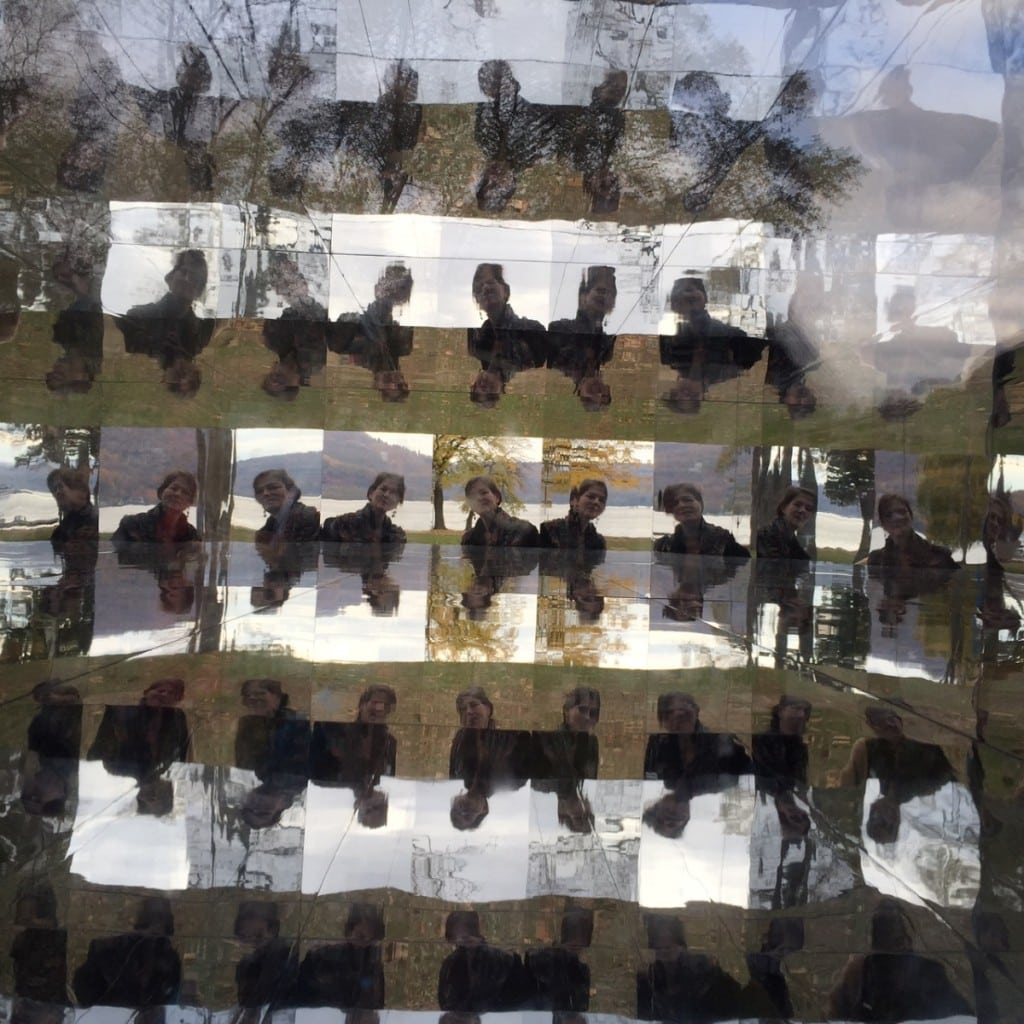 Nearby in the same park is Solar Finn (2015), by Mark Andreas, a large kinetic sculpture made of cedar, ash, steel and solar panels. This elegant but confounding work moves in a continuum of different states. It works in a reactive relationship with weather and natural forces. Solar Finn uses solar panels to collect energy used to power a pump, which cycles water between an inner and outer reservoir to be distributed throughout the sculpture. Whether the cycled water has some environmental benefit to the surrounding earth and landscape is unanswered but the work provocatively raises the question.

Molly Haslund, from Denmark, has placed 1000 Wooden Balls in different formations outdoors of a temporary factory site at 150 N. Water St. She continues to move the balls throughout the duration of the project. Haslund has also created a large-scale wooden compass for another ongoing performance work in which she carries the compass around Peekskill and uses it to make chalk marks on the streets – a choreography project in public space.

Peekskill artist Peter Bynum has filled 10 inset stone archway spaces under Route 9 with vinyl canvases that reference natural biomorphic forms. Titled Life, these images have been reproduced from Bynum’s studio paintings where he uses the medium to create patterns of branching architecture, letting the paint itself become nature. It’s a great use of space and highlights a piece of infrastructure that might be otherwise overlooked.

Dustina Sherbine’s The Red Record is a multi-site installation made of piles of oyster shells scattered along the waterfront, under a stairwell at 190 N. Water St., at the Bruised Apple Bookstore, and on the streets of Peekskill. The oysters, a once native river species, infiltrate the city landscape. The piles reference oyster middens, the ancient shell discards of the Lenni Lenape, native people of the Hudson River Valley. The work takes its name from the Walam Olum, or The Red Record, a historical narrative of the Lenape translated in the 1830s by antiquarian Constantine Rafinesque.

Artist Megan Snowe, who lives in Philadelphia, spent time collecting stories and objects from Peekskill residents about their “endings” to make her installation piece titled The End (2015). The piece has a ghostlike, dreamy quality conjuring the past but reflecting possibilities for the future. 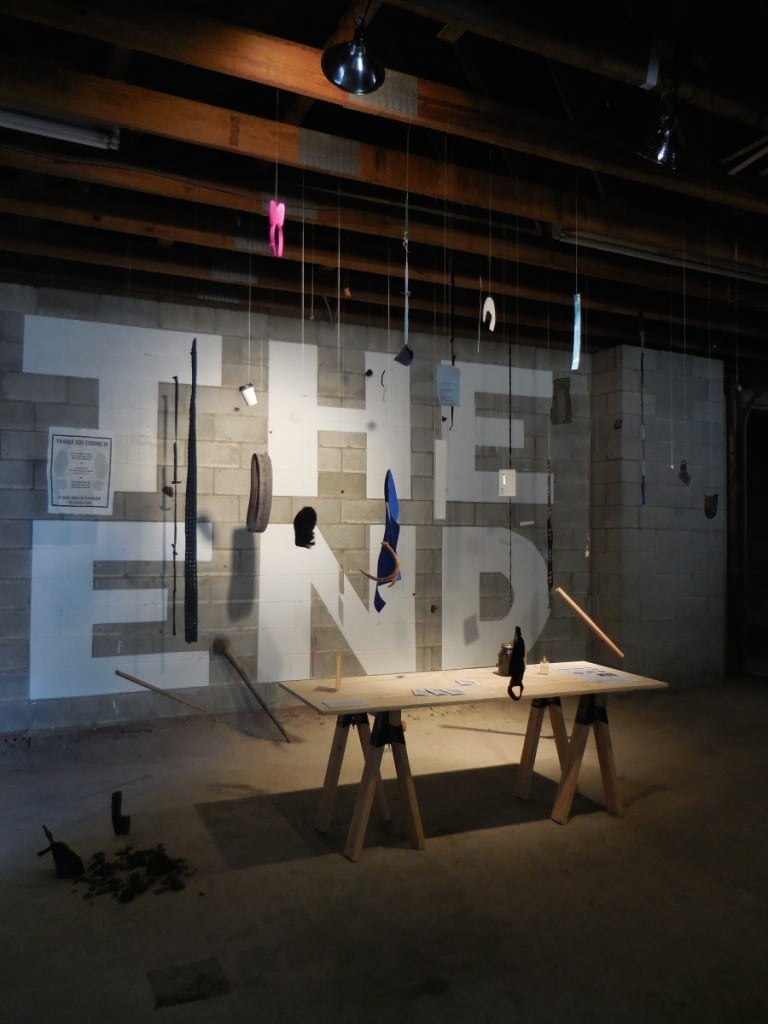 Anomaly no. 2 (meteorite) by collaborative team Really Large Numbers (Julia Oldham and Chad Stayrook) is a mixed-media sculpture in which the artists examine the events of “the Peekskill meteorite,” which fell onto a parked car in October 1992. Using scientific and mystical methods as well as humor, Really Large Numbers recreates the calamity.

Italian artist Andrea Mastrovito also created a compelling installation that references a local historic event. The Peekskill Evening Stars is a haunting projected animation inside a dark abandoned building. It was inspired by The Peekskill Evening Star, which ran inflammatory editorials that fueled the Peekskill riots in 1949. The graphic video shows four men shooting toward each other from four walls of the room and then at the ceiling. The shooting stops and the ceiling silently depicts the disposition of constellations that could be seen from Peekskill on Aug. 27, 1949, the day the riots began.

Smoke Gets in Your Eyes by New York City artist Elana Herzog was inspired by a white domestic wood stove she found abandoned in an empty factory. Herzog’s installation around the stove is comprised of patterns created with carpet remnants, pieces of old wooden flooring and printed textiles. This labor intensive yet playful installation is about “domesticity and work” but is at the same time a meditation on the past, time, change and things left behind.

James Mulvaney, a Peekskill artist and one of the curators of the project, created a piece with painted lumber titled Stack. It juxtaposes the image of the standard wooden pallet with the lumber used in framing a building, in which he designed a series of wooden parts that mimic the function and feel of both a pallet segment and a building modular. Stack is intended to be a monument as well as an anti-monument to Peekskill’s present development and history as a transit hub. 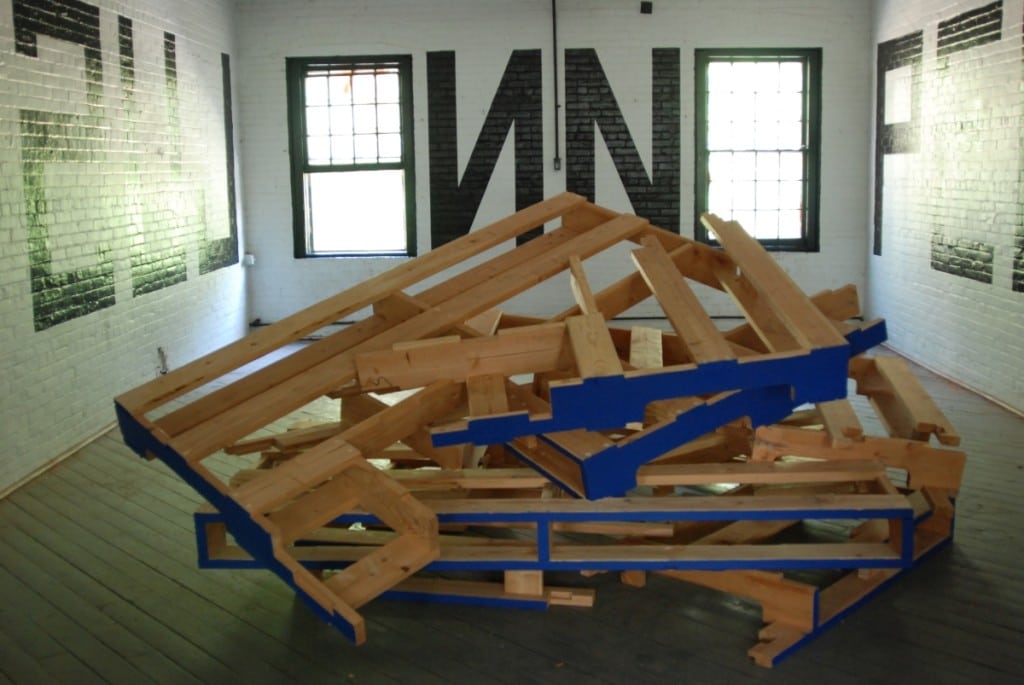 Robert Brush, of Beacon, suspended a stark white neon sign that glows with the words En Plein Air. Brush’s language speaks to the original Hudson River School painters and their mystical inspiration by the air, light and landscape. In much of the artwork in Peekskill Project 6 one can feel vestiges of this enduring inspiration.

For more information, including a map, visit peekskillproject6.org. HVCCA, at 1701 Main St., is open 11 a.m. to 5 p.m. on Friday and noon to 6 p.m. on Saturday and Sunday. The North Water Street industrial sites are open from noon to 4 p.m. on Saturdays and Sundays (phone 914-788-0100 for information). The last of a series of discussions on public art, “Taking Up Space: The Archive, the Aftermath and the Curator as Storyteller,” will take place at HVCCA on Saturday, Dec. 5.