Although there are signs that the Hudson Valley housing market has begun recovering from the recession, a new study suggests more residents are renting instead of buying. In addition, affordability for both buyers and renters is a significant issue, as people regionwide are spending well beyond their means for housing.

Hudson Valley Pattern for Progress, based in Newburgh, produces the annual housing report, and the 2015 numbers indicate that applications for conventional mortgages and home improvement loans have increased across the region when compared to recession-era figures from 2010. At the same time, government-assisted loan figures are down from 2010.

“The increase in conventional loan and home improvement loans is a positive movement for the economy; however, this is cautious optimism,” said Joe Czajka, Pattern’s senior vice president for research, development and community planning and executive director of the Center for Housing Solutions and Urban Initiatives. “Loan underwriting standards are relaxing a bit and values are increasing in some communities, but wages remain stagnant so the gains are modest and the recovery is slow.

“We want to see steady growth in the values of homes, which would be about a 4 to 8 percent annual increase,” he added. “Right now, appreciation values are not at that level.”

According to Pattern’s study, which was culled from 2013 data, Hudson Valley residents applied for 33 percent more home loans in 2013 than in 2010. The increases ranged from 4 percent in Sullivan County to 38 percent in Columbia and Westchester counties and 40 percent in Orange County.

This uptick came after conventional mortgage loan applications dropped 67 percent across the region from the pre-recession years of 2007 to 2010. 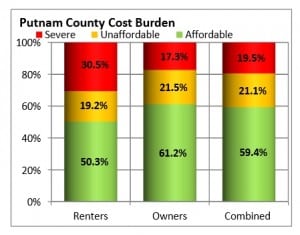 “The mortgage pendulum went from one side all the way to the other,” Czajka said. “Now it’s starting to swing back, but not to pre-recession levels.”

Meanwhile, wages have not kept up with the cost of housing, creating a significant burden for homeowners and renters. 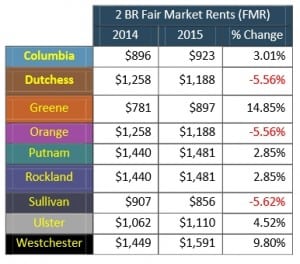 In Beacon, one of six municipalities highlighted in the study, nearly all of the homes on the market are considered unaffordable, based on Pattern’s metrics. The study defines “unaffordable” as homes in which more than 35 percent of a household’s income goes toward rent or a mortgage payment.

The median household income in Beacon is $96,000, yet the median price for homes on the market a year ago was $236,000 — well out of the affordable range. The same can be said for Dutchess County renters, 46 percent of whom use more than half of their income for rent.

Pattern’s analysis concluded that 90 percent or more of the homes for sale in the six highlighted communities — Beacon, Brewster, Poughkeepsie, Newburgh, Kingston and Peekskill — are unaffordable for a household earning the median income. 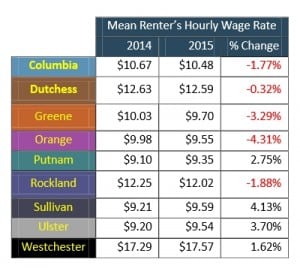 And while homes are selling in those communities, the disproportionate amount of income required for housing could affect residents’ retirement or educational savings in the long term.

In the short term, high housing costs leave households with limited dollars for other necessities such as food, clothing, healthcare and transportation, as well as discretionary spending, which impacts local and regional economies.

Czajka believes there are currently more renters than buyers in the market because of the short-term commitment of renting.

“People are leery of making an investment in a house and then having a job or life change and having to sell and move on,” he said. The full report is available at pattern-for-progress.org in its Reports Library.