That giant white writer’s space between intent and creation can impede many a potential scribe from putting pen to paper or fingertips to keyboard. The barriers can seem impenetrable, whether it’s an experienced author coming up against the notorious block, or a novice, jittery about testing the waters.

Cold Spring’s Susan Wallach, an Amherst Writers & Artists-trained (AWA) leader, has been facilitating writers’ groups and workshops in Philipstown and Beacon for a couple of years. They are conducted in series form, with six to eight weekly sessions, or in one-day intensive workshops; Wallach will be offering instruction again in early January. 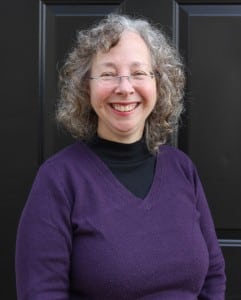 Susan Wallach (Photo by A. Rooney)

As with most AWA leaders (they are considered leaders, not teachers), Wallach began with a five-day leadership training group, learning about the very specific methodology of the program. An author, editor and proofreader, she had been taking some writing classes herself and “wasn’t happy. I felt I was just writing to produce for the class. I wanted a method to support a structure. Through a friend, I heard about AWA and decided to try it. I had never experienced writing in a group that way. I had a very destructive teacher in college and this was the opposite — I fell in love with it.”

The AWA guidelines stress positive feedback and encouragement, under a tenet of affirmations: • Everyone has a strong, unique voice.

These translate into positivity, according to AWA: “We tell the writer what was strong, what we remember, what stays with us after hearing the writing, what was powerful, well put or beautiful. Absolutely no criticism, suggestions or questions are directed toward the writer in response to a first-draft, just-written work.”

All work is done within the confines of the class; nothing is written at home and brought in except on the occasions when doing so becomes the prompt that week. Wallach supplies a writing prompt, or exercise, which can be used or ignored if the writer feels inspired in other ways. The prompts can take the form of poetry, or objects, smells, music, partial sentences or ideas, Wallach explains, and often involve specific visualization designed to trigger the writing flow.

“The prompts I look for are there to get someone in a physical, visceral, immediate sort of way — to evoke responses in a non-‘thinking’ way,” she says. A specific amount of time is given (it can vary from 10 to 30 minutes, and most of the weekly sessions are two hours long) and then everyone writes and is invited to share what was written, reading their work aloud. This is followed by response time. “We comment on what is wonderful in it,” Wallach explains. “Do the characters feel truthful? Responders don’t talk about the subject; we focus on the writer. My job as leader is to make that happen. Treating every piece as fiction allows people to relax about what they are saying; they don’t have to identify anything as true or not true.”

In turn, the writer’s response to the positive feedback is a simple acknowledgment of it. The writer doesn’t explain the piece at all; the writing does the talking. “We don’t talk about connections in our own lives, because that would take away from focusing on the writing,” notes Wallach, who adds that confidentiality is a mainstay of the groups. Leading these workshops has altered Wallach’s formerly held views on who can and should be writing. “Coming from publishing, where I believed that some people should never touch a pen in their lives, to now experiencing people having their own voice and way of expressing things … everyone has that ability though not everyone needs to be published,” she says. As a leader, Wallach also writes and reads her work in the class, getting in the artistic trenches herself.

Wallach, who has been living in Cold Spring for about 10 years, has had her hand in many aspects of publishing. She was an editor at Random House, and has done much freelance editing as well, some of it at advertising agencies. She calls upon similar skills in leading workshops. “My years at Random House, working with writers, were all about trying to get them to write the book they had inside them,” she says. “It’s the dream job of the editor to help get the best out of the writer.”

Wallach has published a number of middle-grade/young adult titles, including Operation Isolation, You’re Kidding and Great Parties: How to Plan Them. Her other projects include ghostwriting Grammar Girl’s Complete Guide to Grammar for Students for Henry Holt Books for Young Readers and Animals at Play, for Temple University. Through the New York City School Volunteer Program, she taught writing to fourth- and fifth-grade students in Brooklyn and Queens for two years. She is currently working on a novel.

Wallach’s groups attract writers of vastly different levels of experience. “People who have never written more than a letter have come and have come out with the most interesting things,” she says. “Others are writers of experience.” Many have returned for another group of sessions, which typically each involve six or seven writers.

Wallach’s next multi-session group will begin at Butterfield Library on Monday, Jan. 11. That workshop will run from 7 to 9 p.m. for eight weeks and is already close to being full. A second evening series may be added if there is enough interest. For those who prefer a daytime time slot, a Tuesday morning series will begin at the Philipstown Recreation Center from 10 a.m. to noon, starting Jan. 12. Wallach’s full-day workshops have taken place previously at the Botsford Briar, a bed and breakfast in Beacon. Those consist of an eight-hour day of writing, with a break for lunch.