Custom made, suited to urban firefighting

“This is going to be a fine apparatus for us,” said Chief Gary Van Voorhis about the 2015 Pierce Aerial Quint. “The main thing is that it’s versatile – it’s not just a ladder truck – it’s multi-purpose.” The vehicle’s four-section, 105-foot steel ladder is equipped with a built-in waterway and can service Beacon’s tallest structure – a 10-story apartment building.

Van Voorhis said the truck is more suited to urban fire fighting than the “bucket” ladder trucks used by the Fishkill and Rombout fire departments. Its narrower design also enables it to access a number of streets that were inaccessible to the platform truck it is replacing. That vehicle, the chief said, was more than 10 years old and had become costly to maintain. “The manufacturer went out of business, and replacement parts became very difficult to find,” he said. 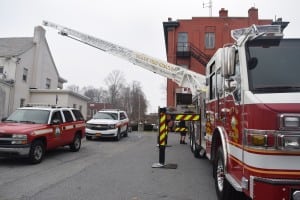 The 41-foot Pierce has seating for six firefighters and is equipped with front and side rollover protection and rear and side safety cameras. It can pump 1,250 gallons of water per minute, carries 600 feet of hose and holds 300 gallons of water. It is outfitted with 145 feet of ground ladders in addition to its aerial ladder.

Van Hoorhis said that the city budgeted $1 million for the purchase and that six manufacturers were invited to bid. “Pierce was the only company to respond,” he said, adding that the other companies indicated they could not stay within the $1 million budget. Located in Appleton, Wisconsin, Pierce is considered the leading manufacturer of fire trucks. “This vehicle was custom made,” Van Hoorhis said. “No one else has a truck exactly like this one.” 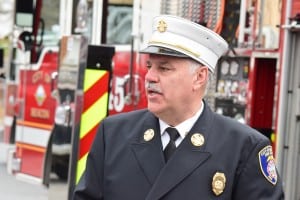 Charles Pisanelli, a Beacon Fire Department volunteer and a member of the specifications committee that helped guide the two-year purchase process, said the truck “does not have all the bells and whistles, but it has everything we need.” It come with a three-year, bumper-to-bumper warranty.

The department includes both paid and volunteer firefighters. Van Voorhis, who has been chief for the past two and a half years, said it has 12 career firefighters, all of whom are also trained as Emergency Medical Technicians, as well as about 30 active volunteers. The city has three stations: the Lewis Tompkins Hose station on South Avenue, the Beacon Engine station on East Main and the Mase Hook and Ladder station at the Main Street headquarters.

A number of studies have supported consolidating the three aging stations into one central firehouse. (See Beacon Reviews Merging Fire Houses, June 26). The department responds to about 1,600 calls a year. 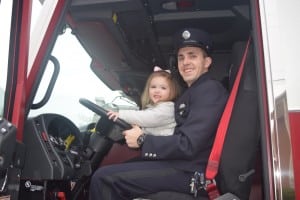