Whether you’ve spent New Year’s Eve in party hearty mode or curled up on your couch in an eggnog stupor, Quinn’s is the place for a cure in the guise of Beacon Music Factory’s third annual New Year’s Day concert. This year it will showcase Kelly Ellenwood and band performing Linda Ronstadt’s quintessential 1974 California pop-rock album, Heart Like a Wheel.

The concert also will feature the Beacon Music Factory’s Violent Femmes Boot Camp (one of the latest in BMF’s now-long string of musical incarnations) and Blue Vinyl, which consists of Beacon teenagers Miles Jakob and Leah Siegel. Beginning at the civilized hour of 3 p.m., the community is invited to welcome 2016 and revel in its first full day. 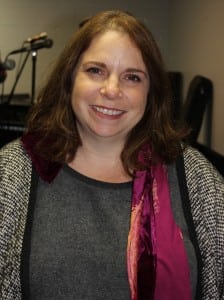 Kelly Ellenwood (Photo by A. Rooney)

Ellenwood and her fellow musicians — BMF’s Stephen Clair on guitar; Daria Grace on bass and vocals; JWhy on drums; Josh Stark on guitar and vocals; Kathy Vosman on violin and keyboard and back-up vocals from Ellenwood’s daughter Rhiannon, along with Siegel — will be throwing it back to Ellenwood at 12 years of age, when she played her Heart Like a Wheel LP nonstop.

“I think whatever you listened to at 12 — that’s your model forever,” Ellenwood says. Calling Heart Like a Wheel a “song cycle — it really does have a beginning, middle and end,” Ellenwood notes that some of Ronstadt’s biggest hits are on it. “They’re all covers, but you don’t remember anyone else singing them.” 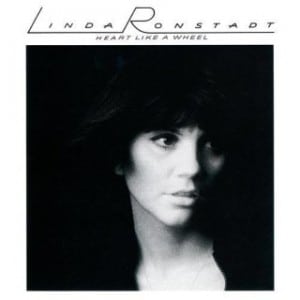 Ellenwood was also drawn to the album after reading of Ronstadt’s diagnosis of Parkinson’s and how it has caused her to stop singing. “That really resonated with me,” she says. “I lost my voice after an illness, and it was a loss of identity .… I was really ‘feeling her’ and got the idea to do this, though I had never sung any of these publicly. My voice now is not too different from what it used to be; I’m just not doing the real operatic extreme range-y thing I used to get paid for.”

This will be the performance’s second outing, after a November fundraiser at The Falcon in Marlboro.

Chicago to Broadway to Beacon

For Ellenwood, who is a board member and vice president of BeaconArts, this is a foray into a musical genre she hadn’t worked in during her professional life in music, which found her more often singing soprano roles on and off Broadway, in opera and in cabaret performances.

After the Nebraska native received her graduate degree in music from the University of Illinois at Champaign-Urbana (where, she says, she was known for her Schubert and French chanson recital singing), Ellenwood moved to Chicago and landed the role of Mabel in the new version of The Pirates of Penzance. That was soon followed by the tour of the Second National Company of Stephen Sondheim’s Into the Woods, in which she played the Witch. 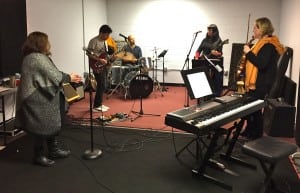 The Heart Like A Wheel musicians (minus guitarist Stephen Clair) rehearsing at Beacon Music Factory (Photo by A. Rooney)

Returning to Chicago, she performed in regional theater for a few years, while also writing grant proposals for a mid-sized theater company. She made her way to New York, where she spent several years appearing as Carlotta, the opera singer, in Phantom of the Opera on Broadway. Ellenwood currently teaches voice and works with music therapy graduate students at SUNY New Paltz.

The singer relocated to Beacon from New York City 13 years ago, after she and her husband became acquainted with the area during hiking trips. Needing to live somewhere within commuting distance of the city, and hearing that, at the time, a museum was coming, they thought “that’s a good thing.” With a young daughter as motivation, Ellenwood became involved in helping to get the toddler park built, becoming entrenched in the community through volunteer work.

Arts among the ”beautiful grit”

Around the time that her second daughter was born, Ellenwood shifted her focus to the arts, coming on board at BeaconArts in 2010, first as a member at large, and currently as vice president.

“I wanted to do something for the community and it was nice to turn to the arts,” she explains. “BeaconArts was and is definitely a volunteer situation: hands-on — by being on the board you can make things happens. If you have an idea and the other eight people agree, you can run with it in a hands-on, roll your sleeves up kind of way. Many people think it’s a larger organization than it is. We have a very active board and great membership. Fiscal sponsorship is a huge, important component and that’s what has really made BeaconArts work — supporting artistic visions and implementing them.”

She adds that “all projects are run by project directors, separate from BeaconArts, but BeaconArts supports them. Our original mission was promotion. We’re not a chamber of commerce, not an arts council, per se, but we’re definitely local, all about Beacon and the greater Beacon area. That’s why it’s successful; anybody can make a difference. You can go and talk to the mayor, the city council, and if your intentions are right and you have the willingness to work hard, it can happen.”

She adds: “We’re in the middle of strategic planning right now, and the challenge is keeping it real. As long as we can keep the neighborly feeling, a helping out spirit, we’ll be okay. We love entrepreneurs as long as they can stay true to what Beacon is — its working class heart.” Ellenwood feels that “everyone benefits from the new housing (being constructed in Beacon in 2016) as long as it doesn’t escalate wildly out of control. I don’t think it will. We’re still a community of tidy, sweet, affordable houses. The challenge is not to panic. As long as we can keep Beacon at a low simmer, maintaining its beautiful grit, too, we’ll be just fine.”

Also appearing at Quinn’s (the New Year’s Day Blowout is a family-friendly event) will be Miles Jakob and Leah Siegel, who perform as Blue Vinyl. Jakob, who attends Newburgh Free Academy, and Siegel, who is a student at Beacon High, perform mostly original material, which Siegel describes as “kind of a unique style — our inspiration is Ella Fitzgerald, but it’s not jazz. It’s a little bluesy but also a little alt, which we’re trying to move more into. We also do some covers but try to deconstruct them and make them our own.” 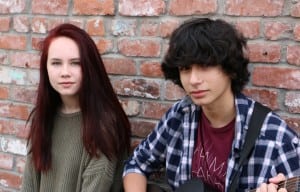 The teenagers have played together for two years and played at Dogwood and The Falcon. “We want to keep going with it, expanding our arrangements and also where we’ve been playing. Eventually we hope to record,” Siegel says.