Artist who died in November gained admirers on Facebook

On March 23, 2013, then 84-year-old George Knaus crossed the threshold into the land of Facebook. On April 1 he posted an etched self-portrait and updated not only his profile picture but the mode of bringing his decades of art to a wider audience.

Soon Knaus, a retired art teacher, was posting images of his work and conversing with a growing number of admirers. His sketches and oil paintings, usually given pithy and apt titles, appeared daily until mid-November 2015, just 10 days before his death. (His account, at facebook.com/george-knaus, remains a treasure trove not only because of his work but because of all the archived comments by him and those responding to his work.)

On Feb. 1, the Buster Levi Gallery in Cold Spring will showcase Knaus’s work in an exhibit planned while he was still alive, and now presented as a tribute. Knaus’s daughter, Lisa, who manages the pottery studio at Garrison Art Center, is helping to curate, along with Barbara Smith Gioia. 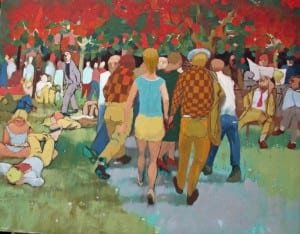 A Sunday in the Park with George, an oil painting by George Knaus (courtesy Lisa Knaus)

Born and raised in the Torrington, Connecticut area, Knaus also played the tenor sax and clarinet and, with his brother, formed the Knaus Twins Orchestra to play local events. He was drafted into the U.S. Air Force Band during the Korean War. After his service, he enrolled under the G.I. bill at the University of Hartford, where he studied art and music.

Living for a while in New York City, Knaus worked as a jazz musician and dipped into the art scenes all around him. Immersed in the abstract expressionist work of the 1950s, he embraced neo-realism in his own work, with much stimulation from shapes and color. Training as an art teacher exposed him to a broad variety of media and forms, many of which he continued to use through the years in his own creative work.

Lisa Knaus describes her father as someone content to remain in his corner of the world. “He rarely traveled and, outside of his time in the Air Force, never got on a plane,” she says, noting this was reflected in his art. “His landscapes are local, places he would drive to and park at, in weird places, draw, then come back and paint from the drawings. His still lifes were usually from stuff around the house. At the prep school where he taught [the Kent School in Kent, Connecticut], he found there was enough to keep him happy. You can see his love for his home in his work.” 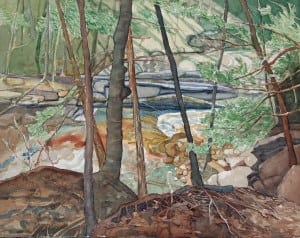 After retiring from teaching, Knaus moved in the mid-1990s to the New Paltz area and shared a home with his daughter and other family members for the duration of his life. Lisa Knaus says her father was able to stay at home, quite comfortably, until just a week before his death.

George Knaus did have aspirations to get his work seen by a larger audience, but “he resented the process and said, ‘Okay, then I’m just going to paint,’ ” said his daughter. “He painted for the sake of painting and wasn’t interested in going to the right opening at the right time … There was a pureness to his work, though he was never naïve — he had his cynical side. Humor was always present. He always had a twinkle in his eye, even when he was pissed off. He loved espresso pots — ours always went missing and then we’d find he used them in his still lifes. He was a very charming and old-fashioned gentleman, pulling out chairs for people when he could barely walk.”

Knaus’s adventures on Facebook began when he saw Lisa posting images of pots she had made. Soon he was a regular and made sure to post one image each day. It was on Facebook that Barbara Smith Gioia, then a colleague of Lisa’s at the Garrison Art Center, spotted his work. “Barbara saw a painting one day, commented on it and texted me a few days later, after seeing more, saying she wanted to do a retrospective,” Lisa recalls. 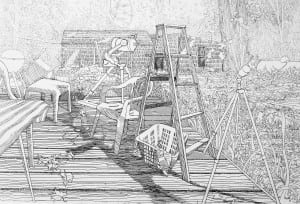 Smith Gioia, a member of the Buster Levi Gallery collective, knew that two months out of each year were left open for non-members, and she proposed a show during one of them. When Smith Gioia learned from Lisa of her father’s passing, she urged her to continue with the exhibition.

Lisa Knaus says that when Smith Gioia came to the house to help pick out the work, she responded to it “as a painter — she saw the brushstrokes, the composition, beyond just the images. She said, ‘Let’s go on with this, it’ll be beautiful.’ ”