After much discussion, the Philipstown Town Board has installed a secure prescription drug drop-off box in the lobby of the town hall. The box is intended to encourage residents to safely discard unused or expired prescription medications, especially pain-relieving but potentially addictive opiates.

The drop box is available from 8:30 a.m. until 4 p.m. weekdays, except holidays. No registration or even discussion is necessary to make a deposit. A security camera monitors the box and law enforcement officers from the Drug Enforcement Agency and/or the Putnam County Sheriff will empty the box on a regular basis. 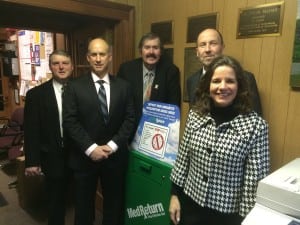 The Town Board and the Cold Spring Village Board have worked with the Philipstown Communities That Cares coalition (CTC) in finding a location for the box, which proved to be a bit of a challenge. Early considerations were stalled by contradictory and confusing regulations. Proponents thought the box needed constant police supervision, which further research revealed was not the case.

The creation of the box is part of the CTC’s effort to raise awareness of the illicit drug crisis and to take steps to curb drug abuse. Keeping prescription drugs out of the hands of young people is considered a key step in discouraging further exploration of addictive pharmaceuticals.

“We encourage everyone to dispose of any medications here, as this is a small but important step in preventing drug abuse and overdoses,” said Gina Van Nosdall, coordinator of Philipstown CTC, in a statement.

Van Nosdall credited Nancy Montgomery of the Town Board with doing the research and making calls to law enforcement agencies to determine what was permissible and also proposing to her colleagues that the box be located at town hall.

“It was time to stop speculating, and get this this critical, but complex job done,” Montgomery said. “On behalf of the Philipstown Town Council, I want to thank and honor the many Philipstown and Putnam organizations and community members that were united under this Philipstown Communities That Care advocacy banner. Caring together, working together—there is nothing that Philipstown can’t achieve for our kids and citizens.”

An application by the Town Board through the state for a federal transportation grant has produced $100,000 toward building a parking lot on Route 9D just outside of Cold Spring at the entrance to a popular hiking trail. The planned lot sits opposite the entrance of Little Stony Point Park. The site is already a well-used parking place with cars often sitting in chaotic patterns creating confusion and traffic disruption as other cars try to enter and exit the site.

As part of the beginning stages of the planned Fjord Trail project, Scenic Hudson will coordinate the work on the parking lot.

Another small upgrade that local and visiting hikers will appreciate is a new sidewalk along Fair Street next to Mayor’s Park. A sidewalk will make the Fair Street route to the trails a little safer for the pedestrians and drivers alike.

Shea said Assemblywoman Sandy Galef had helped with funding for this work through the state’s multi-modal transportation program.

Town board members plan to meet with Nelsonville officials to continue discussions of consolidating building departments under the town. They expressed interest in reopening talks with Cold Spring officials for the same purpose.

The state government, with the property tax cap as the main leverage, continues to urge local governments to find ways to share or combine services.