The tequila’s been flowing since Baja 328 opened its doors on Beacon’s Main Street just prior to Halloween last year. With 108 varieties on hand, all ready to complement the southwestern cuisine, its been a busy spot.

That comes as no surprise to its owners, brothers Danny, Frank and Gasper Maniscalchi, who, with a family background in the restaurant business, put a lot of thought into this one before opening. Situated in the rapidly becoming busier “middle” stretch of Main Street adjacent to Quinn’s, the owners are looking forward to the warmer temperatures of spring when they will be able to open the doors wide and turn the front part of the restaurant into an outdoor café. “Whenever we do that, our business doubles,” Gasper says. “People gravitate to it.”

Although their family business, Leo’s Restaurant Group, specializes in food from their heritage (hint: the names of their three restaurants are Leo’s Italian Restaurant and Pizzeria — located in Newburgh, Wappingers and Cornwall — the Cornwall branch having been in operation since 1981) the brothers wanted something different for Beacon. After spotting an article a few years back that alluded to Beacon becoming a “new Brooklyn,” they spent, according to Gasper, “three, four years looking for the right space; we could see how Beacon was growing.” 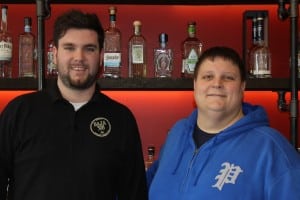 Frank devised the concept of southwestern food served in combination with a tequila bar. “We knew that tequila was ‘hot’ and could also see that Mexican restaurants always seemed to be busy,” Gasper says. “We didn’t want to do straight Mexican so we did a bit of studying, looking into different ideas, seeing what others were doing, and figuring out ways to do it better than them!” Beginning with a concept of “agave,” they arrived at their southwestern grill desert theme.

Hoping for a “trendy, more Manhattan” feel, they envisioned having at least one communal table, but it didn’t suit the space so they’ve altered that design into a large front room with a long bar overlooked by shelves stocked with tequilas, and higher than usual tables and chairs, all designed to keep patrons at the exact same eye level in that room. The adjoining rear area is narrower and stretches to the back. There, the tables are lower and the emphasis on dining. Country music plays throughout, and Gasper says the atmosphere is designed so that anyone can feel comfortable, from the 20s and 30s crowd at the bar and front tables to families and other diners — one couple in their 70s has been coming a couple of times a week since the opening. 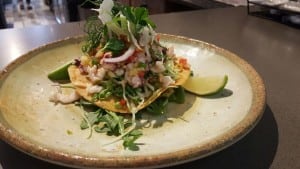 There are a variety of quesadillas, tacos and salads on the menu, the southwestern touches evident in the ingredients, which include a fair share of roasted corn and chipotle. “In a Bowl” selections include barbacoa chile and a rice bowl with a choice of pork belly, sirloin, chicken or beer-battered fish served over cilantro rice, avocado and Sierra Nevada black beans. Just want a burger? Baja 328’s got that covered, along with pulled pork, grilled chicken and more. The most popular menu item thus far, according to Gasper, has been chicken enchiladas.

As for the tequila, a separate menu is divided into three categories, blancos, reposados and añejos:

The tequilas can be served in “flights” or servings of three types, in a progression; mezcals, described as the “single-distilled, smoky cousin of tequila” are also on hand. 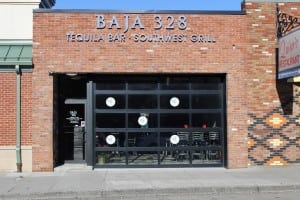 Baja 328 is located on the ”middle stretch” of Beacon’s Main Street (Photo by A. Rooney)

Baja 328 offers 100 varieties of margaritas. Specials are offered each week, and happy hour takes place Monday through Friday from 4 to 6 p.m. As well as participating in Hudson Valley Restaurant Week(s), which runs this year from March 7 to 20, Baja 328 will host a special event on Monday, April 4 called Tacos and Tequila, with Malcolm Mitchell, a Food Network chef working with Baja’s chef, John Franco. There will be a set price for two drinks and all-you-can-eat tacos. Normally the restaurant is closed on Mondays, but is open the rest of the week from lunch to late night.