Teachers call for board to extend interim’s tenure

The Beacon City School District hopes to take another step toward finding a new superintendent on Monday, March 28, by giving the district’s attorney, Michael Lambert, the go-ahead to find a professional search firm to identify candidates for the job.

The district has moved deliberately since Superintendent Barbara Walkley resigned in January — in part because interim chief Ann Marie Quartironi has filled the post competently — but school board President Melissa Thompson said Wednesday that she hopes the search will pick up steam soon.

“We have so many invested stakeholders right now, and we’ve spent so many years trying to improve,” she said. “But we’re not where we want to be. We need to get this search underway quickly.”

The past 18 months have, in many ways, been the climax of a decade of tumult within the Beacon district. Eight superintendents — five “permanent” and three interim — have presided over the district since the retirement in 2006 of Vito DiCesare. Since late 2014, the district has been rocked by accusations of impropriety, so much so that one parent petitioned the state Education Department to have Walkley and Lambert removed, while Walkley and former teachers’ union head Kimberly Pilla have a lawsuit pending against Pilla’s ex-husband for defamation and the “shredding” of their careers.

Thompson, a nine-year board member, has been on hand for many of those post-DiCesare searches, and she characterized this one as perhaps the district’s most “critical.” 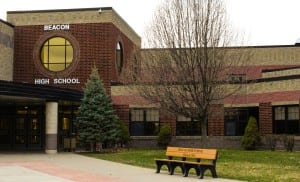 On Monday, the board is expected to give Lambert the feedback he needs to issue a request for proposals (RFP) to find a search firm. At their most recent meeting, board members were asked to review a handful of sample RFPs that had been used by districts in New York, Massachusetts and New Jersey to help Lambert craft one for Beacon.

Thompson said this week that she expects the search to go “far and wide,” and she hopes it will attract candidates with experience and the initiative to work in the small but diverse urban school district. “It’s important that we find someone who understands and appreciates the melting pot that Beacon is,” she said.

It’s impossible to predict how long that search will take, but current teachers’ association President John Burns said he thinks the board owes it to the community to hold off on making a hire until at least after the board elections in May, when three of the nine seats will be contested. In addition to the seat held by Thompson, who has said she doesn’t plan to run for re-election, those held by Christine Galbo and Tracy Everett will also be on the ballot.

As of March 23, three candidates have filed: Michael Rutkoske, the husband of Melissa Rutkoske, the parent whose petition sought Walkley and Lambert’s dismissal; Antony Tseng, a Beacon Volunteer Ambulance Corps EMT; and Meredith Heuer, the chairperson of the Beacon Arts & Education Foundation.

Burns has also urged the board to extend Quartironi’s tenure at least through the 2016-17 school year because of the stability she has brought to the position.

“The Board of Education needs to appreciate the job that Ann Marie Quartironi has done,” Burns said. “She’s held it together, and she needs to stay on for an additional year to get us through this.”

While the public has traditionally had a chance to offer its input into the process, the present search represents perhaps the first time that advocate groups have taken the initiative to proactively bring feedback to school system officials.

The Advocates for Beacon Schools (ABS) formed in August of last year as allegations surrounding Walkley began to surface, although organizer Kristan Flynn says the group’s vision is focused on the long term.

“The stakeholder muscle is pretty atrophied right now,” Flynn said, “but once it’s up and running, we want to become a resource [for parents and community members], because nothing like that exists here.”

In February, ABS unveiled the Vision Bus, a cardboard model school bus that members have toted to the Beacon St. Patrick’s Day Parade of Green, ball games, playgrounds and community meetings. At each event, members of the public are encouraged to fill out feedback cards, with the ideas and suggestions ultimately to be posted on the ABS website.

While ABS is not soliciting comments specific to the superintendent search, Flynn said, it is helping to create a “vision” for an improved school district, which could offer board members insight as they make long-term decisions. So far, more than 50 individuals and groups, including several students, have placed comments in the Vision Bus.

“If you ask people [in the community], they actually have something to say and share,” she said. “But they have to be encouraged — that you want to hear it, and that something might come of it.”