When the City of Beacon first began its monthly event known as Second Saturdays in 2002, it was a small-town affair. Dia:Beacon hadn’t yet opened at the waterfront, and Beacon’s arts scene consisted mostly of a few galleries and shops clustered near the west end of Main Street. Visitors could hit all the stops in less time than it would take to have dinner afterwards — usually in some place other than Beacon.

“It is now impossible for one person to see everything on Second Saturday,” said Dan Rigney, president of BeaconArts, the arts advocacy group that founded the event 14 years ago.

Today, Beacon’s cultural renaissance has expanded from the former Nabisco factory at the waterfront that houses Dia and a few West End galleries, to include the mile-plus length of Main and even Beacon High School. And it’s not just galleries. Bars, restaurants, distilleries and shops have gotten in on the act.

“You can stop into the real estate offices, or the Beacon Bagel, or Beacon Falls Cafe, or my store, and everyone’s got art work on the walls,” said Brenda Murnane, owner of Beacon Bath & Bubble. “It’s like every place is a gallery. If the lights are on, you go in.”

Rigney added: “Beacon is now attracting a wide variety of audiences. And that is thrilling to me, because it means Beacon has matured. There’s so much going on in terms of music, performance, places to gather, and it isn’t just special events anymore. It’s the whole experience of Main Street on Second Saturday.”

“It’s like a big night out,” added Murnane. “But without having to actually go anywhere.”

That’s a marked difference from the humble Second Saturdays of years ago. Once Dia opened, the city began attracting more cultural tourists from all over the world. The problem was figuring out how to get them to stick around.

“I remember going to a lot of meetings,” said Mei Ying So, co-owner of Artisan Wine Shop, with a laugh.

Artisan is one of a handful of Beacon businesses celebrating their 10th anniversary, a group that includes Beacon Bath & Bubble, Mountain Tops Outfitters, Beacon Pilates, Homespun Foods and Max’s on Main. Ying So recalled the times when she and her fellow business owners would meet with BeaconArts (then known as BACA) and ask how they could all attract more people to Beacon, and how they could get people visiting Dia to head up the hill. “Those conversations aren’t happening anymore,” she said. “Now everyone’s on board.”

Artisan Wine hosts tastings every Saturday, and over the past decade she’s noticed not only an increase in the number of people coming by, but the length of time they stay.

“We have so many more restaurants and, thanks to Airbnb, we have so many more places to stay,” she said. “That’s allowed people to stay over for the weekend. We might see them again on Sunday. They’re not just here for an opening and they’re going to go home that night.” That translates into more sales, as revelers who are in town for the day are less likely to make purchases.

According to Katy Behney, who co-owns Mountain Tops and Bank Square Coffeehouse with her husband Buddy, gallery hoppers don’t want to have to carry their purchases up and down Main. Then again, once the weather warms up, the Behneys usually can’t afford to keep Mountain Tops open late anyway: They’re too busy across the street at Bank Square, whose expansive and illuminated patio serves as the unofficial gateway to Main Street. “There are not too many other places where you can sit outside on Main Street with your beer,” she said.

And Main Street is, as always, the place to be.

“It was very important for us to be on Main Street, to be part of the community,” said Mike Usifer, who’s holding the official grand opening of his new recording studio Beacon Soundworks (beaconsoundworks.com) at 395 Main this month from noon to 7 p.m. on Second Saturday. 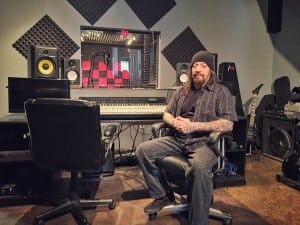 Mike Usifer at the boards of Beacon Soundworks, which will celebrate its grand opening on April 9. (Photo by B. Cronin)

Like the Behneys, Usifer was born and raised in Beacon. Bringing music to Main Street has been part of his family’s history for generations. During World War II, his great-great uncle Joe Usifer ran a marching band that led a parade of the men of Beacon who were shipping off to war. When the troops returned, Usifer’s band was there to greet them at the Hudson and march them back up Main.

By the time Beacon Soundworks has its official opening, Usifer will have recorded an alternative rock trio from Newburgh, a thrash metal band from New Jersey, and rappers who come to the studio via the Metro-North train from New York City. “Our rates are a lot cheaper than what they’d pay for studio time in the city,” he said.

Like other Beacon businesses, Usifer is hanging work by local artists for Second Saturday, but he’s also putting out locally made instruments for visitors to pick up, play and purchase. He’ll also be hosting free concerts all afternoon by local acts.

“We want to help out other artists who don’t have their own gallery, can’t find a place to show their stuff, or maybe, like the instruments, they’re not really the kind of work that shows in galleries,” he said. “Beacon is a special place, and it’s all the people here in town, working hard at this, that keeps it vibrant.”