Joe Virgadamo has been the Haldane boys’ basketball coach since 2006. This season the Blue Devils, for the first time in school history, reached the Class C state championship game played at Glens Falls Civic Center. The season before, Haldane reached the semi-finals.

After graduating four of five starters, the team looked only average for most of the 2015-16 season. But it caught fire in the post-season, winning a handful of close games against ranked teams. Virgadamo’s responses have been edited for space.

Q: When did you really believe this team could make it to Glens Falls? Very few people saw this team winning Section One, let alone making it to the state title game.

Virgadamo: Last year when we made it to the semi-finals, we had a strong senior class. After the season, the coaches drew up what we thought would be our team, tried to piece it together. It’s easy to say, “We’ll be back.” But will we be back? We returned point guard Tucker Beachak. We returned Will Zuvic. Our goal was to be .500. Some people would think that we’re not challenging ourselves, to aim to be .500, but we play a tough schedule. We play bigger schools.

It wasn’t easy. We were struggling chemistry-wise in December. We were struggling with roles on the team, with some guys trying to do too much and some guys trying to do too little. But the work ethic was there. And then mid-season, we beat North Salem and we started to connect the dots. Tucker was realizing that he needed to be a scoring point guard. Will was realizing he needed to be our rebounder and our scorer. And he was becoming a great passer. Like on some of the back door cuts to Eric Rizzi. The role players were doing a lot. Blaine Fitzgerald ended up doing a lot more offensively than people thought he would. 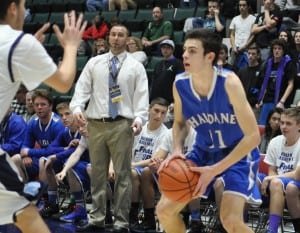 Coach Joe Virgadamo on the sidelines during the Class C finals at Glens Falls. Tucker Beachak (11) has the ball. (Photo by Peter Farrell)

Were we mentioning Glens Falls in practice? Absolutely not. We were just going with it. But we were doing the 27 jumping jacks, trying to reach that 27th game in the season. And there’s always a team that peaks at the right time and gels. And we were fortunate enough to be that team. It was fun.

Q: Zuvic was playing forward in 2015. How did he evolve into a center?

Virgadamo: Will really worked on his post-up game. He put the time in. He bought in and went with it. He felt some discomfort early on, but … he started getting some muscle memory [from repetitions in practice] and he began to realize that no one in Class C could stop him. There were multiple games where he had double doubles.

Behind the scenes, we do a lot of breakdown work, separating the guards and the bigs. He did a lot of work on his own. He’s a gym rat, him and Tucker. Every time I’d pull into my parents’ driveway on Church Street, I’d see him out there in the winter, shooting after practice in his driveway, with the little street light down the block. It’s fun to see that. You don’t really see that anymore.

Q: What kind of work did you do with Beachak? In 2015, he was a pass-first point guard.

Virgadamo: Early in the season there were some games we lost because Will and Tucker didn’t shoot enough. I’d tell him, “There are nights you’re not going to shoot well, but you have to keep shooting.” He’d go to All Sport on nights after we lost and he’d shoot for an hour and a half. He was the MVP of Class C Section One. We don’t go to Glens Falls without him. Sometimes I thought I was too hard on him. And he said, “Be hard on me, coach, I want to get better.” It’s great to have coachable kids. We’re lucky to have that here at Haldane.

Q: Can you talk about the transition of Blaine Fitzgerald? He had played junior varsity the previous two years.

Virgadamo: We told him, “We’re going to expect a ton out of you.” In practice, we tried to make his strengths better and turn his weaknesses into strengths. Sometimes we’d take him aside and work on his post moves. Against Stony Brook, he did a spin move and a finger roll and people were like, “Where did that come from?” The last game Blaine led us with nine points and nine rebounds. Blaine surprised me. He took it on. He did what was best for the team. The teams that are playing in March are coachable and unselfish. We had three seniors who didn’t play at all, but they played hard in practice and were energetic on the bench.

And I think what Nick Chiera did in the 3-2 zone was overlooked. His length up top, the way he rotated. There were games where he didn’t score much, but the coaching staff was very pleased with his effort. A lot of guys did a lot of little things to improve their games. We give guys three things to work on over the off-season such as ball-handling or shooting and these guys put in the work.

One time David was laughing and the JV coach asked what’s so funny, and he says: “I just can’t believe it. I’m a baseball player, I’m not even a basketball player. How are we doing this?” We have a couple guys who play basketball year-round, and then a lot of guys who play other sports. But in many sports, things like spacing and ball movement are the same.

We didn’t blow anyone out. We won so many close games. Lots of little things had to happen. Someone showed me a stat that said we were the only team at Glens Falls that didn’t have a 1,000-point [career] scorer.

On the way home from Glens Falls, Will said, “Coach there’s one thing we left with the program, it’s that anything is possible. Hopefully we left that with the school.” I told him: “You know what I’m excited about is that you just made my job easier, because we’re going to use what you said and tell it to every team that walks in the gym.” These guys showed what can happen when you buy in.