Republicans will have one

Democratic Rep. Sean Patrick Maloney will not have to face a primary race this June. Potential challenger Diana Hird failed in an effort to gather sufficient voter signatures to qualify for a place on a primary ballot. The deadline for filing signed petitions was Thursday, April 14.

Unfortunately we missed getting on the ballot by 44 signatures. We worked hard, we learned a lot, and most of all, we created community. This is a beginning, not an end. I like to think we made a small difference just by being involved in this process and making our voices heard.

New York state election law requires candidates to file a minimum of 1,250 signatures of registered voters, in this case Democrats, who reside in the district. Typically campaigns seek to file in excess of the minimum as inevitably some signatures are disqualified for a variety of reasons.

According to the New York State Board of Elections website, Maloney appeared to have filed nearly 5,000 signatures. The Congressman also filed for the Women’s Equality, Working Families and Independence Party ballot lines.

Both New York Republicans and Democrats will vote this coming Tuesday for presidential candidates. Both parties’ rules require candidates to win congressional districts to obtain most allocated delegates.

For the Dems, Hillary Clinton continued to lead in most polls by 10 or more points as she campaigned largely in New York City. Nonetheless, Bernie Sanders has drawn enthusiastic crowds as he campaigned hard in nearby Poughkeepsie, with plans for a rally in Newburgh. 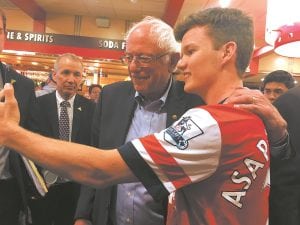 Polls expect Donald Trump to win more than half the Republican primary votes. He also scheduled a rally for Poughkeepsie. Rivals Ted Cruz and John Kasich hope to cut into his lead with possible wins in individual congressional districts.