A mighty steamboat plies the waters of the Hudson, bringing city folk north to marvel at the scenery, revel in the region’s history and savor the construction and stylishness of the vessel itself.  If this conjures the maiden voyage in 1807 of the first of many craft produced by Robert Fulton, or perhaps 1863, which saw the launch of the first Day Line sailings between New York City and Albany, fast forward to 2021, when the organizers of the SS Columbia Project (SSCP) hope to return this craft to the river.

What started as a desire of the late art dealer and preservationist Richard Anderson to bring the excursion steamboat, built in 1902, back to life, has now been taken up by many. The effort is in the intermediate stages of a carefully considered timeline, with its goal to use the Columbia to carry tourists and students. 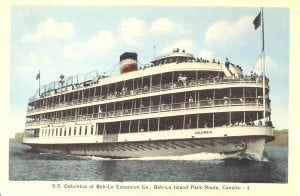 Its many decks filled with passengers, this vintage postcard is from the SS Columbia’s heyday, voyaging between Detroit and Boblo Island Park.

The vessel was restored in Detroit and now waits in Buffalo. If all goes well, it will be brought down the river to New York City for a celebration and then up to Kingston by the summer of 2017, where a four-year build-out restoration will begin.

The SS Columbia, the oldest remaining excursion steamship in the U.S., was listed on the National Register of Historic Places in 1979 and designated a historic landmark in 1992. The 208-foot-long, 60-foot-wide vessel was designed by naval architect Frank E. Kirby in collaboration with painter and designer Louis O. Keil and constructed by the Detroit Dry Dock Co. 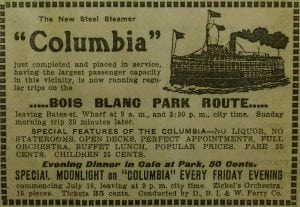 A period advertisement for the then just-completed SS Columbia and its sailings.

Designed to carry 3,200 passengers on five decks, the Columbia was famous for its large open-air ballroom, mahogany paneling, gilded moldings and a grand staircase: the stuff of dreams, and yet accessible not just to the wealthy. In service for 89 years, most of those were spent ferrying leisure day-trippers on an 18-mile journey from downtown Detroit to an amusement park and dance hall on Canada’s Bois Blanc Island (commonly known as, and pronounced, as Bob-l-oh). That trip is entrenched as a fond, nostalgic memory of many middle-aged and elderly Detroiters.

As times and leisure pursuits changed, and with the vicissitudes of the economy, in 1991 Boblo Island closed. Over the next two decades the Columbia slowly deteriorated at a Detroit pier until Anderson discovered it while searching for a boat of that type that could be restored. Many Detroit volunteers, active in the historic preservation community there, helped launch the restoration. 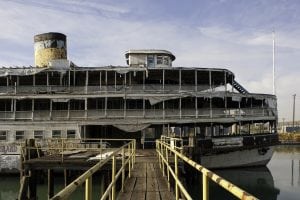 An initial investment resulted in the installation of steel plates and the removal of zebra mussels from the hull. This enabled the Columbia to take the first step in the voyage east when it was towed to dry dock in Toledo in 2014. It was there for a year for hull restoration work before traveling to Buffalo, where this past year restorers replaced the rotting decking and framing and enclosure of the engine room casing. (To follow the progress, visit sscolumbia.org.)

What doesn’t need extensive re-working is the steel skeleton of the vessel, which, according to SSCP Executive Director Liz McEnaney, is in great shape, along with the 1,200 horsepower engine. Though the boat originally ran on coal, it has not used that fuel since the 1930s and the SSCP is exploring environmentally friendly fuels. 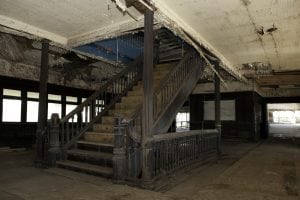 A wooden staircase aboard the SS Columbia survives, but is in need of major restoration. (photo provided)

The SS Columbia is attracting much attention in Buffalo. In addition to restoration work, the SSCP is running and testing educational programs in hopes of someday making the vessel a “floating platform for arts education,” McEnaney says. The SSCP has partnered with the Buffalo Theater Company to develop a site-specific theater piece. “Buffalo is the first place where we can get people on board, in limited numbers,” McEnaney says. “And this boat is meant to have people on it — it transforms” when they are.

All this costs a great deal of money, of course. The SSCP has raised $4 million of the $5 million needed to tow the boat up the St. Lawrence River (it is too large to pass through the Erie Canal) from Buffalo to New York City, according to McEnaney. Once docked in Kingston, another $15 million will be needed to complete restoration. In January the project was awarded a $500,000 matching grant from New York State’s Environmental Protection Fund Municipal Grant program. 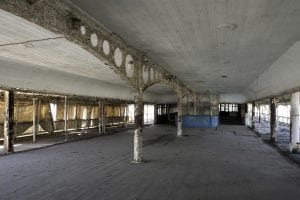 The open-air ballroom of the SS Columbia. It is hoped that restoration of this area will take place in Kingston. (photo provided)

If the project meets with success, the Columbia will be able to carry 2,000 passengers at a time up and downriver. McEnaney says the hope is that revenue from special events will offset the cost of programming and passenger trips. “We’ll start slowly, test the operations of the boat, test the market,” she says. “We’ll begin with trips probably once a month before increasing that number.”

Philipstown’s Fred Osborn III is co-chairman and treasurer of the SSCP board (and also a board member of Highlands Current Inc.). His enthusiasm for the endeavor is palpable. “The SS Columbia Project has brought together an incredible group of accomplished people who share a dream of having a real steamship plying the waters of the Hudson once again,” he says. “The dream is within reach.”

McEnaney says the SSCP has been busy talking to the many river towns and cities where the boat can dock. “We see ourselves as one piece of much larger regional economic development,” she says. “In Kingston there’s a waterfront plan with hotels. We can move tourists from New York City to the Hudson Valley, recreating a mode of travel which existed through the greater parts of two centuries.”

3 thoughts on “Project Hopes to Put Steamship Back on Hudson”