You know those field trips where kids seem more fidgety than focused? Where educators wonder if they’ve imparted any lessons at all? Well, sometimes they work. Brian Arnoff remembers one from when he was in second or third grade and his class went to Sprout Creek Farm in Poughkeepsie.

“I vaguely remember a project, planting pumpkins — it was very exciting,” he says. “I took mine home and planted it in my grandfather’s garden, where it grew the whole season.”

Mix in a mother and two grandmothers who loved to cook and you have the recipe for the creation of a nascent chef. Arnoff, who began his culinary career at age 15 with a job in the prepared foods department at Adams Fairacre Farms, is the chef and owner of Kitchen Sink, which has been open on the west end of Beacon’s Main Street since August. 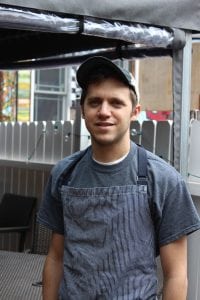 Brian Arnoff (photo by A. Rooney)

Kitchen Sink, which Arnoff describes as “great food, produced with great local products” is the culmination of a year of planning. The menu at the small restaurant (24 seats inside and a slightly larger seating area than that in the back garden) follows the trail of local produce, with items changed over seasonally and fine-tuned depending on what’s abundant and savory.

After peeling a lot of potatoes and chopping up a lot of onions at Adams, Arnoff advanced to working in a pizza place, then a restaurant and a banquet/catering hall before heading to Boston University, where he studied hospitality management and got a background in marketing, accounting and law, all of which are useful in running a business, such as in calculating the cost of ingredients and “plate yields,” Arnoff explains.

While at Boston, Arnoff spent a semester at the Apicius International School of Hospitality in Florence. He says the time in Italy had a profound effect on his cooking style, giving him a deeper appreciation for seasonal and regional cooking. As a college student, through a stroke of luck, as he describes it, he was able to work for James Beard Award-winner Barbra Lynch.

“I wound up working for her company for two years, starting in catering and winding up being a part of the opening team for her new restaurant, Sportello,” he says. “It was entirely new for me, the first time working with fine dining, working with chefs who were very particular about how vegetables should be cut, where things were sourced.”

After stints at the Four Seasons, first in Boston, and then Washington, D.C., Arnoff felt it was time for a change. “I couldn’t spend five years being a sous-chef and then another five to become an executive chef,” he says. “I saw an opportunity instead to open a food truck. I put together a business plan, created the concept and menus and bought a rickety old truck from my dad and had it retrofitted. We worked our way through the regulatory process — we were one of the first 10 food trucks in D.C. and it was uncharted territory.” 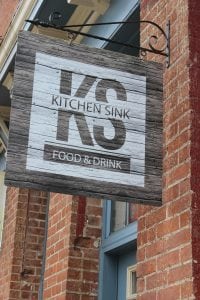 Kitchen Sink opened in August (photo by A. Rooney)

Called CapMac, the truck specialized in macaroni and cheese and other pastas, and was “roving,” parked in a different location each day, serving university students to federal employees.

After a couple of years, Arnoff, by then married, decided he wanted to return home to the Hudson Valley, an area where food was actually being produced, and leave the narrow range of what he was able to cook in D.C. After a year-long search on both sides of the river, Arnoff found the right space at 157 Main St. in Beacon.

“I knew Beacon was humming, and being on Main Street, with its foot traffic, was a big benefit,” he says.

From the start the food focus has been “locally sourced but globally focused,” he says. “The menu has influences from my travels and also from my family background.” That is reflected on the menu in the form of the kreplach appetizer (described as crispy brisket-filled dumpling, gravy), which is much as his grandmother used to make it, and a new one added for spring, fiddlehead fern toast, which combines the Challah heritage with of-the-moment ingredients like fiddleheads.

The menu changes depending on the ingredients available, and there aren’t complete seasonal overhauls — it’s more like an alteration of an item or two at a time, he says. Sometimes it’s a partial shift: winter’s fondue contained fingerlings, carrots and turnips while spring’s features asparagus and spring garlic.

Current entrees include a popular beer-braised pork lasagna, cauliflower faux risotto, spiced lamb meatballs with ancho maple glaze, crispy panisse and sweet potato puree, as well as the 24-hour hanger Banh Xeo, a Vietnamese crepe, containing steak which has been cut in house, given a sous-vide treatment. The tender meat is then seared and served with a chili citrus glaze and a pickled vegetable salad.

Arnoff is looking forward to working with peas, fava beans and, a bit later, the 12 to 14 varieties of tomatoes grown on the small Hyde Park farm run by his mother, Lisa, who spent a season working with the Poughkeepsie Farm Project. “We’re working to grow the restaurant and the farm in tandem,” Brian says. “I knew that the farm was there as a resource waiting to be utilized.”

Complementing all this is a selection of almost exclusively New York State wines, beers from the tri-state area, hard ciders, bread baked in-house and flowers from local purveyors.  Desserts include beignets and a bourbon coffee-chocolate cake.

Kitchen Sink is open every day except Tuesday. Dinner service begins at 5 p.m., and on Monday it serves only a fried chicken dinner. Reservations for groups of five or fewer may be made online at kitchensinkny.com or by calling 845-765-0240 after 3 p.m.