Marnie Henricksson has hung up her chef’s apron and is shifting her energy to sleeping instead. No, the owner of Marnie’s Asian Kitchen, the restaurant she ran in Putnam Valley for many years and, in a pop-up edition, in Cold Spring last summer, is not getting some shuteye, she’s simply doing something different now.

Hudson Natural, a new retail shop located in Beacon’s east end, featuring all-natural bedding, mattresses, home goods and textiles, is about to open — a soft opening is planned for May 7, while the official takes place on Second Saturday, May 14.

“I like having my own business,” Henricksson says. “I tried doing food again, but it didn’t work out,” she said, referring to her culinary history in the region: After Henricksson closed up her popular restaurant, much to the dismay of her loyal customers, she decided to cook again, on a much smaller scale, in a pop-up kitchen which operated out of St. Mary’s Church in Cold Spring, but it lasted only a couple of months before being foiled when the church was told it would have to make major modifications to their kitchen to accommodate a commercial enterprise. 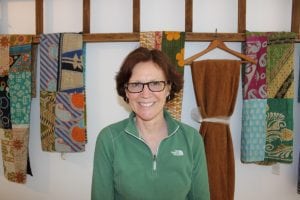 Hudson Natural’s Marnie Henricksson, pictured in front of some of the textiles the store features. (Photo by A. Rooney)

“I thought about opening another restaurant, in a commercial space in Cold Spring, and looked and looked during the fall, but it was impossible to get a new food business space and no one there is going anywhere,” Henricksson says. “I just lost the enthusiasm, as the process is grueling.”

Meanwhile, after shuttering her restaurant, Henricksson has not been idle. She has spent the past four years working for Healthy Choice Mattresses, a company which manufactures handcrafted organic mattresses, made in Connecticut with materials produced in the U.S.

It has four retail stores, including one in Mount Kisco, where Henricksson spent most of her time. Looking at this region, Henricksson determined that there was no organic mattress store between Westchester and Albany, and with Hudson Natural, which sells these mattresses, along with other products, she is remedying this, opening what she describes as “a very personal little store. … I’m it — running it myself. We’re open five days a week, closed Tuesday and Wednesday.” 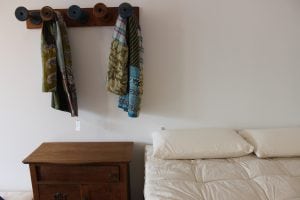 Organic mattresses and bedding, along with colorful textiles, are Hudson Natural’s mainstays.  (Photo by A. Rooney)

In stock, along with the mattresses, are an assortment of textiles, in the form of throws, pillowcases, quilts and more, made in Asia, using forms like the Indonesian ikat. After living in Tokyo years ago, Henricksson took a long trip back through southeast Asia. “I always loved the textiles and brought home a lot of stuff. You can find some similar things online, but you don’t know the story behind them — how the people making them are treated. I’m starting with a few things I know are done right.”

Hudson Natural also sells organic cotton sheets from South Carolina’s Organics and More. “All of their cotton is grown in the southwest U.S. and is certified GOTS — Global Organic Textile Standard.” There are also organic wool accessories, including a 3-inch topper, comforters and pillows, and a line of vintage Indian saris repurposed into throws, which Henricksson calls suitable for use as picnic blankets or draped at the bottom of a twin bed. There are lots of bedding items for infants, befitting the Beacon baby boom, something Henricksson has been taking note of, watching the passers-by.

The mattresses, all made to order, are toxin-free, made from talalay latex, a natural rubber, produced in Connecticut. “Our mattresses are not treated with chemical flame retardants, and there are no petro-chemical emissions from the foam core. There are two inches of organic wool under the cotton and thin pads of liquefied sand act as fire barriers. If you’re going to do anything natural in your life, make it your food and your bed — you spend so many hours there — it’s an investment,” Henricksson says.

Adjustable bed bases from Leggett and Platt are also for sale.  Delivery, by someone associated with the store — “He knows what he’s doing,” Henricksson says —  is available throughout the area. 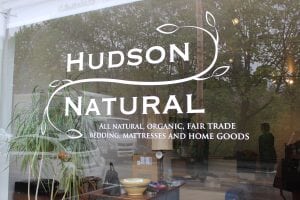 “I feel lucky to have this store,” she says. “I believe people will come to Beacon from areas like Rhinebeck, Hudson and Millbrook — of course I welcome people from nearby, too.” Henricksson intends to hang artworks on the walls of the serene store, once she gets things up and running. “One great thing about Beacon is that you can participate in the art community without having a gallery. I’d love to promote anything I can.”

Of the location, around the curve of Main Street and a few blocks down, near The Hop, across from condo developments and associated new retail establishments, Henricksson isn’t concerned, saying “Being away from heavy retail is okay. We’re a destination store.” Henricksson is happy to be in Beacon. “Beacon’s development took a while, but doing this now feels right.”

Hudson Natural is located at 544 Main St. As of now, information can be found at hcmattress.com, but a website and Facebook page are under development. For more information, call 845-440-6019.