“Our character formation is a source of pride to us”

At Newburgh’s San Miguel Academy (SMA), things happen a little bit differently than other middle schools. Inspired by and part of the Jesuit “Nativity Mission School” movement, which began in New York City’s Lower East Side in 1971, SMA is emblematic of Nativity’s focus, which is on breaking the cycle of poverty through character development as a means toward educational achievement.

Run by Rev. Mark Connell, a Catholic priest, SMA has 65 fifth- to eighth-grade boys from Newburgh families. The majority (70 percent) of SMA’s students come from a Latino background; the remaining 30 percent are African-American.

Despite the cheery haven of carpeted hallways, lined with positive visuals reinforcing the school’s core values of faithfulness, honor, truth, compassion and self-governance; weekly “creed award” winners (given to the student who displays the most “not quitting” that week); and a national map covered with pushpins indicating where SMA graduates have gone to high school, the knowledge of the difficult environments these boys have had to deal with is ever-present. The school’s website describes Newburgh’s struggle finding a place in the new economy — difficult when there’s an average household income of “$30,300 … a stunning 35.35 percent of residents under the age of 18 live in poverty … in short, there is perhaps no other population center in New York state with a greater need to provide its young people with an educational outlet …” 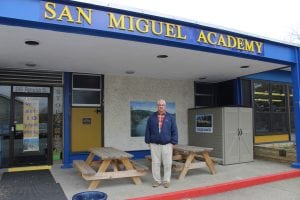 As Fr. Mark, as he prefers to be called, puts it “There are complex issues involved here, and we can help them retain information for longer periods of time with experiential learning. Many of our boys have a lot of trauma-based disorders, which impede their learning.  Brain structure is altered by living in a violent environment.”  SMA, an independent, nonprofit school not under the guidance of either the diocese or the local school district, features extended (until 5:30 p.m.) school days, plus complementary activities taking place on Saturdays and over the summer, thus giving the boys a support and structure sometimes lacking at home. The education program is designed to incorporate academic, social and spiritual dimensions, and the support of the students doesn’t end with the handover to high school time, but instead continues through and beyond the transition to college and/or adult life.

Peering into the classrooms, one notes the low student-to-teacher ratio (each grade constitutes one class of around 16 students), and the obvious engagement. The credentialed educators, each of whom holds a Masters degree, collaborate on an innovative cross-disciplinary curriculum. “The teachers are the biggest piece of the puzzle. They are stakeholders in the mission, and we have consensus leadership; they are very dedicated people. As an independent school, we have the luxury to innovate — we’re not bound to the Common Core, and it’s fun because we’re innovating on behalf of a demographic that’s underperforming … None of this is seat of the pants, it’s all research-based,” says Fr. Mark, adding, “We encourage relationships between teacher and student that draw the best out of the boys. Voices aren’t raised here; people talk to each other.”

In a humanities class, literature supported the study of history, and a book was being read to the students. “Nobody reads to low-income kids when they’re little, so they’re mesmerized,” Fr. Mark added. The teacher asked questions about reverse psychology and provided the students with thoughts on inference as a path toward understanding the main ideas. In a nearby math class, boys worked in pairs, using electronic tablets, while another grade was at work on CAD (computer assisted drafting) project in in the computer lab, which is outfitted with new desktops and three 3-D printers.

It’s not just classroom learning at SMA. The school partners with many regional entities. The students visit Mohonk Mountain House once a week for outdoor activities tied in with the academic curriculum. The fifth-graders visit Sprout Creek Farm weekly, learning and working with the goats there. The frequent nature of these programs is intentional: “Most schools do field trips a few times a year and it’s raucous, like a day off, but this is learning, for us, experiential; our boys are so engaged,” Fr. Mark says. 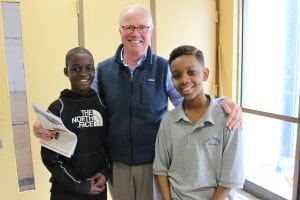 To fund this nascent school, Fr. Mark turned to his Chappaqua congregation, and received an enormous outpouring of support, right from the start.  This support continues to this day, as SMA is funded completely by donations from individuals, corporations, trusts and foundations. “One person doesn’t start this.  I had the blessing of being in the Chappaqua parish for decades.  I realized a bridge had to be built between these two communities — and it has — most of the original founding council members are still on board. This has always been about collaboration.  The school is owned by the board of directors — lay people. There is no church support.” From idea to opening, which included obtaining state approvals, took around two years and SMA opened, in what had been another school building, in July 2006.

There are more applicants for SMA, which is free of charge, than available openings. Most of the parents, as described by Fr. Mark, are “the working poor. Many are doing several minimum-wage jobs. Built into our admissions process is building a relationship with the adult who is getting behind the kid.  It may not be a parent — could be a grandmother or other relative who has custody. Some boys self-start, but most need an adult partner. Most of our parents are engaged and we have regular meetings with them. When we need them they are here to help us.” SMA accepts IEP (Individualized Educational Plan) and 504 Plan (both relate ensure that a child who has a disability identified under the law receive specialized instruction and related services) students; there is a special education teacher provided by the district.

When it comes time to move on to high school, the school meets with both the child and the supervising adult and a big “What do you want?” conversation ensues, as placements are made locally, regionally and sometimes to boarding schools within a several-hour radius of home.  “If a mom says ‘I don’t want him to go away’ we honor that; at the end of the day it’s a parent’s choice.” But most do, and then Fr. Mark calls upon his increasingly large network of colleagues at prep schools to interview select children and, hopefully, accept them. To assist students in the galvanizing transition to these vastly different socio-economic academic institutions, a special fund provides the boys with all of the material resources they need to “fit in,” whether it be a laptop or a blue blazer.  The biggest assist, though, comes in the interviewing counseling and other presentation of information to the boys who choose this route, so as not to have them be overwhelmed by the process and, if successful, during their first year of high school. 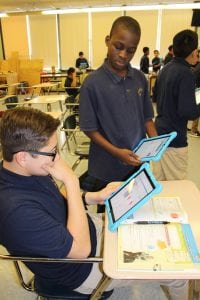 San Miguel Academy students compare ”notes” on their tablets. ( Photo by A. Rooney)

As for the religious component of the education, Fr. Mark explains: “It’s Catholic because I happen to be a priest and our first benefactors are Catholic. But we have an open policy of faith affiliation.  There’s not a lot of catechism here; we direct families to do it at home or church.  What we are very strong on is character formation as an umbrella to all faiths.  Becoming responsible citizens is our goal and our character formation is a source of pride to us at our 10-year-mark.  Our boys are able to rise above what’s happening around them.  We give them very strong signals all day long on how we treat other.  That makes our boys stand out. By getting them when they’re young and more malleable that influences them time and again.”