“I always have a loose plan, but it takes another turn as I follow what my hand does.”

Score two in a row for Haldane High School, as, for the second year running, a Haldane student has walked away with top honors from the Putnam Arts Council’s annual student showcase, which is the culmination of the county-wide Emerging Artists exhibit. 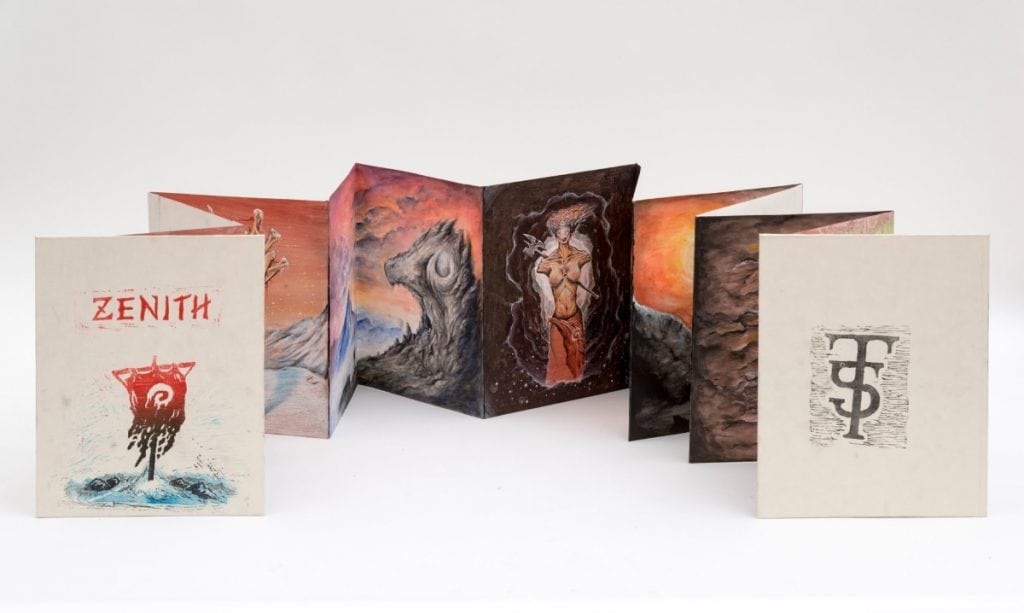 This year’s winner is sophomore Jonas Petkus, whose piece “Zenith,” actually a ‘book’ of his work in painting and pencil, developed partially at a three-week pre-college workshop at NYC’s School of Visual Arts last summer, lived up to its name, being chosen from about 100 entries as best in show.

An artist since early childhood

Petkus has felt the urge to draw “from the time I could hold a pencil.” Even in elementary school, Petkus knew that “I liked to do it and kind of knew I was better at it than a lot of kids my age — it was my thing.”  The skills he had and has are innate, as that summer class was his first experience in an art school. “I didn’t want anyone messing with my style, so I was completely self taught until then.”

However, the class proved valuable to him in many ways, exposing him and pushing him to try different media, pulling him away from the colored pencils he favors, and to complete a form of narrative, guided by prompts (color, animal — he chose a mountain goat, transformation). It also served to validate his talents by putting them in a broader context than a small town’s, as it was an international program, attracting students from China, France and from across the country, all of them older than Petkus.

He fared well in an end-of-session critique from his peers, which gave him confidence, “It felt good to hear, outside of a small population,” he notes.

The images in “Zenith” range from a self-portrait — the first Petkus has ever done, and completed as a directive of the class — which he situated on a page adjacent to a repeated block print. Another, “Bones Machine” shows a collage of actual skeleton bones reassembled to portray a machine which serves as legs of a sort, propelled by the wind. “I cut out each bone, numbered them all and them put them where I wanted them.”

Petkus worked for a long time on the final “Goatman” image; the fine lines he painstakingly drew on the horns “took forever but were necessary to give it shape.” A spiral on the creature’s forehead echoes one Petkus has placed on his own forehead, along with Maori-esque face tattoos in the self portrait. All in all, he notes, “We were encouraged to have some kind of a narrative; mine’s pretty loose!” 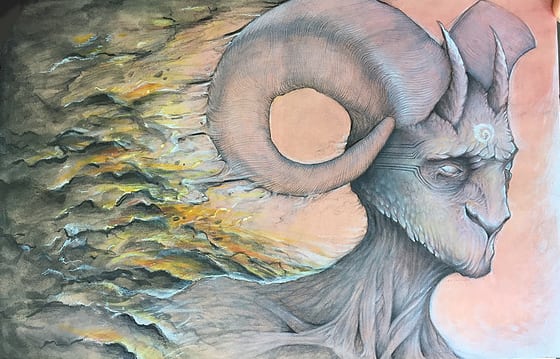 Petkus has always been prolific: “I draw so much I have suitcases filled with old drawings.” His subject matter, while not radically different from what it had been earlier, has progressed. “It’s always been crazy stuff out of my own head, but now it’s more rooted in real things because I’ve found that’s what makes a better picture: something people can recognize, “ he explains.

Citing film as his top ‘other art form’ inspiration, Petkus says seeing interesting ones “helps develop aesthetics you respond to, but most of it is just getting out and seeing things, so you can have a bank of images.  I like drawing things that I haven’t seen people draw before.  There’s no formula to what it is.” With an affinity to certain things in particular, deer skulls, snakes and other elements found in nature in particular, Petkus is certain that growing up in this area, in a house surrounded by woods, has given him the most inspiration: “Being outside, looking at the world has helped.” Nature isn’t his only inspiration, however.

He’s also very taken with the propaganda poster design of the first half of the 20th century.  In work called “Propaganda” not only has he created his own imagery, but also a new language, replete with original symbols.

Although Haldane is a small, generalist public school, Petkus feels that in many ways it is more beneficial to him than attending a visual arts specialist high school would be. “In some ways it helps, because it essentially makes people work on their own — it forces them to.  I haven’t been molded as heavily by people instructing me in specific ways.  There’s a period to develop you on your own that there wouldn’t be otherwise.”

He feels that as art is a required subject at Haldane, it’s tough to “have to cater to kids who are not naturally inclined to be artistic.  I think it might work better in school if they could identify those kids who are looking to do it as a profession, and make it more rigorous.” 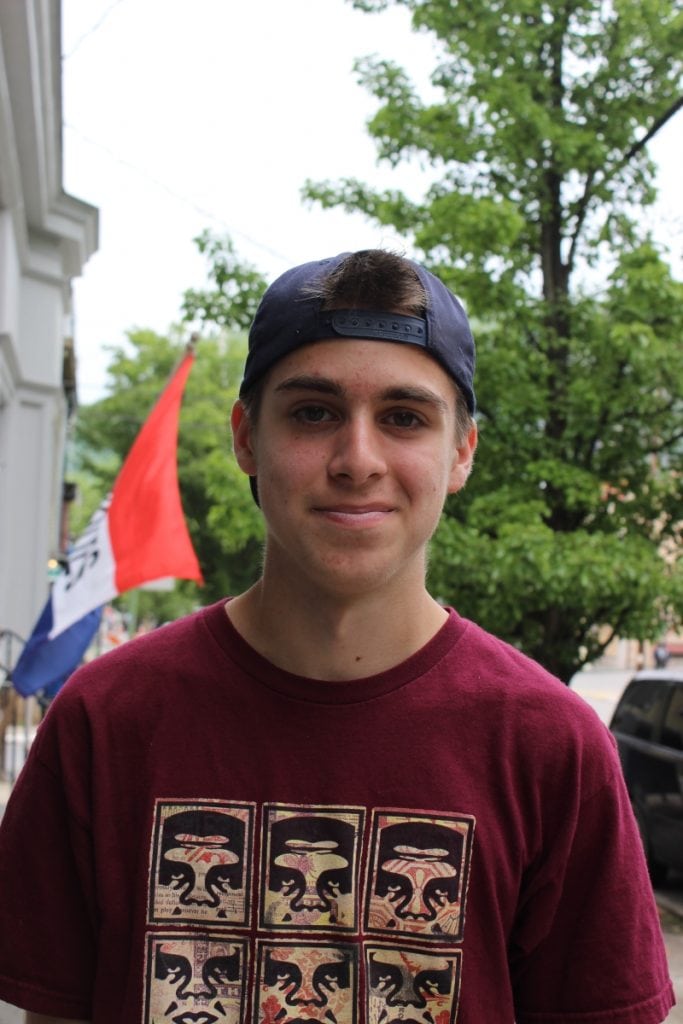 Jonas Petkus  (Photo by A. Rooney)

Although he has two years left of high school, Petkus is already setting his sights on the years beyond, and, shifting gears for college he does want to attend an arts-focused school.  Next year he intends to take a trip to the U.K., looking particularly at a couple of art schools in Glasgow and Edinburgh. “Life is short and you may as well be adventurous,” he says.

Before then, he is looking to expand the art he is making, moving into sculpture, among other things. “I want to up the scale I work in.  In the past my work has been pretty small because I really enjoy doing fine details, but I want to start thinking in different ways and working on a bigger scale.”

One bigger scale effort has been the long-in-the-making Foodtown mural, finally set to be displayed in a month or so.  Petkus and fellow Putnam Arts Council best-in-show winner (in 2015) Wylie Thornquist have been working on this for quite some time. The fantastical elements common to both artists will be on hand, or so it seems, from Petkus’ description of part of it as “a vulture rising out of the ashes in a surreal desert scene — an orange sky.”

Petkus doesn’t plan out his work in advance, because “even when there’s not a narrative in mind, a narrative happens.  I always have a loose plan, but it takes another turn as I follow what my hand does.” Asked if he considered what reactions to his work might be, factoring those in to what he creates, he stated, “This year mainly I’ve started to think about how other people see the work. But really, at the end of the day I just want people to think that it’s cool. There’s not necessarily a deeper meaning to it — I just want to create something people want to look at.”