In comedy you must throw, pass and know when to hold the ball to let your partner hold the light

Jennifer Simard is living the dream right now, but her feet are planted firmly in the reality which supports that dream. After over two decades spent as a working actress, Simard has been nominated for a Tony Award for best featured actress in a musical for her portrayal of a gambling-addicted nun, Sister Mary Downy, in Disaster! Topping off the double rewards of being both a critical and audience favorite, the Tony excitement was tempered by the earlier than anticipated closing of the show itself, the vicissitudes of show business in their full display.

Still, Simard, who began rehearsals for Disaster! as one of the then-lesser-known cast members, emerged as, well, if not quite the understudy who came out the star — she has four Drama Desk nominations, has sung on about 10 cast albums, and appeared on Broadway previously in Shrek the Musical, The Putnam County Spelling Bee and Sister Act! the Musical (apparently if there’s a show with either ‘the Musical’ or an exclamation point, or both, Simard’s in it) — the most talked about, particularly in a scene which defies its description of “a nun caressing a slot machine while singing the ’70s disco hit Never Can Say Goodbye.”

Putting her own touches on a characterization

Lest anyone think Simard, who lives in Cold Spring, is portraying this nun in a mean-spirited or ill-considered way, the opposite is true. “A nun is a stock role for a character actress, and I’ve enjoyed playing them before, but this nun is so different, so dark. It’s been fun to play such a great character on stage, adding layers to her. She is so many other things, and I came to believe that she became a nun because she thought it would cure her gambling addiction, which it didn’t.” Simard, who has been involved with Disaster! since its off-Broadway run in 2013, was able to shape her character, with the encouragement of the show’s creators, Seth Rudetsky and Jack Plotkin, whom she describes as “the best kinds of collaborators in that they were secure and open to new ideas. The allowed me to put some frosting on what was already a great, gooey cake. For instance, I kept adding moments where, from the most gentle of brushes, she kept falling down: great physical comedy bits.” 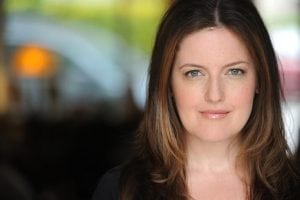 The interplay with her fellow comedic performers was a highlight of performing in Disaster! for Simard. “In comedy you must throw, pass and know when to hold the ball to let your partner hold the light. Selfishness is not good for anyone. One person wins, we all win. In this show, people had nothing to prove. They couldn’t have been happier for my success and that’s a lesson I hope to remember when I’m in that position.”

One of the best things about portraying Sister Mary for Simard was that she got an opportunity to originate a role in a new production, something which happens rarely. Asked what her dream roles might be, she was quick to respond with “roles that have yet to be written. I love new work.” Having a clear-eyed sense of self has served Simard well since her career began. After growing up in New Hampshire, she briefly attended The Boston Conservatory but left partway through because she was already getting plenty of professional work, embarking on a career path which, even at the outset, saw her performing in many revues and satirical pieces, putting her talents at impersonating a wide variety of ‘types’ to good use.

From a young age, Simard knew what she might be and, more specifically, what she probably wouldn’t be, in terms of casting. “Even in high school, when I watched Rear Window I never thought I’d be Grace Kelly, I knew I’d be Thelma Ritter,” she explains, continuing, “As an actor you can get into trouble with yourself — the competition is too tough, so illusions are no good. There are so many people as or more talented than you. That said, you don’t want others to limit your belief in yourself. Sometimes you have to convince others if it’s something you know you can do. The longer you have a relationship with casting directors, the better. Once in a blue moon you can break the mold and change opinions, but it’s rare. Because I’m in between a leading lady and a character actress — I’m attractive enough to play the leading lady but I’m unusual enough to look or sound like different types, it’s sometimes helped and other times not. “Sometimes you’re going to lose the role to someone who looks more the way the character is imagined. But breaking through to get to play a role you might not have been considered for is a great joy.” 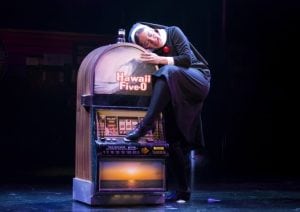 Always a limited-run engagement, Disaster!, though popular with the audiences which did come to see it, struggled to expand on that audience. Citing the location of the Nederlander Theater (it’s the southernmost of Broadway houses, on 41st Street, away from a lot of passing-by potential ticket-buying foot traffic), Simard calls it “always a difficulty alchemy as to what makes shows sell. The good thing is that one cause is that Broadway as a whole is thriving, and theaters are needed.” That’s ultimately good news for both Simard and her husband, who works as a stagehand. Fittingly, they first met during a production of I Love You, You’re Perfect, Now Change. “He has a bit more stability. His role as the primary provider in our home has helped me achieve my artistic goals,” Simard says.

A move to Cold Spring

The two moved to Cold Spring around a year and a half ago, after spending “10 happy years living in Washington Heights.” They were drawn to the area partially because of the ability to commute fairly easily into the city and also because West Point, from which one of Simard’s two brothers graduated, is a place of great sentiment for her family, an increasingly poignant one since her mother’s passing not long ago. “Having a touchstone to childhood roots is very appealing, and it’s probably the main reason we’re here.” After moving to the area, Simard was briefly a member of the Cold Spring Historic District Review Board, before having to resign because of her increasing work commitments. “I was happy to volunteer; we need to have a healthy appreciation of what’s here. The 19th-century infrastructure, things like having train tracks bisecting the village, is rare in America and should be valued and cherished. We also love and appreciate it for its beauty.”

Simard’s next job is in the “can’t talk about it yet” stage, but in the meantime, there is this time to savor. A groundswell campaign by her peers, including such Broadway notables as Audra MacDonald, to convince the Tony Awards producers to include Simard’s showstopper number in the June 12 telecast, is still underway, something that moves Simard deeply. “It’s been a shock; it really took off. The best part of this campaign has been having the love and respect of one’s peers — it makes me feel like weeping. In a more than 20-year career it’s feeling like your community is going ‘Hey, we love you for who you are; you are enough.’ I’ve hit some kind of jackpot just from this love. I’ve won something even greater.” In this heady ride, Simard is “trying to enjoy it all — it’ll be over in a blink.”