Help with identifying a fruit tree

There’s been a long running discussion in my house about a fruit tree in our front yard. My husband calls it an apple tree; I think it’s a crabapple. While the fruit looks like an apple, it’s smaller than most apples and that’s what I think of as a crabapple. Last summer, my husband and our one-year-old, who loves apples, decided to start eating the fruit from our tree and it wasn’t bad tasting. Free food in the yard!

There’s still a difference of opinion, though. I first turned to my tree identification materials but couldn’t find a definitive answer. As far as fruit goes, a common definition is that a crabapple is just a smaller version of an apple, less than two inches in diameter. To settle the subject, I turned to an apple expert, Josh Morgenthau, the owner of nearby Fishkill Farms where they grow 40 acres of apples and have become a popular tourist destination.

Apples are classified by their Latin name in the genus Malus, part of the Rosaceae family along with pear and quince. Morgenthau said, “Any species that are not Malus domestica are crabapples. The fruit is much smaller, about the size of a golf ball or marble. They are generally pretty inedible or not good for eating raw because they are high in acidity and low in sugar.” Crabapples are also Malus but they are considered to be the wild version of the tree, not the domesticated apple that is produced for food. 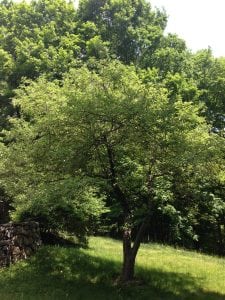 Crabapples are the wild cousin of the apples we grow for food. (Photo by P. Doan)

Morgenthau said, “There’s some confusion generally about the topic because there are a couple dozen species of apples in the world and only one species, Malus domestica, singlehandedly accounts for the majority of the apples that we eat.” He used the metaphor of dog breeds to describe all the hybrids. There are many different types of dogs and they come in all shapes and sizes as do apples.

Apples aren’t grown from seeds. If you planted the seed of a gala apple, for example, the tree wouldn’t produce a gala apple. It could be any kind of apple. Apple trees are grafted, instead, to ensure propagation of the cultivar. Scions from a tree are placed onto rootstocks. It’s a pretty interesting process that we’ve developed to maintain a steady supply of one of our most popular fruits.

Typically, trees can be identified by their foliage and bark, but my untrained eye can’t tell them apart. Morgenthau said, “I can probably get a sense from looking at the fruit and tree but couldn’t tell you how to do it or what to look for.” The fruit tree guides I explored didn’t have distinguishing information, either. Even a pear tree’s leaves look pretty similar to me. 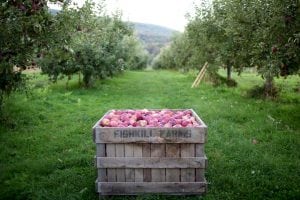 At Fishkill Farms, one of their most popular offerings is called the chestnut crabapple. Morgenthau said, “It complicates the distinction between Malus domestica and other species because some varieties of apple are known colloquially as crabapples because they are smaller — one to two inches in diameter.” These apples are sweet and good for eating, just not as big as a typical apple. That seems to be the one thing that all the crabapple definitions agreed on: smaller size.

Mainly, crabapple trees are used ornamentally in the landscape. Many varieties have lovely, fragrant flowers at this time of year and they have a nice shape. One grower’s website listed 40 different varieties of crabapple and most of the cultivars produce fruit, albeit small.

Ultimately, does it matter what my tree is? Morgenthau said, “If it tastes good, I would say no. Crabapples have a lot of tannins and can be astringent. If they are sweet and crispy and someone likes eating them, it doesn’t matter. I’d be inclined to guess that they are at least partly or totally Malus domestica.” Now that I’ve experienced the challenges of getting a toddler to eat, if she continues to enjoy the fruit from our tree this summer, she can call it whatever she likes and have as much as she wants.