“Something initially considered trash becomes, in the end, revered for its beauty”

As a professional photographer, Aliza Eliazarov works both on assignment and on series she generates herself. Sometimes one sparks the other, as is the case with her “Waste Not” collection of photographs, which are on exhibition at Fovea at Hudson Beach Glass from June 11 through July 3, with an opening reception from 5 to 9 p.m. on June 11. These images largely present discarded food not as it is often presented, i.e. in mounds left curbside or spilling out of trash cans, but instead, composed and lit in the manner of the 17th century Dutch masters, the reclaimed beauty of the thrown-out food making the statement so aptly applied to the series itself. 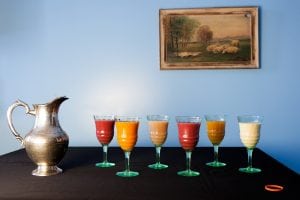 The genesis of “Waste Not” was an assignment, given to Eliazarov by a small newspaper, to follow a “Dumpster diver” on Earth Day 2011. Watching him extract salvageables from the waste outside a market near Columbia University, she continued to photograph as he laid them out for people to see. Eliazarov found the conversations between the people encountering the sidewalk food as interesting as the visuals. “What I observed was interesting and insightful, and confirmed the confusion people had about food waste.” Although planning to do more in this vein, she quickly realized that logistically, it was problematic. “You have to do it at night, with poor lighting, with dirty sidewalks, so that even a perfect apple doesn’t look it,” Eliazarov explains. Then another idea came to her: “At the same time I was looking at food in art, in paintings, particularly the Dutch masters’ still lifes. I realized that what was most important was to show the beauty of the food, to communicate that really beautiful food is being wasted. To photograph it in a way that it looks really beautiful elevates it into an object of art. Something initially considered trash becomes, in the end, revered for its beauty.

The 22 or so images on display at Fovea at Hudson Beach Glass also include other aspects of food rescue work, from apple orchard gleaners at work plucking fruit for food banks, to Dan Barber’s WastED, a pop-up restaurant reinvention within Greenwich Village’s Blue Hill restaurant which, over the course of three weeks in March 2015, devoted itself to the theme of food waste and re-use, with a dedicated menu using “overlooked byproducts of our food system, drawing ingredients from farmers, fishermen, distributors, processors, plant breeders, producers, restaurants and retailers.” Guest chefs created daily specials from these ingredients.

According to the most recent figures from the U.S. Department of Agriculture, food waste is estimated at between 30 percent to 40 percent of the food supply, including 31 percent food loss at the retail and consumer levels, corresponding to approximately 133 billion pounds and $161 billion of food. The USDA notes that the amount of waste “has far-reaching impacts on food security, resource conservation and climate change,” citing “wholesome food that could have helped feed families in need is sent to landfills. The land, water, labor and energy … used in producing, processing, transporting, preparing, storing, and disposing of discarded food are pulled away from uses that may have been more beneficial to society.” 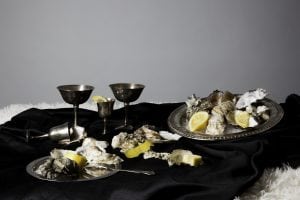 Eliazarov, who will give a talk about this work at the gallery at 7 p.m. during the opening reception, is Brooklyn-based, yet despite that urban base, farming, farmers and food have been her focus, subjects of creative portraiture, conceptual still lifes such as these, and documentary images. An earlier series, “Sustain” took her across the country, photographing nascent farmers — young college graduates starting CSAs and leasing plots of land or starting urban farms and rooftop farms. Formerly both a teacher and a park ranger (not at the same time), Eliazarov has lived in several National Parks including Glacier, Lake Mead and the Boston Harbor Islands.

The cover story photographer for Modern Farmer Magazine, Eliazarov has been featured in everything from the New Republic to Fortune, Edible to CNN.com. In 2016 her series on alpacas for Modern Farmer won an American Photography 32 Award as well as the Grand Prize in Rangefinder Magazine’s Best Friends Animal Photography Contest. Her work has been exhibited in the U.S and abroad, including The International Center of Photography, The Pingyao China Photo Festival — 25 Emerging Photographers in America, and a solo exhibition at the 92nd Street Y. She holds an advanced certificate in Photojournalism and Documentary Photography from the International Center of Photography, master’s degrees in Creative Arts in Education and Elementary Education from Lesley College, and an undergraduate degree in Natural Resource Management and Engineering from the University of Connecticut. 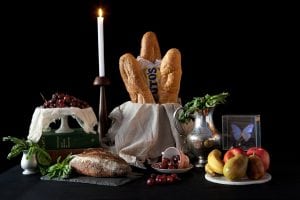 In considering the classical paintings which served as her inspiration, Eliazarov also realized that at the time they were created “there was never food waste; everything was used. So the object here is to show food rescue opportunities, not to show the waste,” she notes. “Organizations like City Harvest are rescuing foods for distribution, there’s the ‘ugly’ fruit and vegetable movement and there are other ways to divert food from the trash — even composting is a way of diverting waste away from landfills. The look of these images evolved from my need to tell this story.”

Fovea at Hudson Beach Glass is located on the second floor at 162 Main St., Beacon, and is open daily from 10 a.m. to 6 p.m. For more information, visit foveaeditions.org and alizaeliazarov.com.