Repertory theater companies have much to consider when putting together a season. For Davis McCallum, artistic director at the Hudson Valley Shakespeare Festival, each potential candidate is examined both on its own merits and also in relation to its stablemates in the theatrical barn.

“I try to pick a season with elements in conversation with each other, yet different enough for people of different tastes or interests. Many of our audience members want a joyful, exuberant comedy to combine with a picnic, so I try to pick a comedic tentpole. This year’s is As You Like It; we started with that. Then, this being the 400th anniversary of Shakespeare’s death, or of Shakespeare’s posthumous legacy, we wanted a doubling down of what we do best, so we departed from our previous two-plus-one (two productions of Shakespeare accompanied by one comedy by another author), and chose three Shakespeare masterpieces. Though it’s hard to predict what the country will be thinking, these three plays are about how we live together. Measure for Measure begins with the line, “Of government the properties to unfold / Would seem in me to affect speech and discourse.” Right there at the top of the play: What’s a just society? How do we live together? At the heart of Measure for Measure is a play about balance and imbalance. In a sense that relates to how a season is put together.” 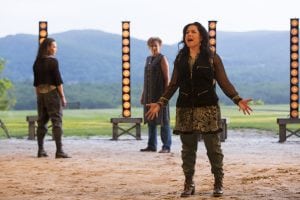 Macbeth, as performed by a three-woman cast, interpreting multiple roles completes the trio of Shakespearian plays, and this year’s ‘plus-one’ is a new work, So Please You, which is being created while the season is in progress by Zach Fine, who is building it around the talents of HVSF’s Conservatory Company, the young actors who study, learn and perform over a course of several months of training.

“After two years here it has become clear to me,” McCallum says, “that all the leading lights of our company are clowns, playing with spontaneity and deep connection with the audience — maybe that’s an essential part of HVSF style. I decided to hire Zach Fine, asking him to make a show for these young actors, very specific to them, the tent and the audience, and to make it appropriate for kids, with lots of playfulness.” Fine has devised a production upon the premise of ‘A Servant Named Dennis,’ that servant appearing very briefly in As You Like It, speaking his one line: “So please you, there is a wrestler at the door!” So Please You lets loose from there, with Dennis now a focal point, “an inverted idea, a little wormhole into a new world,” McCallum explains. The August performances of So Please You are free of charge (however one needs to reserve early, through the ticket order section of the website) and designed to “pack the tent with families, turning them on to theater.”

McCallum himself is directing Measure for Measure, his first time at the helm of this frequently designated “tricky” play. It’s in the ‘not quite a’ category of drama versus comedy and can be perceived as difficult for contemporary audiences to relate to some of the behavioral choices made by some of the key characters. Of course, conversely, these questions spur McCallum on. “Audiences have to decide, ‘Do you want us to make the leap? How does this relate to my life?’” he says, continuing, “Sometimes Shakespeare is universal: love, loss, family, politics, spirituality. You can’t believe he wrote 400 years ago. This play is really timely. It comes down to ‘How do we all get along?’ People have extreme points of view in the play and Shakespeare collides them all together.” 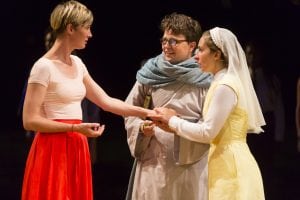 The short Measure for Measure program synopsis, with mentions of a hard-line deputy being put in charge of an unlawful state, with harsh penalties suddenly directed at what had been previously accepted sexual mores, morally compromised behavior by those in power, together with the more usual substitutions, disguises, twists and revelations doesn’t completely convey all the goings-on, plot-wise and, more importantly, ethically. There are some very House of Cards moments afoot, and the usual coterie of lobbyists — working hard on their own behalf and on behalf of others, sometimes for goals not immediately fathomable. McCallum describes the fourth act as “almost Coen brothers — a freight train runs into a brick wall, and then a huge and truthful thing happens … It all builds to an amazing moment. It’s all about a search for solution. We have to live where we are, not where we wish we were.” McCallum also finds it interesting that this was Shakespeare’s last “comedy” — “he didn’t write another, and maybe he felt that the form of Elizabethan comedy could no longer be supported.”

The community production of Our Town, commemorating HVSF’s 30 years in the Hudson Valley, ends the season over Labor Day weekend. See related Highlands Current stories. As described by McCallum, “It has been our most ambitious project, in terms of scale and just so much that we haven’t done before, such are never reaching out to some of the communities that are now involved. We’ve all found it very inspiring to see how fully embraced it has been; I think we’re on to something — a need by people to be a part of something big and meaningful. At the beginning of each season we have a big company meeting under the tent. We just gather and look and consider what we’re trying to create. This year the circle was bigger than ever before.” 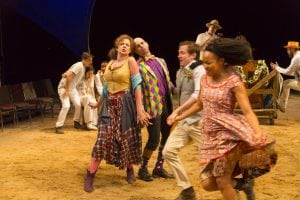 (Left to right) Nancy Williamson, Mark Bedard, Shawn Fagan and Antoinette Robinson in ”As You Like It”  (Photo by T. Charles Erickson)

During the initial period of rehearsal with any of Shakespeare’s plays, McCallum says he has the actors work on language first. “Characters and ideas come from that. Lately we’ve be reading the play together, not in the characters they’ve been cast in, but collectively hearing the play. It always brings up questions. The point of rehearsal is a group of people coming to a collective idea made from all the ideas. Our process is about letting go of the idea we had going in. Let us exist in a world where we can put the comedy and drama together.”

For more information and to purchase tickets for the season, which has begun and runs through Labor Day weekend, visit hvshakespeare.org.