Theo Henderson and Abbey Stowell competed in Syracuse on June 10 and 11 at the state public high school track and field championships. 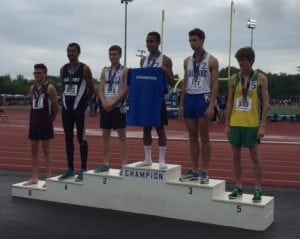 Theo Henderson, second from right, finished third in the Division 2 steeplechase at the state track and field championships in Syracuse on June 11 (photo provided)

Henderson, a senior, competed in the 3000-meter steeplechase and finished in 9:30.30, beating his own school record by 11 seconds. He finished first in the unseeded section, third in Division 2 and 11th in the state. He also qualified to compete in national competition. 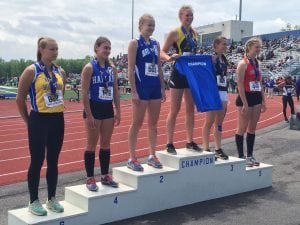 Abbey Stowell, second from left, medaled at the state track and field Championships in Syracuse on June 11. (photo provided)

Stowell, a sophomore, finished with 2,714 points in the pentathlon, which placed her fourth in Division 2 and 14th in the state. She also broke her own school record.

Coach AJ McConville said both athletes had done “what Haldane track and field does best — peak at the right time and show up and shine on the big stage. Overall, it was great to have our Haldane athletes compete well and showcase the hard work the whole team puts in the entire indoor and outdoor season. And I can’t thank the senior class we’ve had this year enough for their hard work and leadership over the last four years. We’ve had an unbelievable group that’s been an honor to be a part of and help coach them.” 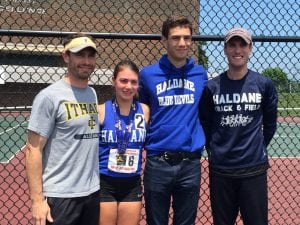