Back this week is The Current’s “walking the ward” series on Beacon. One by one, we’re touring the wards with each of the six members of the Beacon City Council. There’s no agenda; instead, the series is designed to familiarize readers with what’s happening in Beacon by speaking with the elected officials who represent their neighborhoods.

This week we spoke with Pam Wetherbee, who represents Ward 3.

In the 30 years that Pam Wetherbee has lived in Beacon, the Ward 3 councilperson has seen tremendous change.

Like many who have come to the city, she and her family settled in Beacon for its price and location. Only 90 minutes by train or car from Manhattan, the city is nestled right at the nexus of affordability and accessibility.

“Not many people wanted to live in Beacon at that time,” Wetherbee recalled during a morning walk along Mountain Road. “You had to be more conscious of your surroundings. Now it’s more comfortable and more vibrant. I’ve seen lots of changes throughout those years — all for the better.”

Wetherbee, who was elected to her second two-year term on the City Council in November, credits the Main Street investments of Ron and Ronnie Sauers and the 2003 opening of Dia:Beacon as critical points in the city’s turnaround.

“People with a vision who were willing to invest in Beacon really made the changes,” she says. 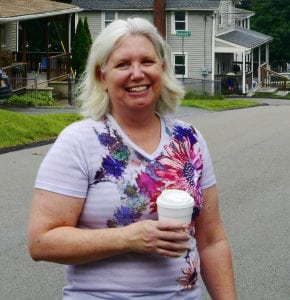 The ward she represents roughly encompasses East Main Street and the northeast quadrant of Beacon — a more quiet section of the city not necessarily on weekend travelers’ radars.

“Other than the [occasional wayward] hiker, they do have a lot of peace up here,” Wetherbee said. “But they do, in some ways, have more issues than others.”

Water pressure is weak along Mountain Road, she says, which ranges from an inconvenience for the residents here (many homes use water pumps to boost their pressure) to a potential danger in the event of an emergency.

“If there was a fire,” she said, standing near the end of Mountain Road, looking back toward Pocket Road, “they actually have to put a truck [at Pocket Road] and pump water to put out any fires up here.”

At one point, the city’s capital construction plan included the installation of water pipes underneath Mountain Road, in addition to some needed upgrades on the driving surface. Wetherbee says the project somehow disappeared from the list but is still critically important: “To me that’s a huge safety issue for the residents here.”

A blend of new and old

A chunk of the people in Ward 3 have lived in Beacon for many generations. So, given the residents she represents, is there a divide between “old” Beacon and those folks newer to the city, or is that a myth?

“I’ve been in Beacon for 30 years but I don’t consider myself a Beaconite,” Wetherbee says, laughing. “I don’t know how far back you have to go to get that. But you do get that feeling, and I have heard from people, that they’re not happy with the way that Beacon’s going.

The revitalization of Main — again with credit to the Sauers for kickstarting it — was a major factor in making Wetherbee feel truly at home in Beacon.

“Walking Main Street got me to really love Main Street,” she says now. “If you drive through it and just stop at the stores that you like, I don’t think you appreciate it as much as walking it. And not only do you have the stores to look at. you have amazing history to look at. If you take your time and look at the architecture, you’d be amazed.”

Now she encourages everyone she knows to buy local, eat local and drink local. Whatever one needs, there’s a good chance they can get in without going far.

As for the gap between new and old Beacon, what can city officials — Wetherbee included — do to bridge that divide?

“I feel that we’re doing everything we can do,” she says. “Everybody listens to what the residents are saying. I feel that Beacon is very open to new ideas. Look at the minds that got the Wee Play toddler park together. Or the dog park — the vision there.”

The City Council “is open to people doing different things,” she said. “If you have a vision, whether you’re new or old Beacon, get some momentum and get things going.”