The Desmond-Fish Library’s reading group will celebrate the bicentennials of two classic English novels with a discussion of Jane Austen’s 1816 novel Emma on June 30 and the original 1818 edition of Mary Shelley’s Frankenstein on July 28. All are welcome to join the conversations, which start at 6:30 p.m.

Emma’s original title page named Austen only indirectly as “the author of Pride and Prejudice.” Her identity was by then a well-known secret; Austen’s fans included the Prince Regent (later George IV) to whom Austen dedicated Emma after one of his agents hinted that he would appreciate the honor. 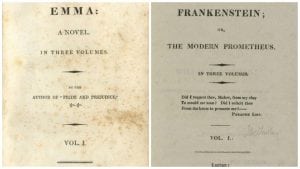 The title pages of the first editions of Emma (1816) and Frankenstein (1818). Both were published over multiple volumes.

Emma’s powerful imagination and presumed knowledge find strange parallels in the character of Victor Frankenstein, who came to life in 1816 from the mind of 19-year-old Mary Shelley. As the legend goes, Shelley was summering near Geneva with her husband, Percy, and Lord Byron. The inclement weather forced the group to stay inside where they read tales of the supernatural and challenged each other to write one. Her story was published anonymously in 1818 and quickly became a sensation. (Shelley revised the novel in 1831.)

The conversations on these two novels will be facilitated by Mary Anne Myers of Nelsonville, who holds a doctorate in English literature with a focus on British Romanticism. She has recently re-read both books with classes at Fordham University and Taconic Correctional Facility.

Copies of both books are available to borrow at the circulation desk at the library, which is located at the corner of routes 9D and 403 in Garrison. For more information, call 845-424-3020.