Visitors and residents alike are drawn to many of the same Hudson Highlands kind of things: natural beauty, colonial history and agricultural bounty. With villages and towns in the region showcasing these assets, farms and breweries see the value in welcoming the public to view their operations now that a tourism infrastructure has emerged.

Hudson Valley Food Tours (HVFT), a year-old company based in Rhinebeck, has noticed and already expanded its Culinary Crawls tasting tours into other parts of Dutchess and surrounding counties. In its words: “We think that the best way to discover a town or region, and have the richest possible encounter with it, is to do a behind-the-scenes culinary tour, as you learn about its culture and history and engage with the restaurateurs, artisans and farmers who are eager to share what they do and why.” These tours, which sometimes tie together food taste with art gallery visits, are now being offered in Beacon, Hudson and Poughkeepsie as well.

HVFT founder Jennifer Brizzi, a food writer and cooking teacher — Poughkeepsie-born and a Rhinebeck resident for the past 20 years — sensed a growing interest in culinary tourism, and  spent the better part of a year putting together her first program. At first she just focused on Rhinebeck, which operated successfully last year. This entailed going out and getting to know the farmers and restaurateurs she’d be bringing tour groups to. 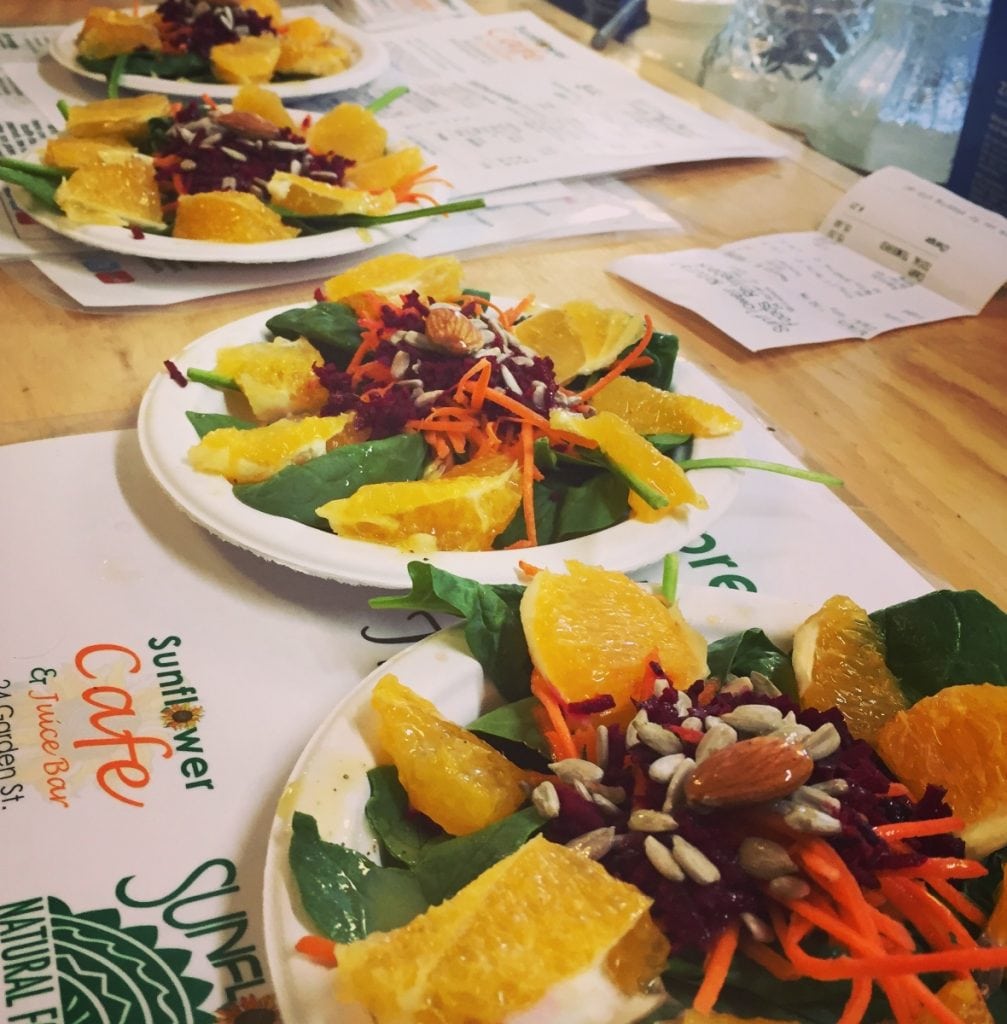 A refreshing salad sample on a Culinary Crawl. (Photo by Jennifer Brizzi)

Usually from two to four hours in length, with nothing more required than an empty stomach and the ability to gently stroll, each tour highlights a mix of restaurants, growers and others connected with the local food movement, all representative of the particular area being visited. There’s always tasting involved, and a sizeable portion of local history and lore disseminated, with the aim of giving the food a context in terms of the character of the area.

For instance, the Rhinebeck tour, offered every Sunday through October, and guided by Culinary Institute of America graduate Pete Ramos, an award-winning chef and food service manager, begins in the farmers’ market there, where the first hour is spent visiting six or seven booths and hearing from the proprietors, who include a charcuterie provider as well as a blackcurrant juice maker. The tour then meanders through 30 locales: eateries, bakeries, wine shops and candy and chocolate stores. Your tour guide will help you touch down at the best of them, and get to know some of the chefs, owners and staff, who have stories to tell and will entice you with their tastiest treats … bites of culture, history and Rhinebeck’s best flavors, according to HVFT notes. 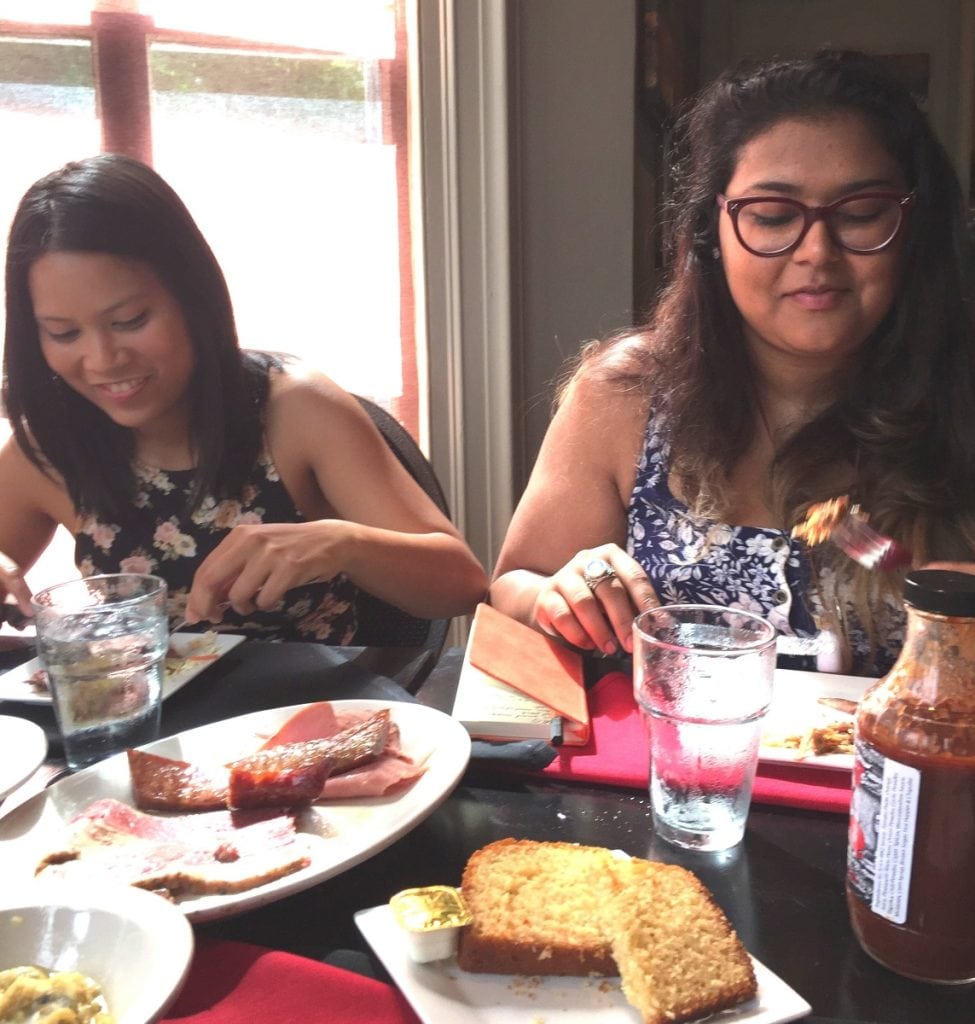 Other stops include Pure Mountain Olive Oils and Vinegars with specialties in infused oils, local beer, cider sampling at Grand Cru Beer and Cheese Market, and local meats house-seasoned and smoked at Smoky Rock BBQ, along with the hand-dipped chocolates at Krause’s Chocolates.

Brizzi calls her new Beacon tour, “really fun — it’s interesting and full of unusual experiences, particularly seeing people’s vision.” The tours visit the Dr. Who-themed Pandorica and Zora Dora’s paleteria along with several of Kamel Jamal’s establishments, a tasting at Artisan Wines, some Ella’s Bellas gluten-free goodies and the healthy sodas at More Good. “There’s a lot to pack in,” Brizzi says, adding mentions of “yarn bombs, murals and of course lots of history and lore.”

The Poughkeepsie tour, which is a bit longer, at four hours, has a large art component, along with the food. It is a little more strenuous, owing to the hills. A visit is made to multi-media artist Franc Palaia’s studio (he works as a painter, photographer, muralist and sculptor, among other things) as well as to such urban art sites as the huge murals relating to the history of journalism in the foyer and stairway areas of the Poughkeepsie Journal building, and the upstairs murals at the post office. The tour then continues on to a variety of food establishments along Main Street, replete with tastings. “This tour is designed to show Poughkeepsie’s potential and make people aware of how amazing it is,” explains Brizzi. 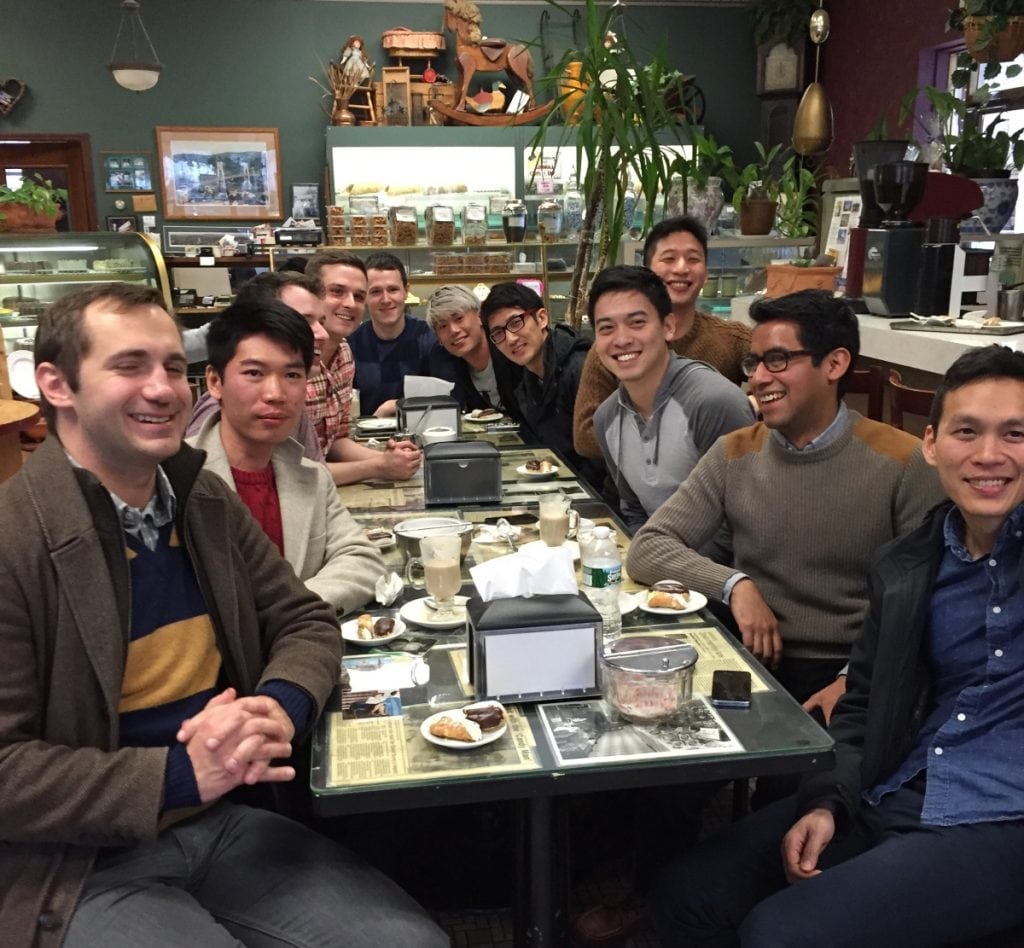 The Hudson tour is more upscale. “We talk about and taste a lot of creative food there — it’s become such a destination for city people now, many with money,” Brizzi says. A healthy dose of history is included during the amble up and down Warren Street. There is also an occasional five-hour mini-bus tour offered to the Rondout Valley, visiting out-of-the-way farms and breweries and — why not? — a “delicious”  pierogi maker, according to Brizzi. It ends at the Rail Trail Café, which Brizzi describes as “a teeny tiny food truck located in the middle of the woods.” A Millerton area bus tour visits lots of artists’ studios and includes a big local-foods gourmet lunch. Private, custom-designed tours for individuals, groups and corporate groups are also available.

This year is a tester season for the Hudson, Beacon and Poughkeepsie tours. If all goes well, HVFT hopes to keep expanding, and Cold Spring is on the wish list, along with New Paltz, Saugerties and beyond. “I’m discovering more and more as I go along and it’s all really exciting,” Brizzi says.

Most tours have a maximum of 12 participants and run rain or shine, except in severe weather. Pre-registration is usually required because the food establishments need to allocate the right amount of provisions in advance (one can always make contact on the day, just in case a last-minute joining up is possible). Each tour description notes the fitness level involved (usually minimal) and the cost. There are discounts available for seniors over 62, military personnel and culinary students. All tastings are included.

Visit hudsonvalleyfoodtours.com for full details, costs, and to make reservations.