When Lee Kyriacou, one of the City’s Council’s two at-large representatives, was first considering a move to Beacon, his real-estate agent told him point-blank, “You don’t want to be there.”

The year was 1992 and most professionals in Dutchess County, including many who worked for IBM, didn’t live in Beacon. A good part of Main Street was deserted.

“The city’s comprehensive plan allowed for 10-story buildings on either end of Main because they didn’t think anything would come there again” otherwise, Kyriacou recalled, walking along the Beacon waterfront this week. “There were way too many empty buildings.” 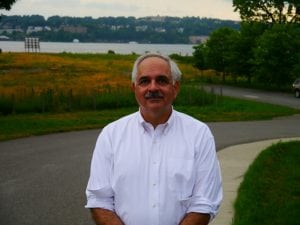 But Kyriacou and his wife gave Beacon a chance and witnessed, and participated in, a reinvention of the city that few expected.

Kyriacou joined the City Council a year after arriving and, with his colleagues there, helped rethink Beacon’s zoning laws while updating the city’s vision for its waterfront. Now in his eighth term, Kyriacou points to those initiatives as catalysts for Beacon’s turnaround.

Lessons learned in the early 1990s have stuck with him, too.

“Your zoning tells you what you’re going to get, and our zoning was a disaster,” he says. At the time, two-thirds of the city’s housing stock, by his estimate, was zoned to allow for the conversion of single-family homes to multi-family units. Based on that, the house where Kyriacou still lives could have been divided into 14 units.

As a result, families who might consider Beacon were consistently outbid by developers eager to convert homes into multi-unit rentals.

Over the next few years, the council amended the zoning codes. Ground-floor apartments on Main Street — a vivid indicator of the local economy’s poor health — were eliminated, as well.

Slowly, Kyriacou says, the community readied itself to receive newcomers. The city was still not as aesthetically pleasing as it could be, he said, but more families began buying homes.

At the same time, the second step toward change, Kyriacou said, was taking place at the waterfront. The Nabisco factory near Denning’s Point, a relic of the city’s industrial past, had closed. Other uses, many of them also industrial, were considered for the site. A fish factory, Kyriacou says, almost came in before some good luck and key connections led to Dia:Beacon taking the property.

The museum opened in 2003 and changed the character of the waterfront immediately. What had been exclusively industrial was now a major drawing point.

“That was the huge boon for the community,” he said. “It certainly made Beacon an attraction for a whole generation of young families.”

With those two changes in place — zoning reined in and the waterfront evolving — the city was ripe for a revision of its comprehensive plan. Drafted in the 1970s, the plan had been modified in bits and pieces in the decades that followed. By the early 2000s, however, the changes in Beacon were evident.

By then enough of the community could see the new direction, Kyriacou says. “The comprehensive plan process, which was completed in 2007, really reflected the turnover of the community. Newcomers were actively involved.”

Beacon Mayor Randy Casale formed another committee earlier this year to consider additional revisions to the document as the city enters yet another new era of growth.

Recalling his statement that zoning “tells you what you’re going to get,” Kyriacou says the City Council is rightly planning for a vibrant future.

On the flip side, though, he’s followed the debate over rezoning portions of the city’s linkage zone closely, and cautioned that the city not overbuild: “You need to pick your density where it belongs.”