There’s a theme in there being no theme; it’s just a weird combination of stuff that goes together

The merchandise at Beacon’s Dream in Plastic (DIP) does conjure up a hallucination of sorts. A wander around the Beacon store, in business there since the summer of 2009, becomes a kind of fugue mixing the nutty, the colorful, the instant “I didn’t know I wanted it but now I really want it” and, more rarely, “this could actually be useful.” Above all, it’s a fun browse. Or, as DIPs owner, Jenny Zuko puts it: “I kind of feel it’s what the inside of my brain looks like!”

An amble around just the left half of the two-room space reveals such disparate items as socks with astronauts and mermaids, a pretend accordion, café au lait bowls, temporary tattoos, same-sex wedding cake toppers, cards and prints, vintage cameras, a tote bag featuring a hula dancer and a ukulele and a wall full of ‘Adopt-a-Robot’s — painted cubes, each with its own description, one reading “Prefers chocolate to mayonnaise, loves a deal that literally costs an arm and a leg, wants to be a fulltime old-timer.” Much more awaits, on the other side and in the back room, which doubles as an art gallery, with rotating monthly exhibits, featuring very affordable art which gels with the overall zen of the store. 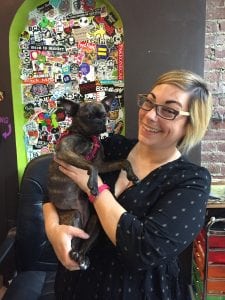 Dream In Plastic’s owner, Jenny Zuko, with her partner in Plastic, Hazel.  (Photo by A. Rooney)

DIP began as a website, the creation of Zuko and a Brooklyn-living friend, based on the concept of “designer rental toys” as she puts it. Zuko was working in web design and had no retail/wholesale experience, just an enthusiasm for certain types of products. “I was a web developer. I went into this with a designer’s eye and an “I want to find the most perfect gift” attitude … The business plan came later, after all, ‘What do you do as a business plan when you don’t know anything about how to do it?’” Zuko notes with a grin.

Seven years ago, upon Zuko’s move to Beacon, the online business morphed into a retail store, which she alone runs. There is still a website, which has about 90 percent of the physical store’s stock on it, but the majority of web sales are from customers who have come in, seen things they wanted but don’t feel like lugging home, who decide to purchase them later online and have them shipped. “The retail site was originally the main focus but it no longer is, although it is still definitely part of DIP,” Zuko notes. 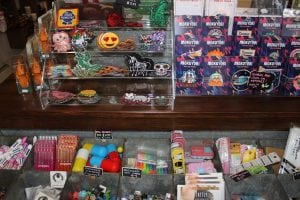 Lots of little ”Made In Japan” items fill the shelves at Dream in Plastic. (Photo by A. Rooney)

The store’s stock is ever-changing, and the product list keeps growing, as Zuko works with “thousands of suppliers, from individuals to large companies. “All I do is shop … I like to think it evolved with me, as I’ve become more adult, it has also become more adult. Now we have a lot more housewares, for example.” Indeed, amidst the large orange bunny, Japanese toys and back room full of “Squishables” round plush toys, one can also find bowls and colanders, notebooks and other stationery, and a whole section devoted to funky kids’ party stuff, with confetti balloons and mini piñatas, as well as a good selection of sippy cups for toddlers. “There’s a theme in there being no theme; it’s just a weird combination of stuff that goes together” is how Zuko explains it all.

Over time, Zuko has been able to shift from running DIP on a part-time basis while maintaining her job working in the city as a web designer to what is now fulltime, something she is very appreciative of. Aiding and abetting her in the store is her half pug/half Boston Terrier, Hazel. Last January Zuko had a wall torn down at the back of the front room, and changed what had been her office into more retail space, which doubles as a gallery. The aesthetic of the gallery is “accessible art”, something reflected in the prices as well as the style. As Zuko notes, “You won’t see a $10,000 painting here. Everyone wants to hang art on the wall, but many people can’t afford to. Our last show sold about 75 percent of the displayed work. Our commission is super low, I do it for my love of art.” Receptions are held on the Second Saturday of every month from 6 to 9 p.m. This month’s exhibit is “Through Space and Time: intergalactic works on canvas” by Sean Donovan. 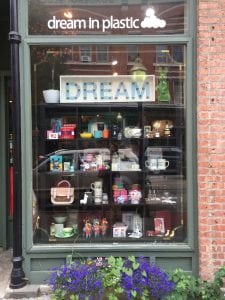 The storefront window at Dream in Plastic offers a sneak peak of what’s inside. (Photo by A. Rooney)

So, what’s up for fall at DIP? Zuko isn’t totally sure, aside from saying the party section and the bath and body products will both continue to grow. “We’re also bringing in some Beacon-related things, exclusive to us. A lot more Japanese stuff — I’m obsessed with it. We test the waters with a lot of things, see what the response it like and then order more if it’s good. Overall we’re trying to stock things you can’t walk into a department store and find.”

Dream in Plastic is located at 177 Main St., Beacon and is open Thursdays through Saturdays from 11 a.m. to 7 p.m., and on Sundays and Mondays from 11 a.m. to 5 p.m. Visit dreaminplastic.com and all of the major social media sites for more information.