Peggy Ross in the thick of things as city grows

Mayor Randy Casale appointed Ross in March as co-chair of a 14-person committee tasked with drafting Beacon’s next comprehensive plan. More than any other document or council decision, the plan guides development and land use in Beacon.

It is typically revised every 10 years or so and this time around coincides with the city entering what is by virtually all accounts a critically important era of growth. The plan was last updated in 2007. 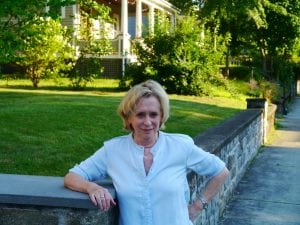 Ross says that she’s hoping for significant community involvement as the committee begins crafting a blueprint for Beacon. The first public meeting will be held on Sept. 22.

“This will be a statement of community vision and an expression of our goals,” said Ross. “We’re becoming a city. Whatever we put in there has to accommodate increased density” as well as consider public transportation “and all the other enhancements of the city.”

It was a Ward 1 concern that drew Ross to planning issues, and to the City Council, where she is now in her second term.

In 2009, shortly after moving to Beacon, she became involved with Beacon Deserves Better, a group that opposed the creation of a “transit-oriented development” along the city’s riverfront, which is split between Wards 1 and 2. Pushed by the Metropolitan Transportation Authority, the project was, in Ross’s view, a “gigantic parking structure with retail” that she says would have competed with — rather than complemented — Main Street.

“There’s a phrase in planning. They say ‘be a place, not a node,’ and we were a node on their regional plan,” she said. “There’s no reason for us to be that, because everyone had a sense of [Beacon’s] potential.”

Shortly thereafter, then-newly elected Mayor Casale asked Ross to chair the committee for rezoning the Hudson River-to-Main Street linkage zone. In 2013, she was elected to the City Council.

Part of the linkage zone lies within Ward 1, and it’s been in the news as the city grapples with how to balance the need for increased development with historic, small-town neighborhood charm.

Looking forward, Ross said she understands the importance of the committee’s job as it considers the comprehensive plan. “This will provide guidance for the public agencies; it’s what we refer to,” she said. “It defends our land use and gives us direction.”

So, for anyone concerned (or excited) about what Beacon might look like in 10 years, this is your chance. Mark Sept. 22 on your calendar.

“I’m very concerned about the built environment and what it looks like,” Ross says. “We’re in a different economic climate than in 2007. Demands are different. This plan should prescribe where the growth is going to occur.”