“It’s a book about the way young people with progressive expectations function in states in which those expectations are frustrated.”

Living an itinerant lifestyle is part of the deal if you’re in a successful band. Touring, whether it’s in a regional or world circuit, and playing live concerts, is still — despite the digital exchange of music around the planet — both a goal and a yoke of kinds. Franz Nicolay, a member of the popular band The Hold Steady, had seen parts of the world multiple times over, traveling frequently to Germany, the U.K. and all parts of the U.S. Despite the band’s success, the life he was leading, simply getting from one place to another rather than the enriching side of travel, was getting to him. His other interests were sidelined.

A “Slav-o-phile” dating back to a Russian literature class in high school, his fascination with that region and beyond was enhanced during college, through the study of the music from the Balkans. “That part of the world was at the top of my list,” he notes. Various descriptions of The Hold Steady, which began as a Brooklyn musicians’ collective, incorporate such labels as punk, soul, klezmer, jazz, tango, and their influences are described as extending from the Weimar Republic to Leni, Philip K. Dick and cheap red wine, so there’s certainly a connecting thread between Nicolay’s interests and music. 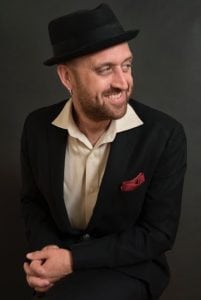 Nicolay jumped ship and boarded a train — many, actually — in 2009, departing from the successful band and striking out on his own, not just professionally, but in every way. Setting off for parts of the world he hadn’t seen, he traveled with not much more than a guitar, banjo and accordion, spending five years, journeying, sometimes alone, sometimes with his wife, writing about what he encountered while doing so, mixing the journey and the pen in the literary traditions of his predecessors, from Rebecca West to Paul Theroux. “I wanted to visit the countries I’d spent years imagining, to put myself in the paths of past traveloguers and literary portraiteers and to compare their impressions, sometimes a century or more old, to mine in the present day,” Nicolay writes in his introduction.

The book it yielded, The Humorless Ladies of Border Control, has just been released by The New Press, and Beacon’s Binnacle Books is hosting the official release party on Saturday, Aug. 13 at 7 p.m., with a reading, signing, short performance, all accompanied by free wine. The public is welcome.

The underpinnings of the trips — which eventually took him to Russia, Ukraine, Bulgaria, Poland, Hungary, parts of the former Yugoslavia, the Balkan peninsula and Romania — were the club dates Nicolay was able to book along the way, using concerts to facilitate his route. “There’s an archipelago of kids connecting on the internet, and I was plugged into that world because of the bands I’ve played with. All these kids are exposed to the music but for the most part bands don’t go there, so there’s a certain excitement which means you can draw audiences just by showing up.” Press notes describe the places Nicolay performed as the “anarcho-leftist squats and DIY spaces of the punk rock diaspora.” Asked to elucidate what that means, for those not part of it, Nicolay says simply, “The scene is young people putting on noisy acts where they can.” 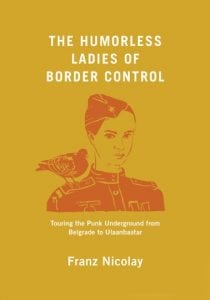 Nicolay describes a crossfading of his interests in the period before he began his independent travels, with writing usurping making music. Combining the two was a way of adjusting the knobs, perhaps in a less than radical way for someone whose band was noted for “lyrically dense storytelling, narrative-based songs … often with recurring characters” (David Dye, NPR Music). Nicolay emphasizes that “for the most part this is not a book about music, it’s a book about the way young people with progressive expectations function in states in which those expectations are frustrated. Young people’s access to the internet elevates certain hopes. Punk is a way of carving out a way of coping. There are certain similarities to the original punk movement, particularly in Russia and, to an extent, in Bulgaria. There are fascist skinhead gangs along with left-wing punks. There are great contrasts between places — in Russia, the young punks were cynical, passive, feeling there’s nothing they can do to change things, whereas Ukranians were really feeling their strength, directed at things they can be working toward.”

In the book’s introduction, Nicolay explains it further: “On one hand, it is a backward-looking story, in which a surprising number of aging rebels, from scenes and bands that had defined themselves in opposition to authoritarian communism in the 1970s and 1980s, took an unexpected (or perhaps not, like grouchy old American punks who discover a misanthropic taste for guns and libertarianism) turn toward reactionary nationalism in the 1990s and 2000s. On the other hand, it is a forward-looking series of portraits, in their own words, of a young and internet-enabled generation with a utopian idea of American punk, DIY, progressive politics, and communitarian ethics. This idea of punk provides this generation with the moral fortitude to carve out a fragile, tenuous, but extensive and resilient autonomous zone for themselves …”

Like most great journeys, this one was marred by the unexpected, when tensions with Russia escalated rapidly in Ukraine during Nicolay’s time there. He notes, “It turned different in Ukraine. The other places were a reckoning with the past. A kid in Kiev said to me ‘It’s like reading a book of history and I don’t know how it will end yet.’ ” In his introduction, Nicolay discusses topicality and why, despite the ever-increasing swift discarding of “news”, detailing it is important: “The story of history unfolds fast enough that the telling of it cannot hope to keep pace, and parts of this book may read like old newspapers by the time of its publication — but there is a value in capturing how people felt in the transient moment.”

As for the book’s title, despite the imagery it instantly evokes, Nicolay explains, “There’s a broader explanation. There were so many border crossings, but the people I’m describing represent a borderless community. I’m not making any claims for this particular community. But you hear pundits describing that alternate civil societies are needed to counteract what is going on. These kids have airlifted an ideology from the generation of punk rockers in the ‘80s. But that ideology doesn’t exist here any more, so they’re enacting more of a pure version of American ideals.”