There’s not much that beats finding a waterfall with spillwater wading pools, deep in the forest. Arcing over them you might see small rainbows, bent birches or a hand-hewn bridge. They feel primitive, and, largely, they are. The gneiss and granite that lie beneath Hudson Highlands waterfalls “is sometimes upwards of a billion years old,” says Aaron Donato, Outdoor Educator at Cold Spring’s Taconic Outdoor Education Center (TOEC). 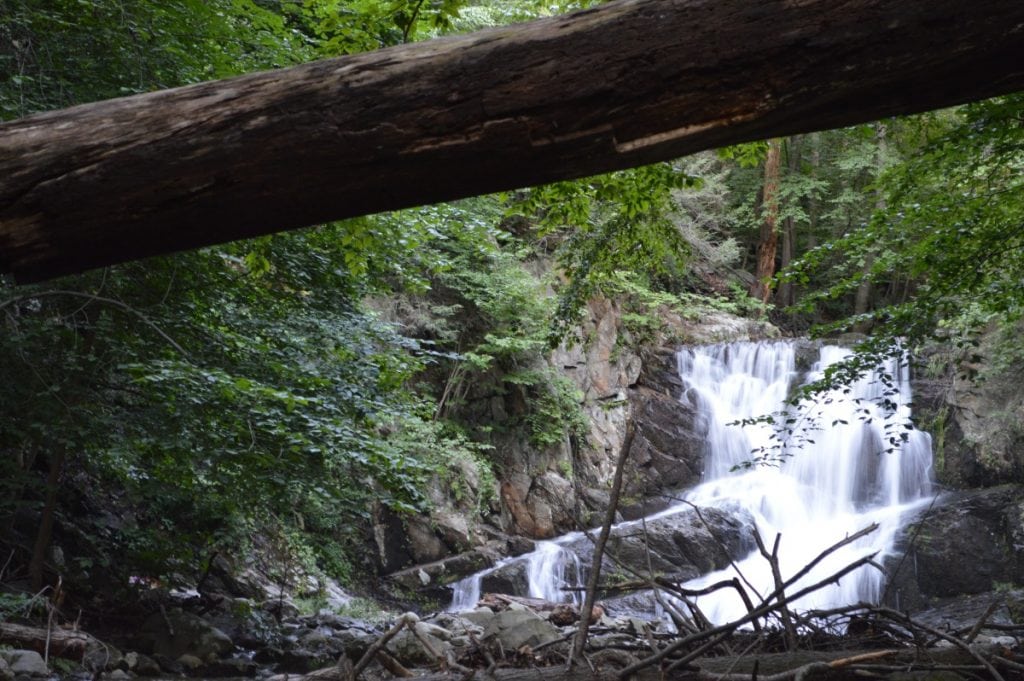 The waters of Indian Brook Falls, between Cold Spring and Garrison, feed into the Hudson River at the Audubon bird conservation area a few hundred feet downriver.

There are hundreds of cascades and cataracts across New York, he adds, and they differ in appearance from east to west. The Highlands were “formed during the Grenville Orogeny, the geological event responsible for the creation of much of the Appalachian Mountains.”

Particular to the Mid-Hudson Valley region is the shadowy “clove” — Dutch for “cleft” or a narrow rock gorge — that draws snow and water down highland slopes to form falls.

Today, there are state and regional parks that provide paths, viewing promenades and bridges for many of New York’s rock canyons and waterfalls. For the wilderness falls that appeal to climbers and hikers, the ideal mode is to “view them from afar,” says Donato. But being human, we’ll try to get close anyway, thus our safety tips, below. 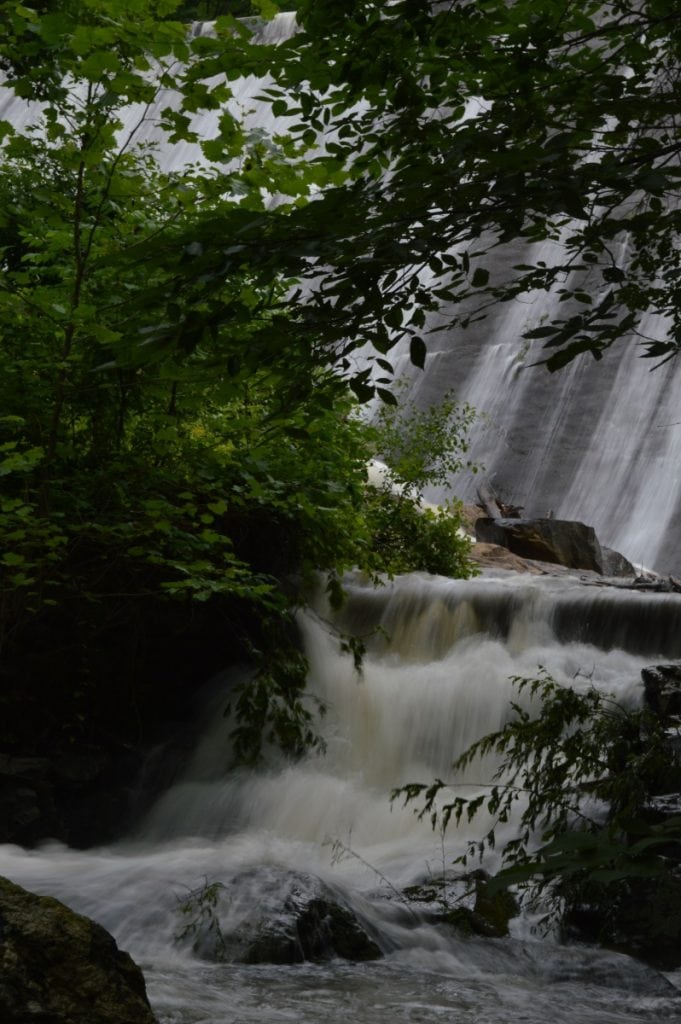 Curtain falls hurtle off the Melzingah Dam into Gordon’s Brook at Dutchess Junction, near the Beacon/Fishkill border.

And as tempting as it is, Donato recommends that you don’t swim unless it’s permitted, “as many waterfalls have a strong undertow and recirculation pools hidden underneath the falls, with various snags that can cause drowning.”

In other words, the most beautiful conditions under which to approach waterfalls are almost always the most hazardous.

An example of a dramatic nearby clove lies off Route 9 in Cold Spring by the Putnam-Dutchess border. Along Clove Creek gorge lie the remains of an old stone grist mill. Last week, churning waters from recent storms there formed some of the loveliest types of falls found anywhere: ledge and curtain falls, as well as a curved, powerful slide section just north of Horton Road.

“After the weekend, the falls sounded like airplanes,” said Warren Eggerton, who lives with his wife Ellen in a hollow near the grist mill, and worries about his dogs going in whenever the main Clove Creek sluice becomes this forceful. He swore it was a “mere trickle” during the drought. 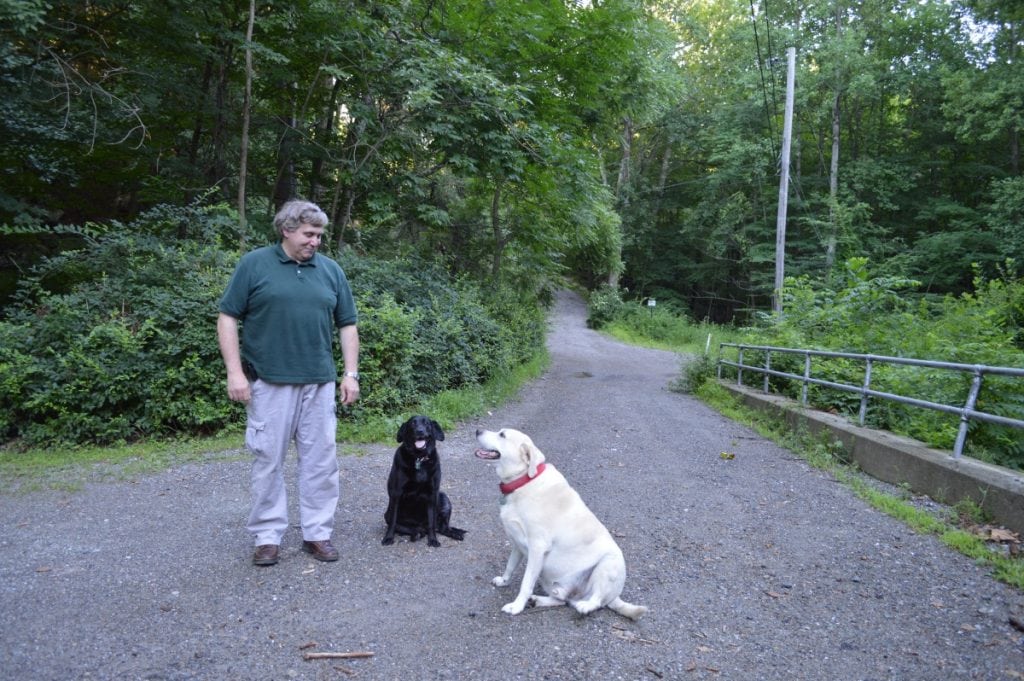 Meanwhile, Kristin Kucer of Beacon, who takes evening walks by Clove Creek from a friend’s house, relates local tales of United Nations Secretary-General Dag Hammarskjöld coming to sit by the great cascade here as a quick, meditative escape from New York City. (He died in a plane crash in 1961 on a UN work mission.)

Short and day-trips to falls abound. Cave-bound falls are as close as eastern Dutchess County, at Dover Plains’ Church Creek Caves off Tinkertown Rd. In Beacon, many of the manmade falls you see were harnessed for industrial purposes during its hatmaking heyday; Beacon’s natural whitewaters are edged by popular fishing and hiking spots. Some are formed by spilloff from dams like the Melzingah Reservoir at Dutchess Junction, where Beacon and Fishkill meet just north of Breakneck Ridge.

Most dramatic in the state? The falls and gorges at Ithaca are associated with the history of the Algonquins and Lenape. Taughannock Falls have the highest vertical drop in New York, at 215 feet. 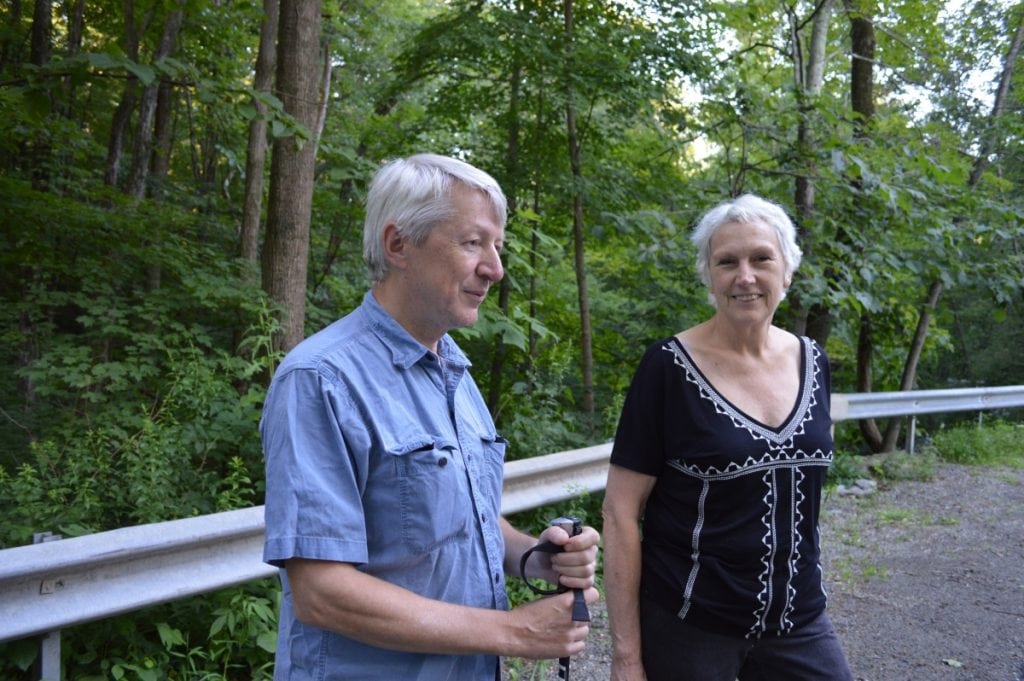 Matti Peltonen of Cold Spring, and Kristin Kucer of Beacon, at bridge over Clove Creek Falls on Horton Road.

Indian Brook Falls at Cold Spring are attached to a Native American tale involving the Wappingers tribe. As Donato relates it, a Wappinger named Manteo fell in love with a captured Dutchman and pleaded he be spared so she could marry him. But one day he saw a Dutch-flagged ship and made a swim for it. Bereft Manteo eventually “flung herself from the top of Indian Brook Falls, drowning in the pool below. Whistling Willie’s restaurant [at Routes 301 and 9D, Cold Spring], once bore the name Hotel Manteo, in honor of her.” The name is still emblazoned on the wall in the room to the right of the bar.

The magical call of waterfall may span the ages, but today more than ever, it’s time to know the hazards that accompany their beauty. This isn’t just about the careless selfie-taker, although they now count among the too-many New Yorkers who die or are injured around waterfalls. 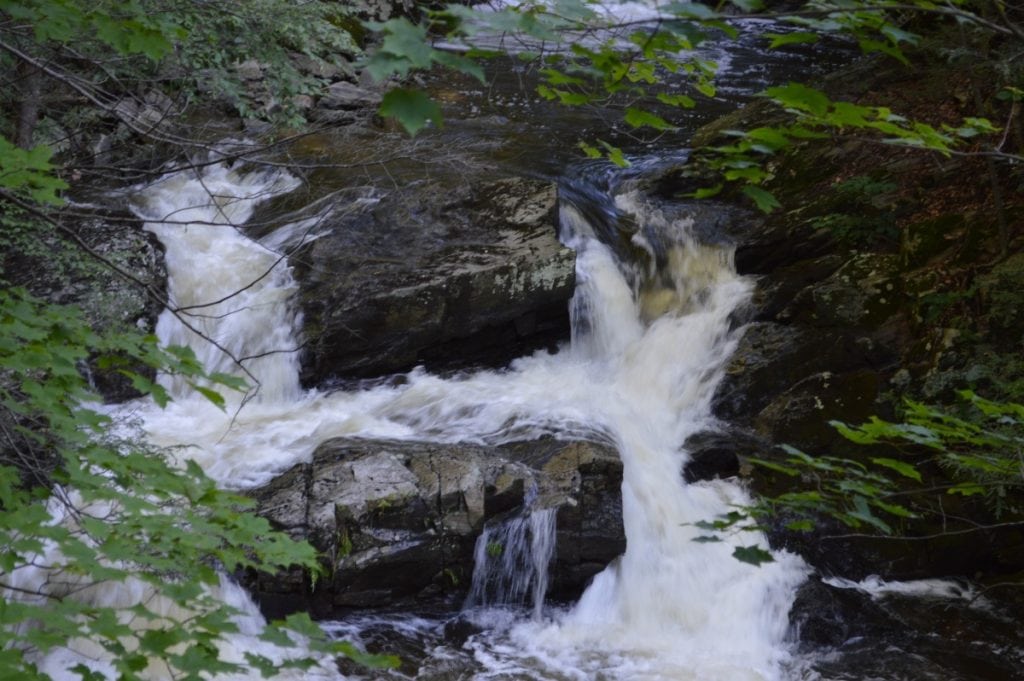 This is also about the frequency and ferocity of inundations we’ve seen in recent years, with storms like Sandy and Irene. More recent waterfall deaths have been reported at Letchworth in western New York, Roaring Brook in the Adirondacks, and Kaaterskill near Hunter Mountain, among others. Statewide statistics are hard to come by, say rangers, as waterfall accidents are sometimes counted as drowning or hiking accidents. At Roaring Brook, one death came when a photographer slipped on wet rocks; another occurred when a 12-year-old boy was killed by a falling boulder, according to the online Adirondack Almanac. 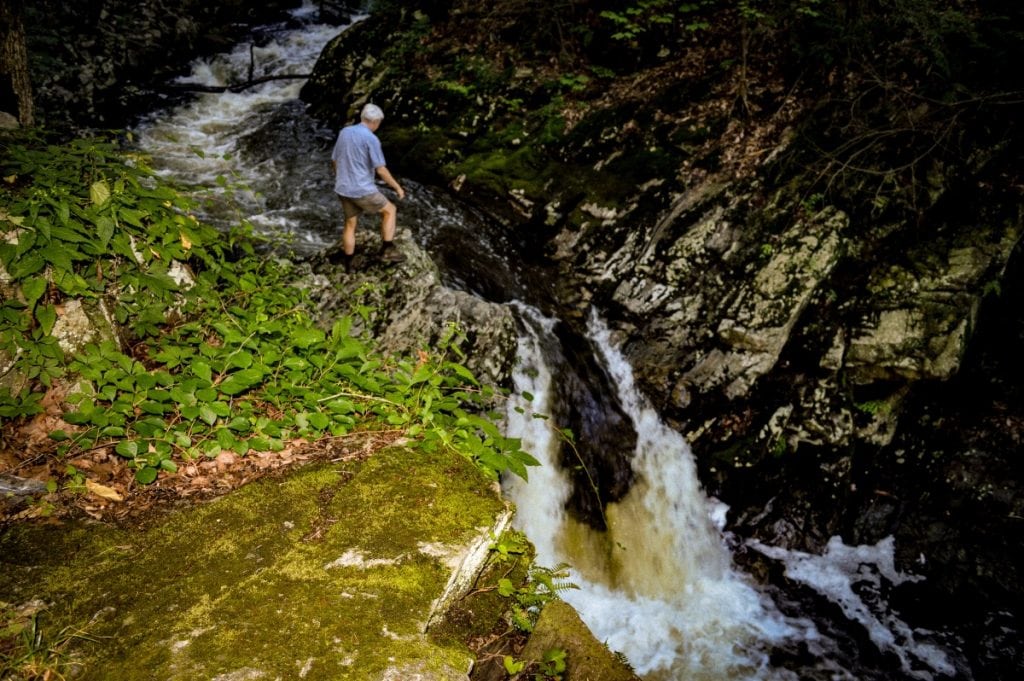 So while The Current would like you to explore our regional cascades, we also hope to provide an informal guide to climb or walk them safely.

As the state parks department notes (nysparks.com), many falls are “on undeveloped, untamed land… The environment is so unpredictable, the chance of something happening if you visit a lot of waterfalls is considerable.”

No guide can be perpetually up to date with on-the-ground conditions.

To deal with both normal and extreme waterfalls conditions, then, think hard about your footwear and clothes. Wear serious hiking shoes with strong soles, and try crampons to “give your shoes the extra needed grip for slippery creek-walks and waterfall climbing,” says NYS Parks. “Don’t wear loose clothing that can snag on branches.” 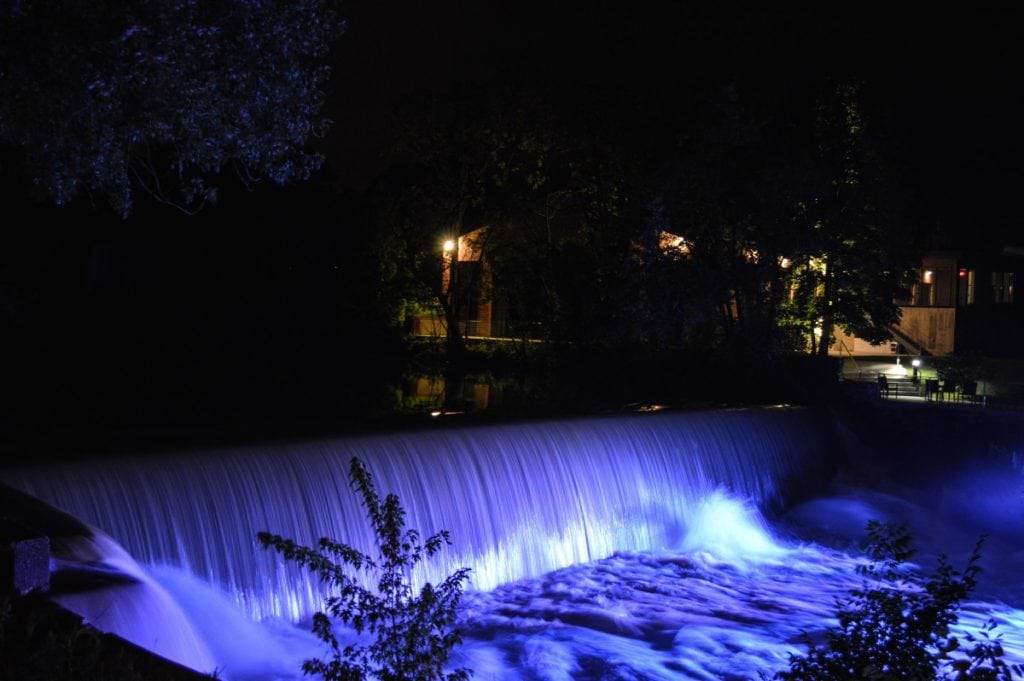 Roundhouse Falls, at night, in City of Beacon.

As on most hikes, you should bring drinking water. Fast-moving water is not a guarantee against bacterium like giardia. “If you are climbing or navigating a dangerous area, it’s not the time to be holding your camera, getting out your sunglasses, or swigging from your water bottle,” warns NYS Parks. “The only thing you should be holding on a tough hike is a reliable walking stick.” Yes, just one. The other hand may be needed to break a fall.

When you push boundaries around waterfalls, you risk your life, your hiking companions’, and emergency and rescue workers’. Rangers advise people never to do falls or creek trails alone.

If using any special equipment, train carefully. If there’s going to be or has been heavy rain or snow, it’s best not to creek-walk in narrow gorges. In cooler months, look for ice under mud and mist that freezes on rock surfaces; in warmer, watch for algaes, and in hunting season, be aware there may be hunters. 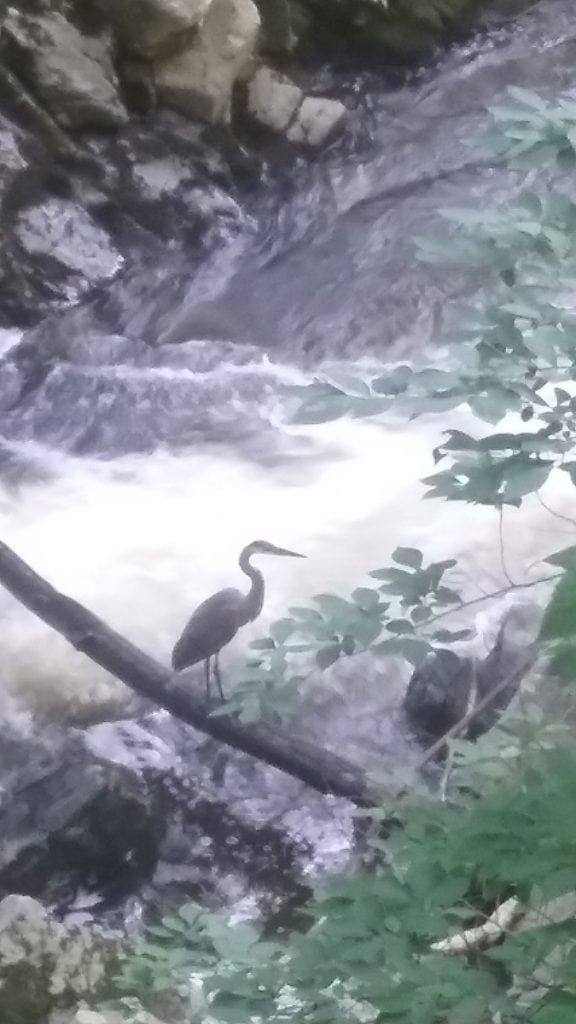 Finally, most people don’t obey the warnings like Danger! and No Trespassing, but they should. There’s a reason one hears so many tragic tales about the most alluring falls.

“If you are climbing or navigating a dangerous area, it’s not the time to be holding your camera, getting out your sunglasses, or swigging from your water bottle.”