When the career coach Lauree Ostrofsky returned to Dutchess County three years ago to assist her parents with health issues after 15 years living in Washington, D.C., and New York City, she found herself productive by working alone but also missing something. “I didn’t know people,” she says. “I was missing the social interaction I had established elsewhere.”

In December 2014, Ostrofsky connected with Scott Tillitt of Beacon’s Beahive, who introduced her to a few like-minded professional women. It turned out there were many women like Ostrofsky in the Highlands attempting to take a talent or expertise and turn it into a small business. They all missed having a community of peers with whom they could share ideas, frustrations, skills, commiserations and celebrations. 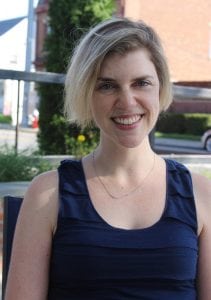 Lauree Ostrofsky (Photo by A. Rooney)

“Scott was great about opening up his network to everyone,” Ostrofsky recalls. “I met with four or five other women; all of us had our own businesses. We talked a bit about that, and it just felt good to be around each other.”

In the 18 months since, the group, which Ostrofsky decided to call Hudson Valley Women in Business, has grown to nearly 500 women linked through Facebook. About 20 to 30 meet in person monthly to discuss topics such as marketing, sales, finance, employees, getting started, growing into the next stage and selling a business. The members who show up are typically from a wide geographical area, so the gatherings are rotated among towns such as Rhinebeck, New Paltz and Beacon. Many began their businesses in the past five years, but Ostrofsky says the group is attracting more experienced owners as well.

The gathering for August was held in the new Beacon premises of Katie Hellmuth Martin’s online businesses: A Little Beacon Blog, Tin Shingle and InHouseDesign Media. “I’ve been home for 11 years, working with a lot of people,” says Hellmuth Martin. “Now it is time to get out and meet people.”

The first hour was devoted to chatting and networking. Hellmuth Martin then offered advice on using the email marketing service Mailchimp, and asked each woman to introduce herself and briefly describe her business. The occupations included graphic designer, bed & breakfast owner, film producer, marketing specialist for nonprofits, real estate agent, caterer, doula, marriage and family therapist, travel planner, photographer, Reiki practitioner, a woman who hoped to start a business helping people save money by strategically shopping online, and a former preschool teacher of 25 years who is “trying to find out what to do when I grow up.” 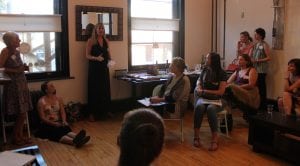 Katie Hellmuth Martin (center) speaks to the Hudson Valley Women in Business group about email marketing. The meet-up was held in Martin’s new offices, from which she operates A Little Beacon Blog. (Photo by A. Rooney)

Ostrofsky, says she sought out women for a group because “there’s something special about how we ‘do’ business and ‘do’ community. Women have an emotional component in an empowered, strong way. We approach things differently, valuing community and growth. When one women finds something that works for her, she wants her friends to know. We want other women to feel supported; that’s our desire.”

Ostrofsky came to her calling as a career coach in a startling way. At age 28, she was diagnosed with a brain tumor. While recovering, a nurse advised her: “What we think about, we create in our lives.”

She says she became so focused on getting well that “I was able to heal myself. It propelled me forward. I quit my job, went to art school, started [my business] Simply Leap, traveled, moved to a new city and ended my marriage. With each choice I believed that more was possible than I could ever imagine, and each time it came true. I thought, If I’m sitting on that kind of power, what if my job was to help people realize that they have that power too, and shouldn’t feel beholden to anything?”

Her clients tend to be women who want to change careers or start businesses. Hudson Valley Women in Business “becomes a place to get away from saying, ‘But I’m not good at that’ by building confidence in a nurturing way,” she says. “We have many barters come from our group, and women using other women’s businesses. What sets this group apart is that it’s very supportive, welcoming and safe. A place where you can figure it out while being slightly awkward.”

The next meet-up is scheduled for Sept. 12 at the One-on-One Salon in Rhinebeck. For more information, visit hudsonvalleywomeninbusiness.com.