It’s common to be consumed by last-minute anxiety on the eve of an international trip. Will I understand what people are saying? Will I be able to work out the currency conversion? Can I figure out how to get around?

When Joseph Bertolozzi of Beacon traveled to Paris in 2013, his concerns were unique.

“What if I get to the Eiffel Tower and it’s just 500 different B flats?” he recalled asking himself. 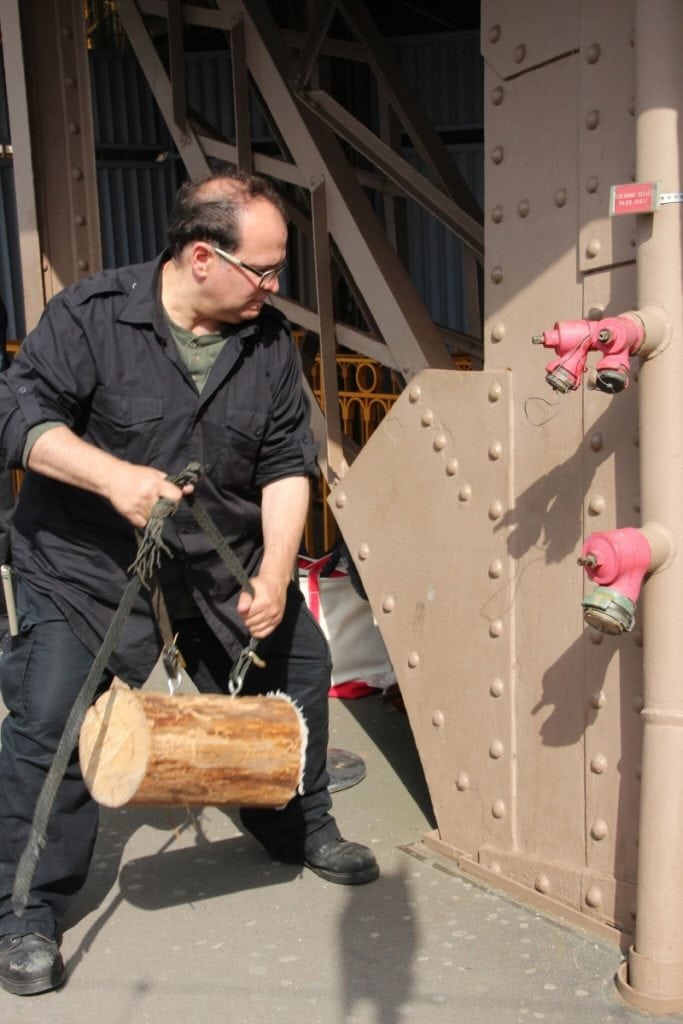 Bertolozzi wasn’t in the French capital to sightsee. He was there to “play” the Eiffel Tower: Banging its surfaces with implements, meticulously recording and cataloguing every thwack and using those sounds to create music. The results of this percussive experiment, Tower Music/Musique de la Tour, was released earlier this year on innova, the label of the American Composers Forum. And now Beacon is throwing a soiree to celebrate.

On Saturday, Sept. 10, from 6 p.m. to 10 p.m., South Avenue will be closed from Beacon St. to Main for Paris on Hudson. Organized by the non-profit Rutigliano Group, the event will feature live music, French food, a 20-foot tall Eiffel Tower replica attached to Bank Square Coffeehouse, mimes, jugglers, strolling accordionists, free berets and a few surprises. “I wanted to throw a really cool record party for my hometown,” Bertolozzi said.

The composer’s work is also the focus of a 16-minute documentary, Bridge Music by Andrew Porter, that will open the Beacon Independent Film Festival on Friday, Sept. 16. The film chronicles Bertolozzi’s first epic percussive experiment, when in 2004 he turned the Mid-Hudson Bridge in Poughkeepsie into the largest percussive instrument in the world. 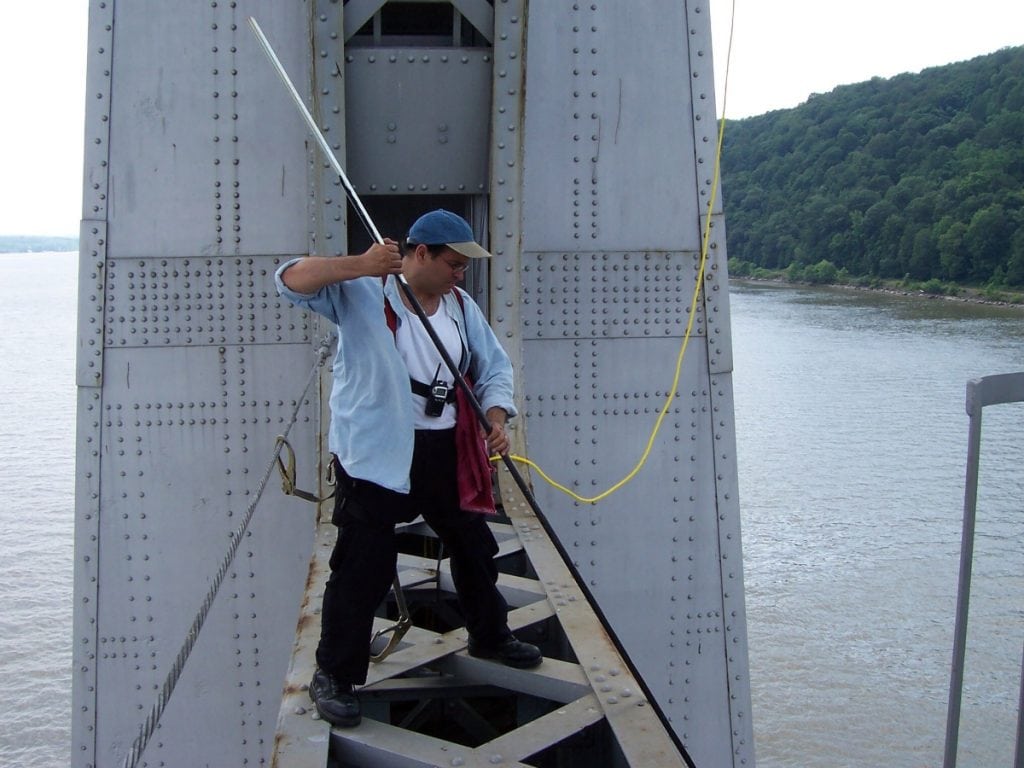 Bertolozzi says the inspiration to play the Eiffel Tower came before he thought of playing the Mid-Hudson Bridge. “I just never thought I’d ever get permission to play the Eiffel Tower,” he said. “But I knew it was a cool concept so I thought, ‘Where else could I do this?’ Gustave Eiffel was a bridge builder, and at the time the quadricentennial of Henry Hudson’s trip up the Hudson [in 1609] was five years away, so I thought I’d do it on a bridge over the Hudson.”

A year after Bridge Music came out, Bertolozzi worked up the nerve to write to the mayor of Paris for permission to play the Eiffel Tower, citing his album as evidence he could pull it off. Five years later, he was in Paris.

“It took a total of 12 years to create Bridge Music and Tower Music, and only a year and a half of that was actually spent composing,” he said. “The rest of the time was letter writing, phone calls, fundraising and dead ends.”

Both pieces were recorded by attaching contact microphones to various surfaces, rather than holding a microphone close to the surface. Bertolozzi chose to record that way to isolate the sounds of the structures without picking up extraneous noise such as seagull calls and car horns. But he soon discovered that the sounds the contact mics recorded were different than what he heard while “playing” the structures, since the sounds changed as they traveled through the air to his ears. It’s why he cautions listeners that, should they start banging away at the Mid-Hudson Bridge with a rubber mallet, it’s not going to sound the same as the recordings.

Where to Find Tower Music

To watch a music video of Bertolozzi playing the tower, see below or visit josephbertolozzi.com. His albums are available for download at iTunes and Amazon or on CD from Amazon. Tower Music also can be streamed on Apple Music. 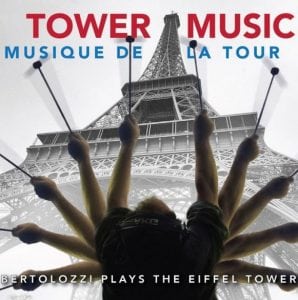 Each structure presented its own challenges. “The Eiffel Tower had more melodic notes, a wider range of melody notes to draw from, but it was weak in deep, bass tones,” he said. “The bridge has those vertical suspension cables, which act like a bass guitar, which is why most of the melodic thrust of those pieces are this deep bass sound. There are high pitches too, but they’re unrelated to the bass strings. I couldn’t really connect them.

“Both instruments, the tower and the bridge, they’re both incomplete. But the task was to make them sound as if they weren’t missing anything. It’s like comparing a violin to a piano. A violin only has four strings, while a piano has 88 strings, more even, since the strings are doubled and tripled. But when you hear a piece that was composed for a solo violin, it doesn’t sound like it’s missing anything.”

Although the structures sound different via contact mics than they do if you’re standing next to Bertolozzi as he plays, the composer says the sounds weren’t manipulated in any way: no effects, pitch shifts, time changes or modulations. “The idea was to play the tower, so that you hear the tower,” he said. “I didn’t want to create something that was only possible via studio tricks.” 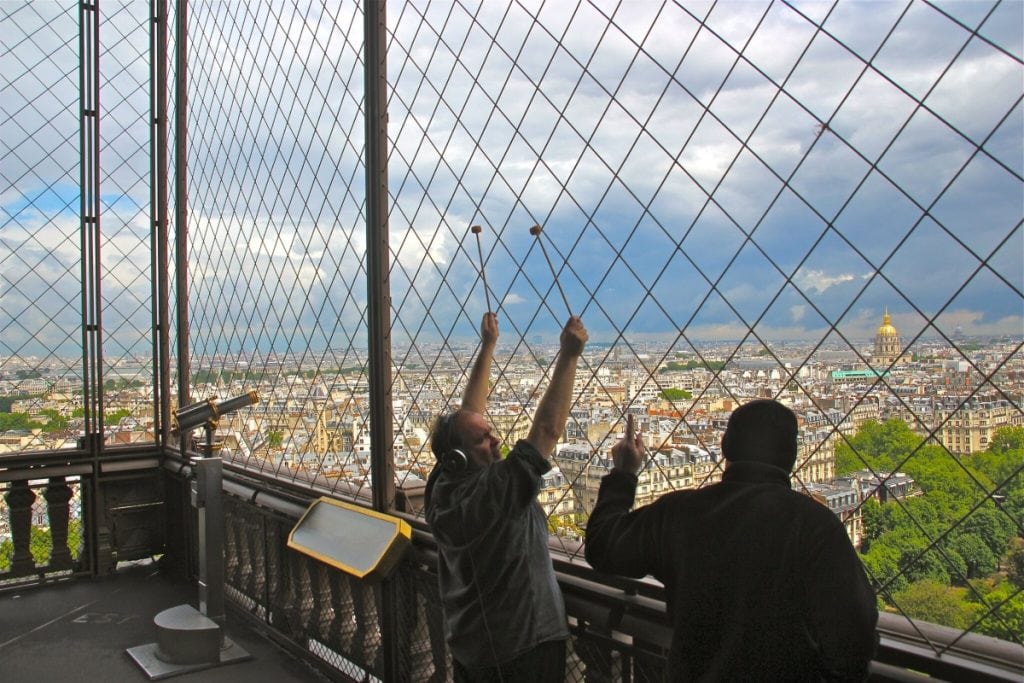 Bertolozzi said he assembled and composed his pieces on a computer not to create sounds that weren’t there but to compensate for the fact that he didn’t have a band of musicians banging on the structures simultaneously.

“This was always intended to be a live event, not just a spacey concept,” he said. “It would be very simple. All you need is a lot of money.”

How would it be done, technically? For both projects, Bertolozzi kept a meticulous log of where every mic was placed and never programmed any rhythmic sequence faster than a human could actually play. He even wrote out sheet music. “Instead of saying ‘violin, clarinet, flute,’ it says ‘suspension cable, spindle, estuary sign,’ ” he explained. “So you have live musicians playing using sheet music, standing at the exact spots we recorded. All the mics would have a mile or two of cable, running down the tower or bridge, and into an audio truck, which goes into a mixing board, and then out to loudspeakers on a soundstage with a JumboTron so you can watch live video of the performers.”

Bertolozzi said that the operating company that runs the Eiffel Tower left the door open for a live performance. “They told me that it would be a whole different project and a whole different process,” he said. “But they also said, ‘You know how to get in touch with us now.’ “

“I have no doubt that a live performance of Tower Music will happen one day,” he said, “even if it’s far in the future after I’ve kicked the bucket. But it would be cool to be around to see it.”