Detained in Monroe after call from Hasidic village

A man living in Garrison and apparently struggling with mental illness was arrested on Sept. 23 at Kiryas Joel, a Hasidic village in Orange County, after police say he showed up wearing body armor and made terroristic threats.

State police said Frank Zebzda, 30, faces six charges, including making a terroristic threat and wearing of a body vest, both felonies, resisting arrest when officers removed the armor and possession of a small amount of marijuana. Police say he also was carrying a folding pocket knife.

The state police said it received a phone call from the Kiryas Joel Public Safety Office that there was an individual in the village wearing a black tactical vest and taking photos of the schools, the Public Safety Building and the shopping mall.

While being interviewed by troopers, police say Zenzda became belligerent and refused to identify himself.  As the troopers were placing Zebzda under arrest, he began to scream racial and ethnic obscenities. 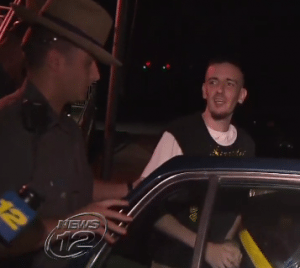 Asked by a reporter from News 12 why he was wearing armor, he responded “Because you’re allowed to because of the Second Amendment.” He told the judge he was mentally ill, on disability and living with his mother in Garrison, and that he was at Kiryas Joel because he is a medical proxy for a resident there with cancer. It was the resident’s family who called the police, he said.

According to News 12, Zebzda told the judge he wanted to represent himself, because he knows the Constitution very well, but at another point said, “I don’t know how I got here.” He will return to court on Sept. 26.

On Zebzda’s Facebook page he says he attended Lakeland and Ossining high schools. He posted in May about his struggles with mental illness.

“From the constant hell of anxiety, to the darkness of depression, from people not understanding to not listening, mental illness is a black cloud the covers many of us that though we angrily lash out, have no way to cope or express how to feel better in that moment,” he wrote. “No matter how much we beat the disease, the cloud is always there and people seem to notice…. We all know someone who struggles with a mental illness, know that the disease does not define them but is a part of them.”

He also posted in June about a GoFundMe campaign he had begun to finance The 13th Agenda, a “freedom-fighting organization that we are trying to build from the ground up.” The page, which has been removed, said Zebzda was from Yorktown Heights.