The end of the season is the easiest time of the year to neglect a vegetable garden. You’re tired, distracted and there isn’t anything left to harvest. Not to mention the tedium of daily watering during a hot, dry summer. But the fall is a crucial time because it’s when you should attack next year’s weeds.

What is a weed? Antonio DiTommaso, who studies weed ecology and management at Cornell University (and maintains a teaching garden that has only weeds), defines it as “any plant that is in a place where it isn’t wanted.” While weeds have a role in the ecosystem, purslane isn’t welcome in a row of tomatoes. Weeds compete for light, nutrients and water and interfere with the plants you are cultivating.

Vigilant weed control early in spring can make summer maintenance easier. You want to remove the weeds as seedlings and prevent them from making more of themselves. The same reasoning applies to fall weeding. 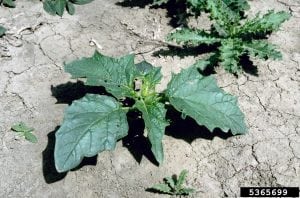 Velvetleaf can be controlled by removing seedlings.

“This time of year we get winter annual species that are germinating, like chickweeds and field penny cress, plants that will be stimulated to emerge when days are shorter and temperatures get cooler,” DiTommaso explained. “They’ll spend winter under the snow and then at snow melt they’re ready to go and will complete their lifecycle by June.”

Snare those weeds now and you’re ahead of the game. Planting a cover crop is one method to protect the soil, inhibit weed growth and add nutrients.

Shade also kills interlopers. “Weeds aren’t very competitive under shade,” says DiTommaso. “They love light. The seeds can detect the wavelength of light and if another plant is above them.”

He suggested crops that leaf quickly. Vegetables like carrots and onions that have light foliage and grow slowly will be weedier. Intercropping the large leaves of lettuce, for example, between tomato plants will  block light from reaching the soil so weeds don’t get any signals to grow.

I have always used natural mulch as a ground cover, but DiTommaso persuaded me to try fabric. Since you’re tilling the soil only in areas where you’re planting and the cloth is covering the rest of the garden, you’re not disturbing the weed seedbed. It inhibits weeds without damaging the soil. An added benefit is protecting tomatoes from early blight, which is carried to their leaves by rainwater. 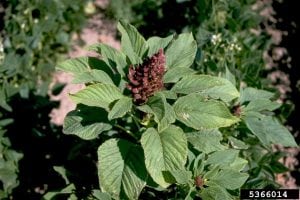 Knowing your enemy and understanding succession helps weed control, too. You can tell how recently soil was disturbed by what’s growing in it. Annual weeds pop up first in disturbed soil, including pigweed (Amaranth), lamb’s quarters, (Chenopodium album) and purslane. If left to their own devices, biannual species such as garlic mustard will arrive next. Perennial weeds like goldenrod (Solidago canadensis) then dominate, followed by saplings like birch and poplar.

“When we’re tilling, we’re pushing back succession to favor annuals, weeds that are perfectly adapted,” DiTommaso says. “Their strategy is rapid growth and copious production of seeds. Their only link from one year to next is via seeds.” Disrupt that seed production and you will have less maintenance.

Finally, what to do with weeds once you pull them? This is where identification comes in handy. Knowing what you’re dealing with dictates the disposal method. Some weeds can be composted, especially when they’re seedlings. But others, such as rhizomes, even if only an inch long, can re-root. Purslane is another prolific seeder and has a high water content, which means even immature seeds can sprout. DiTommaso recommends letting purslane fry on cement in the sun before putting it in the trash.

The last thing you want to do is help a weed reproduce. DiTommaso cited quackgrass as an example. “It has rhizomes. You decide to chop it up to kill it and now you have 26 plants coming up everywhere. You’ve got to know what it is and its lifecycle.”

To learn more, visit DiTommaso’s Weed Ecology and Management Lab at weedecology.css.cornell.edu. He and a co-author are also updating the standard reference, Weeds of the Northeast, for publication next year.