The crowds are gone, and the colors have arrived

Two eye-pleasing day trips or an overnight excursion lie less than 50 miles west of Beacon — with plenty of history thrown in. The fall color spectacle is starting to dab the landscape, and a week will make a big difference. Now is the time to plan your trip.

The Current’s travel guru urges Beaconites and Philipstowners to consider two day trips to the same vicinity. The first is to High Point State Park, along with Milford, Penn., and the Delaware Water Gap National Recreation Area. The other begins at High Point and ventures a few miles north to explore the Upper Delaware River Scenic Byway. The trips could easily be combined for a weekend getaway.

The peak of Jersey

The highest point in New Jersey — 1,803 feet above sea level — is at High Point State Park in Sussex. A 220-foot obelisk, built as a war memorial in 1930, adds to breathtaking views of the Pocono Mountains, Catskill Mountains and Wallkill River Valley. The tower’s formidable stairway closes after Columbus Day but the vistas at its base, overlooking parts of New Jersey, Pennsylvania and New York, are equally impressive. 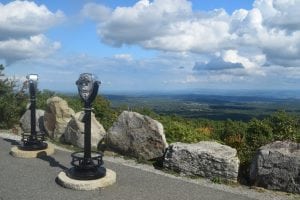 Milford, Penn., is 10 miles northwest of High Point as the crow flies. Founded in 1796, the village has fewer than 1,000 residents but boasts numerous historic buildings, including the Grey Towers National Historic Site, Jervis Gordon Grist Mill Historic District, Metz Ice Plant, Pike County Courthouse and Arisbe, the home of Charles S. Peirce (1839-1914), the scientist known as “the father of pragmatism.” 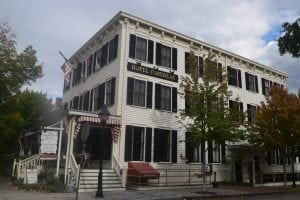 Two hotels and their eateries also exude history. The Hotel Fauchere, which dates to 1852, was known for  “innovative cuisine and stylish inn keeping,” traditions that continue in its Delmonico Room, Bar Louis and Patisserie.

The Dimmick Inn opened in 1828 and has been a hotel, boardinghouse, Chinese restaurant, Jewish delicatessen, bawdyhouse and cabaret. Today it offers traditional American fare.

A wide range of other accommodations and restaurants are available, and Milford hosts a farmers’ market on Sundays from 10 a.m. until 2 p.m. through Oct. 16.

Milford is the southern gateway to the Delaware Water Gap National Recreation Area, a 70,000-acre protected area that straddles a 40-mile stretch of the Delaware River along the Pennsylvania-New Jersey border. While the visitor center and park services are closed for the season, driving the length of the park along Route 209 is a very pleasant fall outing. With the crowds gone, it is one of the best times to enjoy the trails, tranquility and foliage.

The trails include the 31-mile McDade Trail which parallels the river and features forest, field and river views. With access points scattered along Route 209, its surface is suitable for mountain and hybrid bikes and hiking. 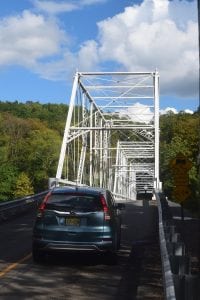 The historic bridge at Dingman’s Ferry. (Photo by M. Turton)

Many visitors drive over the Delaware and back on the historic bridge at Dingman’s Ferry. Dating to the mid-18th century, it still provides an important link between Sussex and Pike counties. The $1 toll seems to add to the bridge’s appeal.

On Saturday, Oct. 22, Millbrook Village will host “Octivities” from 2 to 7 p.m. with crafts for kids, a scavenger hunt and a lantern tour of historic buildings. For details, visit milfordpa.us.

The southern gateway to the Upper Delaware River Scenic Byway is 12 miles north of High Point. The byway winds along Route 97, a beautiful road that follows the meandering river for 70 miles between Port Jervis and Hancock.

Riverfront villages along the way include Barryville, Narrowsburg and Callicoon. Each offers a variety of restaurants, shops and points of historic interest. Fort Decker, a stone house built from the remains of a fort burned during the Revolutionary War, is located at the northern edge of Port Jervis. On Oct. 29 it will host the Navasing Long Rifle Re-enactors Encampment from 1 to 4 p.m. 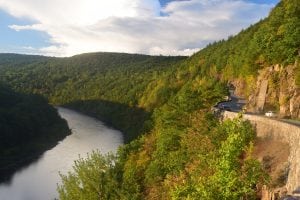 The most spectacular views are just north of Port Jervis at Hawk’s Nest. This dramatic, twisting section of the highway has been used by BMW, Saab, Cadillac and Honda in TV commercials.

Minisink Ford is home to the oldest existing wire cable suspension bridge in the U.S. Erected in 1847 as part of the Delaware Hudson Canal, it was designed by and built under the supervision of John Roebling, who later designed the Brooklyn Bridge.

The village of Hancock, named for John Hancock, marks the northern end of the byway. For many years the village produced Louisville Slugger baseball bats, including for Babe Ruth. Bluestone from the area was used in the construction of the Statue of Liberty and the Empire State Building. Today the village is a mecca for sport fishing.