Writer has a full plate with “The Lunch Witch”

Deb Lucke, a Philipstown writer and illustrator who specializes in books filled with witches, canines, frogs and odd little children, says her characters come to life as she creates them.

“I draw, draw, draw and the characters get revealed: how they move and how they act — the voice gets clearer,” she explains. The rights to her 2015 graphic novel, The Lunch Witch, the first of a series, have been optioned by Amblin’ Partners, whose CEO is director Steven Spielberg, with the idea it would make a great live-action movie.

Lucke says the book, which is aimed at tweens but popular with children and adults, seem to fit a genre that someone in the film industry described to her as “family friendly subversive.” It tells the story of Grunhilda the Black Heart, who inherits the family cauldron and gets a job as a lunch lady. There she meets a student who, like herself, is an outsider. But, as a witch, she has no instinct for connection and helping others. 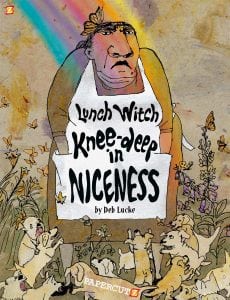 The second Lunch Witch book will be published in October.

The second book in the series, Lunch Witch: Knee-Deep In Niceness, in which the witch loves her dog too much (at least for a witch) and even sometimes likes children, will be published on Oct. 25. A release party and nose-mask-making workshop is scheduled for Binnacle Books in Beacon at 5 p.m. on Saturday, Oct. 15.

It’s a heady time for the artist, who contributes to The Current and also teaches graphic novel classes at Compass Arts in Beacon (her course for 10- to 14-year-olds has openings; a class for adults begins in November). She studied graphic design at the University of Connecticut, where most of her classes were in drawing and painting. But she recalls that one of her professors made an indelible impression, telling the class, “You can’t focus on the execution, just the ideas.” 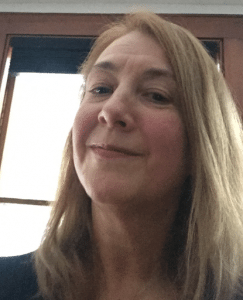 Although Lucke recalls being “almost fired for not being able to do mechanicals” at her first job in advertising, she escaped unscathed because her work sold. Her career in advertising led to films. All these careers morphed easily into illustration, she says, because she learned what works visually. She says she now approaches her storytelling and art like a filmmaker, thinking of her characters as actors. “I do the backgrounds last,” she says. “If I couldn’t work at things in layers, there’d be problems.”

Beginning with a sketchbook, Lucke draws loosely, and “what interests me will start to evolve. I’ll get an idea but not know where I’m going with it.” She continues with a method of her own making: a long strip of paper bent and folded, accordion-style. On it she draws a “problem” on the first square, and a “therefore/because” on the next. 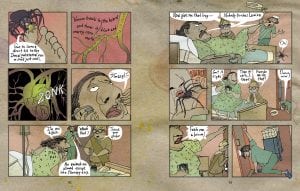 An excerpt from Knee Deep in Niceness, by Deb Lucke (click to enlarge)

“Something small on page one goes wrong, and then what happens?” she says. “I love having all these tiny little steps, and I always go back and tie up all of them,” Lucke says. “The subplots are easy for me, the big plots harder.”

Before she became a writer and illustrator, Lucke spent time illustrating greeting cards, taking screenwriting classes and trying to break into directing. After finding an agent, she focused on creating a book for tweens. “I’m in perfect sync with the 10- and 11-year-olds because my writing is full of gross things and slapstick,” she says.

Inspired by a friend who landed a job, in her 40s, as a lunch lady, Lucke wrote The Lunch Witch as a chapter book. “What got me going was, What if the lunch lady had secrets?” she recalls. “My father had a cousin who was the head of the lunch ladies, so that played a part. It wasn’t until I had written the whole book before I remembered I had worked in the cafeteria at college.” 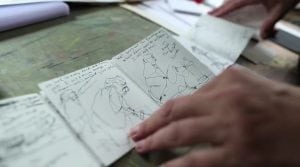 The story included a child who is the adult’s “problem to solve. She changes slowly over time and the kid becomes the arc of the story; it’s structured like a detective novel.”

In the middle of writing the book, Lucke says she recognized “this one actually had legs. All the other ideas I had were one-offs.” And yet it was a tough sell for publishers. “They weren’t interested because the main character was an adult, which broke the rules” of books for tweens, she says. “I kept breaking the rules, maybe because I didn’t know what they were!”

After she revised the chapter book to make it a graphic novel, and Papercutz, a publisher of graphic novels for kids, offered to buy the book as the first in a series.

The book received enthusiastic reviews and became popular beyond its target audience of third- to seventh-graders. Lucke says she knows this from her fan mail and meeting readers at events. Many parents tell her they bought the book for an older child and a younger sibling loved it, too. “I think a lot of middle-aged women are liking the book too,” she says with a laugh.

Both Lunch Witch books can be interpreted in darker and lighter ways. “I don’t have terrible things happen, but there are deep seams underneath,” Lucke explains. “Sometimes the younger readers don’t know a word I’ve used, but they’re able to figure out it isn’t good.”