Hits and misses, and endless weeds

This summer I jumped at the chance to have a plot in the community garden on Cold Spring resident Libby Healy’s property, because my own yard has become too shady to grow vegetables. My husband and I were so enthusiastic that we asked for two 10 x 20 foot plots before reason got the better of us and we scaled back.

I wouldn’t call it the best garden I’ve done, but we just used the last peppers in salads this week and I’m still ripening green tomatoes in paper bags. We kept it simple, planting the relatively few vegetables we most wanted in abundance. Tomatoes were our priority and we devoted a third of the space to them. We also planted three kinds of peppers, a few carrots, a row of mixed lettuces, a square of cucumbers, a row of eggplant and two kinds of squash. At home, I grew herbs in containers because I like being able to cut them at the moment I need them.

There were some misses. Some of the pepper plants I bought to transplant were mislabeled and instead of an abundance of green and red peppers, I had an abundance of mild, thin-skinned, pale-yellow peppers. I used them in salads but I wouldn’t have chosen them. This is the result of plant shopping with a toddler. Trying to keep her entertained and making sure she didn’t dismember any plants took up more attention than double-checking labels.

Life in general and hot, dry days got the best of us, too, and the garden felt it. Before a weeklong Memorial Day vacation, we sacrificed attentive watering for planting before the trip and there was an early season heat wave while we were gone. The peppers suffered for it and it stunted growth and production.

The squash managed alright, but we didn’t have enough time to thin the plants before they got too big. The seeds had a high germination rate (I’ve had good luck with seeds from JohnnySeeds.com) and were too overcrowded to produce well.

The yellow squash did better than the zucchini, which was a shame because we like zucchini better and I missed having that overflow where you have to get creative to cook it all. I wasn’t crazy about the variety, either. No matter how small or big the yellow squash was when I picked it, it had a tough skin, was full of seeds and took a long time to cook. 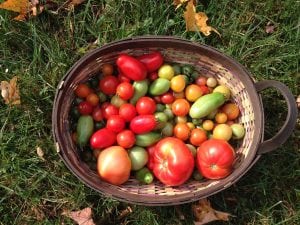 The last of the tomato harvest (Photo by P. Doan)

The tomatoes were a hit, especially the cherry and grape varieties. Our toddler would plop down between the plants and eat them faster than I could pick them. Good thing it’s an organic garden and I didn’t have to worry about residue from other plots because stopping her from eating them on the spot wasn’t possible. We tried two methods of staking, using wire cages, which turned out to be too short and easily toppled, and using stakes and twine, copying a technique we saw at Fishkill Farms last summer.

The twine and stakes would have worked well but, again, we didn’t have time to keep up with the growth. The plants overgrew the top layer and hung over it. We needed taller stakes and at least two more lines to keep them up. It was the more effective support, though, and we’ll do it again.

The weeds were a serious challenge. At home, I use raised beds with soil that I created by layering in organic materials. It’s been relatively weed-free all these years. Many of the plots at the community garden used landscape fabric and if I were to garden there again, I’d do that. With so many plots in one space, even if you keep up your own weeding, you’re going to have weeds. I used shredded leaves as mulch for moisture and weed control, but it wasn’t enough.

Here’s the best part of the community garden experience: it’s like being in dozens of backyard gardens. You get to see other people’s methods and I loved the abundance of colorful flowers and different plants. Going there was a pleasure. It’s the trade-off for the convenience of having the garden in your own yard and not having to make the effort to stop by when you can.

In the next Roots and Shoots, I’ll share lessons from other community gardeners’ experiences this summer.