When public tours of Constitution Island ended in 2009, the story of the family who lived there risked fading from local memory. That is being remedied by the Putnam History Museum in Cold Spring with its new exhibit, The World of Anna & Susan Warner which continues through the summer of 2017. It provides an overview of the lives of the sisters, best known for their novels, children’s literature, poetry and hymns, including Anna’s “Jesus Loves Me.”

On Saturday, Oct. 29, Ronnie Clark Coffey, the author of a book about Constitution Island, will talk at 5 p.m. at the museum about the Warner sisters and life on the island. 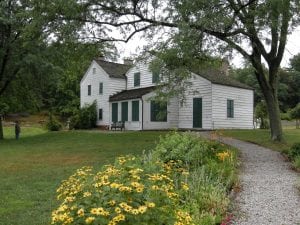 Henry Warner, a New York lawyer, purchased Constitution Island in 1836 to build a summer home. Less than two years later, after he lost a great deal of his fortune to real-estate speculation, Warner was forced to move his family, including his daughters (then 12 and 17), to the island year-round.

As the exhibition shows through documents such as auction inventories and foreclosure notices, the Warners became increasingly impoverished. That was the trigger for Susan Warner to become a novelist. Her first book, The Wide, Wide World was released in 1850 under a pseudonym. It was a huge success, with 13 editions published over two years, multiple translations, and more than a million copies sold. 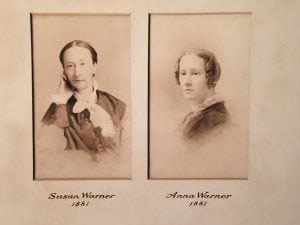 The Warner sisters (Photo by A. Rooney)

Anna Warner followed, also writing under a pseudonym, and both sisters became prolific, publishing nearly 70 novels between them. Their talents extended to sketching, with many of their drawings on display at the museum. Their Christian devotion carried them through the hardships and they spent many hours leading Bible studies at their home for West Point cadets.

To prepare the exhibit, the Putnam History Museum’s collections associate, John Duncan, spent several days at the Constitution Island archives, now housed at Locust Grove in Poughkeepsie. Duncan says what most intrigued him was the rediscovery of the lives and works of the Warners by scholars during the 1980s, a great deal of whom assessed the sisters through a feminist framework. 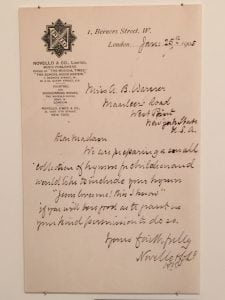 A letter written in 1905 from a British music publisher asking Anna Warner for permission to include ”Jesus Loves Me” in a hymnal for children (Photo by A. Rooney)

“I wanted to convey not only what they produced, but what they mean today,” says Duncan. The Warners had long been dismissed by critics as “reliant on feminine sentimentality and religious allegory,” he said, but have since been reconsidered in the context of their times. When The Wide, Wide World was reprinted in 1987 by Feminist Press, the book was presented as a celebration of the sisters as “examples of the constraints placed upon 19th-century women and the Warners’ ability to break those constraints, finding a way to shape their own lives.” 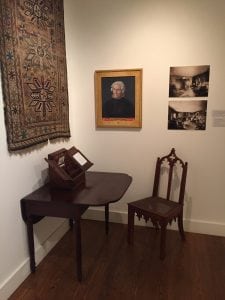 Furniture, photographs and objects associated with Anna and Susan Warner on display at the Putnam History Museum. (Photo by A. Rooney)

Besides the exhibit, the museum has a display of works from the permanent collection that includes paintings by Emil Holzhauer from the 1930s and 1940s of Cold Spring streetscapes. There is also a wall highlighting new acquisitions that will change monthly.