Firearms owners overflowed the Philipstown Town Hall meeting room Nov. 2 to urge the Town Board to reject a proposed law requiring that handguns be secured when not in use, describing it as unnecessary, unconstitutional, unenforceable and unwanted.

The audience, which included Putnam County District Attorney Bob Tendy, raised numerous objections to the proposal, which the board has sent to the town attorney for review.

Advocates for the measure addressed the board a month ago.

On Nov. 2 opponents — many wearing stickers that read “Guns Save Lives” — argued that the proposal would violate state and federal law; that responsible gun owners already practice gun safety; that guns need to remain unlocked and accessible for protection against everything from criminals to snakes and terrorists, and that hikers and other “predators” are more threatening to the community than guns. 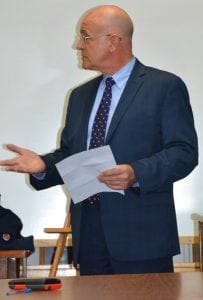 “The biggest issue is constitutionality,” said Tendy, because, he claimed, the U.S. Supreme Court has upheld the right to keep a gun available in the home “at a moment’s notice” for self-defense. He also noted that the New York State Assembly has passed a safe-storage measure, which is pending in the Senate, and predicted that Philipstown would invite lawsuits if it enacts its own version.

Town officials should “let the state fight it out in the [U.S.] Supreme Court” and not burden the public with expensive litigation, Tendy said. However, he commended the Town Board for encouraging public discussion. “That’s the way it should be done.”

Gregory Purdy, a Republican facing Sandy Galef to represent the 95th District in the Assembly, challenged the board to explain “how additional locks” on guns would not violate the Second Amendment. “It’s important to answer that question,” he said.

Speakers also questioned how the law would be enforced. “Who’s going to come in my house and see if my stuff is bolted down?” Nelsonville resident Tom Allen asked. Moreover, he said, by “inviting all the hikers up here from the city, we’re just turning our town into, like, open space for predators. That’s more dangerous than worrying about your guns.”

In a 5-4 decision in District of Columbia et al. vs. Heller (2008), the U.S. Supreme Court found that a trigger-lock requirement violated the Second Amendment. “The requirement that any lawful firearm in the home be disassembled or bound by a trigger lock makes it impossible for citizens to use arms for the core lawful purpose of self-defense and is hence unconstitutional.”

Barbara Lusk, a Philipstown resident, said guns in the home serve as a defense against terrorism. “ISIS is sending in well-experienced terrorists” to the U.S., and “recommending attacking out-of-the-way places,” she said.

Similarly, Garrison resident Evelyn Watters told the board that “a widespread armed citizenry is the best protection against crime and terrorism.” She said the proposed law would be meaningless. “It just becomes ludicrous. It doesn’t save lives. It’s just one of a million examples of an out-of-control and bloated government.” Before the meeting began, she circulated a petition, later presented to the Town Board, opposing the measure. 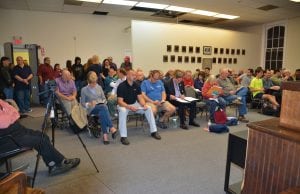 The audience at the Town Hall workshop on Nov. 2. (Photo by L.S. Armstrong)

Edward Sion, a retired New York Police Department sergeant, informed the board that “police cannot get to everybody in six seconds.” Although he lives in Patterson, he expressed dismay about the Philipstown proposal because “I see it as an issue that is going to grow.”

Other retired officers echoed his remarks. One, from Mahopac, described the draft measure as “absolutely preposterous and tyrannical.”

Several speakers objected not to the idea of safely storing guns but to being compelled to do so. “To mandate firearms storage by fiat is wrong on so many levels,” said Airinhos Serradas, a former Cold Spring village trustee. “Don’t attempt to take the moral high road.”

Town Board members remained reticent, despite audience demands that they voice their opinions. 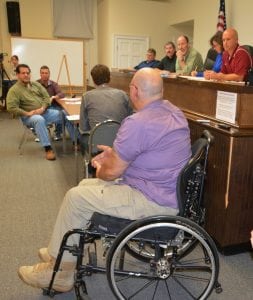 “We’re here to listen,” said Supervisor Richard Shea. “I’m not going to throw my 2-cents-worth in now.” A gun owner, he said that “I have not made up my mind on this,” although he also said that the board “would like to forward the idea of safe gun storage.”

Board Member John Van Tassel said that after the October presentation by safe-storage advocates he went home and added another level of security to his already locked-up guns. “I support safe storage,” he said, suggesting the debate might inspire other gun owners to “take it to the next level,” too.

By the end of the evening, another idea emerged from the interaction of board and audience: That proponents and opponents of the draft law collaborate in creating programs to teach gun safety to children and adults in Philipstown.