Dia:Beacon recently opened a long-term installation of early works by Robert Morris. Installed in two separate and relatively small galleries, the group consists of eight works, including an ensemble of six painted plywood sculptures that were first shown at the Green Gallery in New York in 1964 and a seventh object intended for that exhibition.

Robert Morris, 85, lives in upstate New York. He is a pioneering figure of Minimal, Conceptual, Postminimal and Land art and a theorist of these movements who has shown at the Whitney Museum of American Art, Tate Gallery, Art Institute of Chicago and Guggenheim.

These works were fabricated under Morris’s supervision for Dia:Beacon. He wanted an intimate feel and a specifically proportioned gallery for these works, with an emphasis on the viewer’s proximity and position. Morris is known for sculptures and installations that engage viewers in perceptual experiences and expose the gallery itself as an environment. 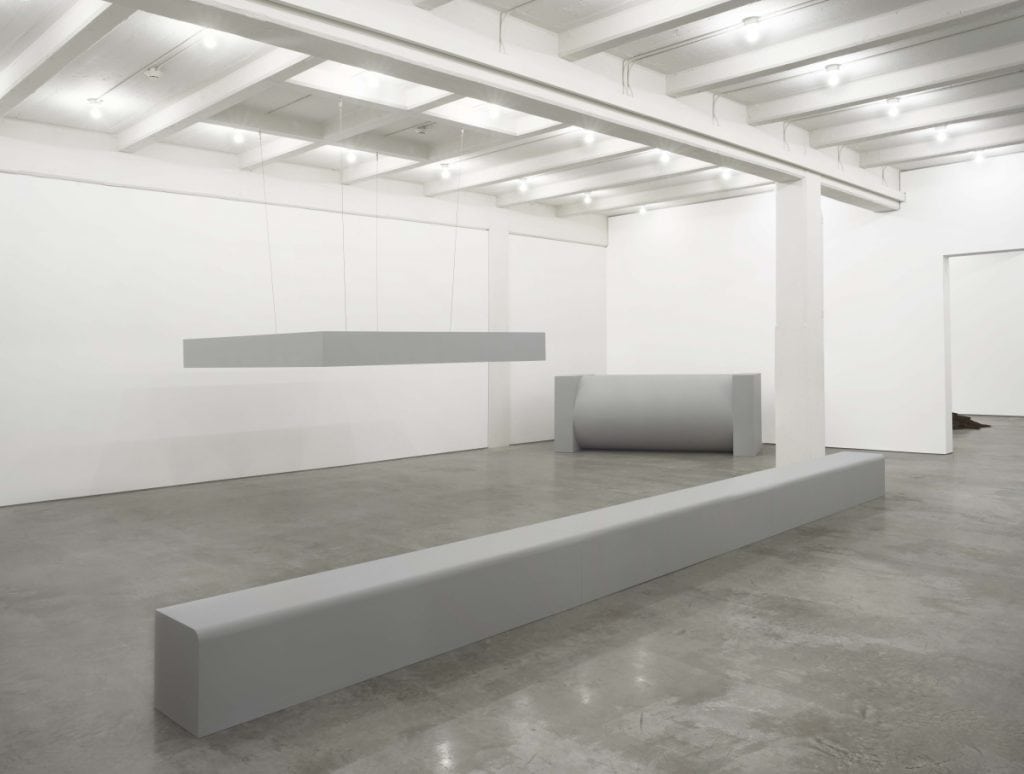 Characterized by simple geometry and scaled to the body, these “minimal” works are visually indivisible shapes, or gestalts, meant to be perceived by a standing viewer. As Morris wrote in a 1966 essay, Notes on Sculpture, Part I, the “parts are bound together in such a way that they offer a maximum resistance to perceptual separation.”

During the late 1960s Morris began to develop increasingly unstructured works of cut felt, scattered thread waste and piled earth. Made of soft materials, these projects shifted attention away from gestalt perception toward the process of making — and to the artist who manipulated materials more directly.

In an adjacent gallery is Untitled (Dirt) (1968), a critical example of Morris’s work during his anti-formalist period and turn away from rigid geometry. The piece consists of a mass of earth, peat, oil and debris poured onto the gallery floor. Untitled (Dirt) was produced at the same moment that Walter De Maria realized his first Earth Room, which has been a Dia satellite space since 1977 at 141 Wooster St. in New York. 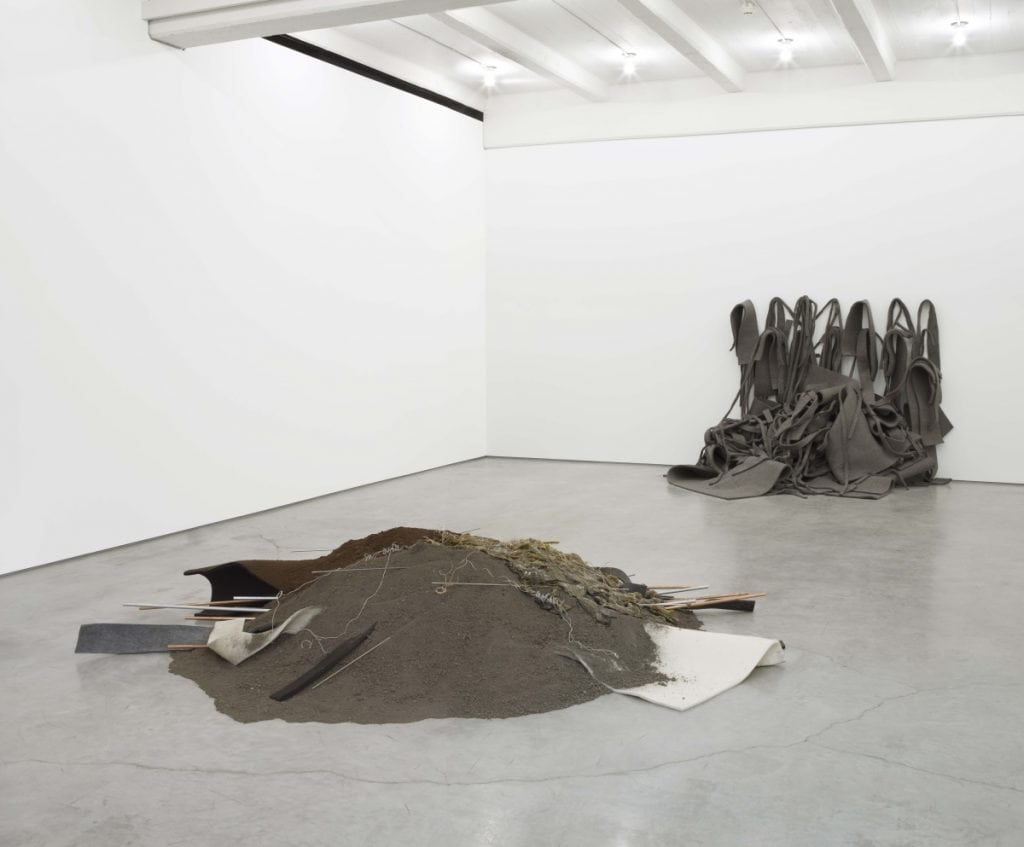 On the wall in the same room is the cut-felt piece Untitled (1967). For his first cut-felt works, Morris sliced progressively placed lines into rectangular sheets of the industrial material. He then hung the fabric sheets from nails, letting the felt fall naturally to the floor.

This unruly but elegant gray mass breaks down the geometric shapes of the minimal objects, bridging the space between the wall and floor occupied by Untitled (Dirt), a work considered radical in its time but still relevant. In contemporary terms it can be seen as an embodiment of “troubled” ground or perhaps as a comment on the state of the planet’s soil due to waste and neglect by industry.

The new works by Morris are well positioned near Richard Serra’s steel Union of the Torus and Scatter Piece (1967) and Robert Smithson’s Map of Broken Glass (Atlantis) (1969). This proximity posits relationships and influences between these artists’ approaches at the same moment in art history. 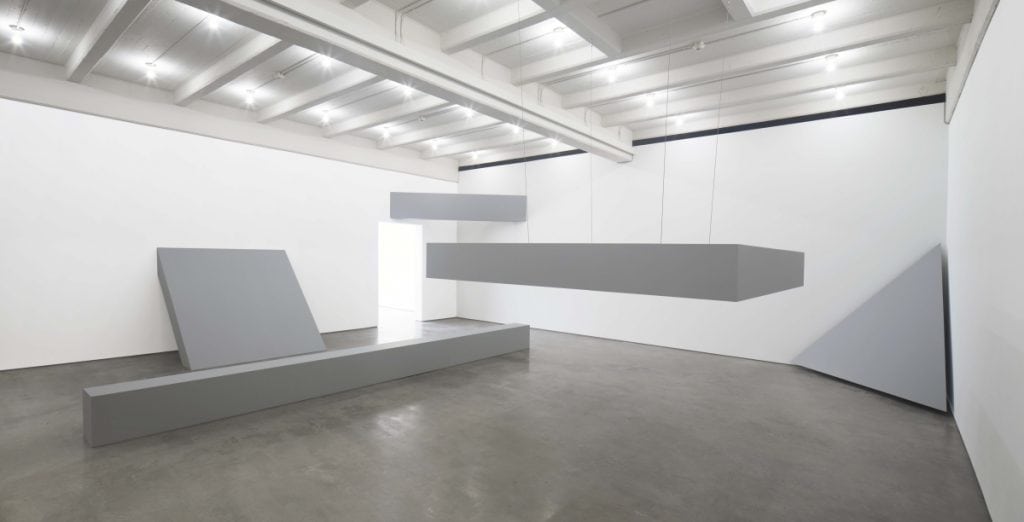 This acquisition establishes Morris’s central role in the development of postwar sculpture in the U.S. and traces his evolution throughout the 1960s, as well as the transition between Minimal, Postminimal and Land art practices. With this acquisition he will take his place alongside Dan Flavin, Donald Judd and Sol LeWitt, his contemporaries.

Dia:Beacon, located at 3 Beekman St., is open in November and December from 11 a.m. to 4 p.m. Thursday to Monday. Admission is $15 for adults, $12 for students and seniors and free for Dia members and children younger than 12. Admission is free on Saturdays and Sundays for Beacon residents. Residents of Putnam and Dutchess counties are admitted free on Community Free Day, which next takes place Jan. 14. Visit diaart.org for more details.