When Carinda Swann retires Dec. 31 after eight years as director of the Garrison Art Center, her departure will trigger a realignment at the nonprofit. Swann will stay on as part of the gallery committee and has also signed up for a few classes, now that she has time to take them. She will be succeeded by Katie Schmidt Feder, hired away from the Peekskill-based arts organization, Embark, that she co-founded.

At the same time, Dolores Strebel will become associate director and Becky Gordon has taken over as education coordinator following the departure of Melissa Schlobohm for family reasons (although she still teaches at the center). Finally, administrative assistant Julia Famularo has taken on duties as media coordinator.

“Our roles are more defined now, but we will all still wear our many hats,” Strebel says. “We keep those hats in the drawer and pull them out as we need them.” She says that with the changeover in staff, “it’s important to continue the momentum. All these years it’s been solid footing and everyone here is devoted to this place. We have a small staff and my role is to make sure that all of the ideas that are generated here happen and look effortless.” 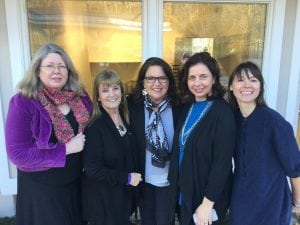 Strebel recalls that from the day Swann took over as director in 2008 after being involved with the center in other capacities, “it’s been new ideas and programs and the jettison of things which weren’t working.”

Swann took over a week before the 2008 economic crash, which gave impetus to change. “It forced us to look at every single program carefully,” Swann  says. “When I came in, we’d built up this nice staff, but had to immediately restructure.” She added: “You can’t grow your organization beyond what the community can support. We haven’t increased our budget over the years, but we’ve maneuvered it.”

Eventually the center was able to hire an administrative assistant and an education coordinator, but Swann says there was still too much on the director’s plate. After narrowing down the applicants to succeed Swann, the search committee focused on two candidates “whose talents were different to each other’s but who matched up really well,” she says. Gordon had experience with exhibitions, so the committee decided to shift that responsibility and programming from the director’s position and assigned management duties to their other candidate, Feder.

The Garrison Art Center wraps up the year with two shows starting Dec. 10 with openings from 5 to 8 p.m. Tatana Kellner’s  Enigmatic Moments features abstract works on paper. smallWORKS is a biennial juried group show curated by painter Don Nice with paintings, drawings, photography, sculpture and prints that are all less than 20 inches in size. Both shows continue through Jan. 8 and the gallery is open Tuesday to Saturday from 10 a.m. to 5 p.m. 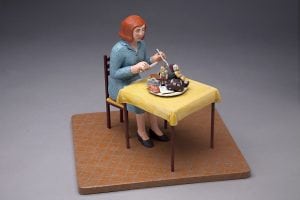 The 3D best-in-show winner in the smallWORKs exhibit at the Garrison Art Center: A Lot on Her Plate, by Ruth Geneslaw (Photo by George Potanovic Jr.)

Gordon moved to Beacon five years ago from the Berkshires, where she worked at the Berkshire Museum. Looking for a “cheaper, less scary version of going to New York City,” she was happy to reintroduce herself to the art world, having graduated from Ohio State University with a bachelor’s in art education and a master’s in art history.

After her Beacon move, Gordon wound up working at Niche Modern, the lighting company in the former Tallix studio, as the director of sales and marketing. She became acquainted with the Garrison Art Center while taking a ceramics class there last winter.

“I fell in love with it and, when there was an opening, it became an impetus to make me decide to leave Niche after three years,” she says. “I took three months off and this all came together. It’s essential for me to be reacquainted and connected with the art world.”

Feder earned a bachelor’s in musical theater from the University of Western Colorado, though she has always loved fine art, design and crafting. After college she did regional theater work before moving in New York City, where she directed. After discovering the Highlands on a day trip, and being married at Beacon’s Mount Gulian, she and her husband relocated to Peekskill, drawn by the mix of affordability and the arts. After her two children were born, Feder shifted into investment banking, where she picked up business skills but also realized it wasn’t for her.

The art center, located at 23 Garrison’s Landing, will hold an open house for Carinda Swann on Sunday, Dec. 4, from 3 to 5 p.m.

“I got back into the arts, teaching at studios all over the place, and became frustrated I couldn’t find anything in Peekskill,” she says.

To remedy that, Feder co-founded Embark with Sol Miranda. It is a place “where artists can affordably teach, create and perform and where community members can experience the arts,” she says. The problem was she “knew nothing about starting a nonprofit: how to file the paperwork, build a board, all those things, so I decided I needed to go back to school for arts administration,” she says. She attended a limited residency program at Goucher College, which allowed her to do much of the work online, and wrote her thesis on outsider art.

Although finding candidates with local ties wasn’t an essential, Swann says it was important to the search committee to hire people who know the communities. “We have two obvious towns to connect with more: Peekskill and Beacon,” she says. “Katie and Becky know them well. Our long-term goals include connecting beyond Philipstown.”

Swann says she feels good about how she’s leaving things, noting “we have a wonderful, working board, a great teaching staff and a great base of volunteers.”