No matter their ability, many high school athletes dream of competing in college and even the professional leagues. The 15 members of the boys’ and girls’ bowling teams at Beacon High School don’t expect that. The sport has limited television exposure, its professionals play in anonymity and only four Division 1 universities in the tri-state area have bowling programs.

The high school bowlers typically practice once a week and spend two days at matches. On Dec. 7, the boys won a game against bowling power John Jay, which had not lost in more than two years. (John Jay won the match to maintain its lead in the Dutchess Putnam Interscholastic Bowling League with 26 points won and 2 points lost, followed by Beacon with 21 points won and 7 points lost.) 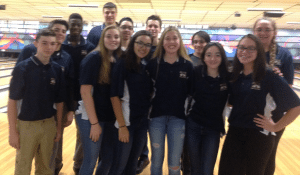 Coach Brian Mahon, in his 19th season, said the assignment began as a favor to the athletic director but has become a true enjoyment. “The kids don’t do it for recognition,” he said.

Both the boys’ and girls’ teams are competitive this year, trailing only John Jay in the standings. This despite Beacon being the smallest school in the six-team league and the challenge it faces recruiting bowlers. “We have a solid core,” Mahon said, but “there are fewer kids coming out and our depth is lacking.”

One reason for that is bowling has gotten expensive.

“Those who participate, the better bowlers, grew up in a family that bowls,” Mahon said. “They started in the local Saturday morning leagues.” Many of these bowlers, he said, join the varsity squad in seventh grade.

The Bulldogs next face Ketcham on Dec. 21 at 3:30 p.m. at Fishkill Bowl and Carmel at the same time Dec. 22. The regular season continues through Feb. 1.