A Philipstown pet groomer who comes to you

The milkman and bread man may be nearly extinct but a mobile pet grooming service is coming into its own. Tami Adams and her Bark Avenue Mobile Spa for Pets, based in Philipstown, make house calls the old-fashioned way. Lassie and Toto don’t even leave the yard.

Adams hit the ground running at an early age. As a teenager she had a house-cleaning business, booked and promoted bands and even put together a concert at The Paramount in Peekskill. Grooming began at home with the family Yorkshire terrier. At 19, after a training program at the Board of Cooperative Educational Services (BOCES), pet grooming became her profession. She has owned her own salon for 16 years. 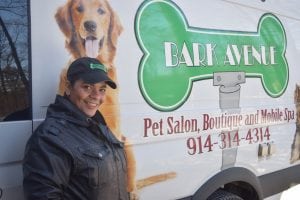 The van’s interior is a miniature but roomy spa that allows her to offer on-the-spot services such as nail clipping, baths, hot-oil treatments and hair cuts, mostly to dogs, who outnumber cats among her clients by a ratio of 10 to 1. She claims she doesn’t have a favorite breed. “It’s an individual animal that is perhaps more enjoyable than another,” she says. “You become friends.”

She has groomed a miniature horse, a guinea pig, a hamster and several rabbits. Requests can be on the zany side. “I’ve been asked to do all kinds of wacky hair cuts, but one customer asked me to make her dog look like Suzanne Somers from Three’s Company. That was funny!”

Other requests can be sad. “I’ve groomed many animals just hours before they were euthanized,” she says. “Sometimes I’ve known the dog since it was a pup.” 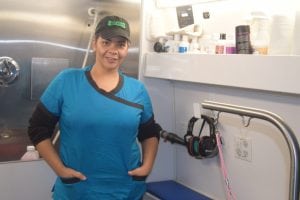 The inside of Adams’ van is a miniature but roomy spa. (Photo by M. Turton)

Adams is convinced that animals do better in a van than at a salon. “The stress level on the dog and the groomer is much lower,” she says. “There are no competing sounds, no interference from other people or animals. And the pet can look out the window and know they are still in their home territory.” Traveling to a salon also can cause an animal to act erratically.

Often it’s better if the pet owner is not present while Adams is working. “Some dogs get very anxious if the owner is right there,” she says. “But I never dissuade people. I just ask them to sit quietly.” Some owners come with books, photos, folders or detailed notes, she says. “Others just say ‘You know what you’re doing — make him look nice,’ ” she says. “Guess which approach I prefer and guess who is usually most pleased with the result?”