Readings series at Depot hopes to provoke, not politicize

Theater reflects the world but also, at its best, pokes back. With that in mind, the Excellent Creature theater company, headed by Christine Brooks Bokhour and Greg Miller of Cold Spring, has launched a monthly series of readings and discussion. Called Dialogues with Drama, it will present its second offering, John Christian Plummer’s We Have Brought Nightmare, at the Philipstown Depot Theatre in Garrison on Wednesday, Jan. 18, at 7:30 p.m.

“While good theater always provokes conversation and changes the way we see the world, with this series, the conversation is not secondary, it is the main event,” explains Miller. “We have chosen culturally provocative plays and a format that focuses the evening on the conversation.” He promises entertainment but says they hope the conversations continue long after the reading ends. 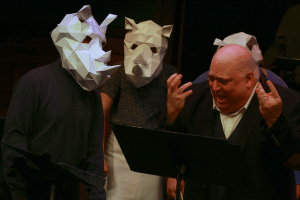 The first reading, in December, was Eugene Ionescu’s Rhinoceros. Considered a political parable, an absurdist comedy or both, Rhinoceros describes the pressures on people to conform and the mob mentality and morality that can result. We Have Brought Nightmare focuses on the Dutch settlements in the Hudson Valley and addresses, according to its author, “the struggle to unify — with oneself, with others, with the environment. This is an eternal struggle, not unique to New Netherland of 1642 or the United States of America in 2017.”

Miller adds: “Rhinoceros dealt with epidemic political movements. Nightmare explores racial divides and immigration from a perspective strangely close to home. Our next play, Ibsen’s An Enemy of the People, deals with water pollution, but more important, the conflict between politics and science. We don’t have to reinvent the wheel.” 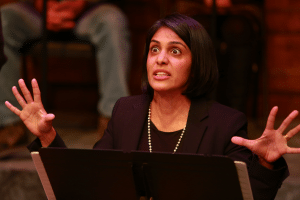 For Bokhour, there’s a distinction between “provocative” and “politicizing,” noting that Dialogues with Drama aims for the former. “We’re talking about human issues, having conversations around these ideas,” she says. “Looking at our lives and seeing, in terms of theater, where similar things have come up in the past so we can see that it’s a longer, broader picture. In looking at the past, we tend to romanticize, thinking ‘Oh, it may have been hard for them, but it was beautifully simple,’ but in fact they still had greed, love triangles and hatred!”

We Have Brought Nightmare was written by Plummer as a submission to a 10-minute play competition sponsored in 2006 by the Beacon Institute for Rivers and Estuaries and TrueNorth Theatre and was inspired by a bad dream one of his sons had. He expanded the play into a full-length work that was presented as a staged reading in 2014 by Up Theater in New York. 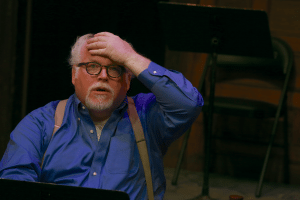 The cast features Samia Finnerty, who most recently appeared off-Broadway in The Wolves; Plummer’s son, Charlie, who will next be seen in the film The Dinner; Tim Harbolic and Tiberio Saraceno, who both appeared in Plummer’s Hudson Valley Shakespeare Festival production of Our Town; Cole Rivers, a spoken-word artist from Peekskill; and two actors who will appear in the Depot’s upcoming production of Company, Kullan Edberg and Mia Canter. Plummer will also appear in the show.

Dialogues with Drama usually takes place on the second Wednesday of each month. Admission is free, but reservations are suggested at brownpapertickets.com.