Last year’s Class C regional semifinal defeat to Pine Plains made an impact on Haldane girls’ basketball coach Tyrone Searight, who felt that for the Blue Devils to advance to Glens Falls in 2017 they would need to be ready for tough competition.

With that goal in mind, he upgraded Haldane’s 2016-17 schedule to include more Class B schools. After losing to Irvington early, the team has notched wins against Valhalla, Westlake and Pleasantville. The most recent test of Searight’s strategy was on Jan. 17 in a visit to Briarcliff High School, which had lost only one game this season.

From the onset, Searight’s strategy seemed clear; force the Bears up-tempo to utilize Haldane’s advantage in quickness and depth. Haldane is at its best swarming the basketball and creating fast breaks.

Briarcliff features a talented nucleus led by sophomore guard Maddie Plank, who was named seventh team Class B All-State last season. She is the focus of the offense and Haldane did its best to challenge her.

At the onset, Briarcliff sliced through Haldane’s pressure and capitalized on strong drives to the basket. Often the Bears would get multiple rebounds attacking the undersized Haldane squad on the glass. “We have been stressing all year as a small team that we must get physical and box out for us to advance to where we want to go,” Searight said. 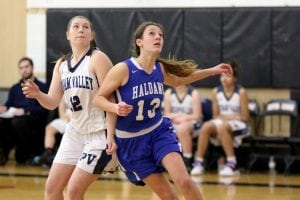 Allison Chiera (13) battles for a rebound during the Blue Devils’ first matchup with Putnam Valley earlier this season. The two teams met again at Haldane on Jan. 19, with the Blue Devils winning, 52-46. (Photo by Richard Kuperberg Sr.)

Briarcliff took a 14-9 lead after Plank hit a three but Hannah Monteleone of the Blue Devils answered with a three of her own. At the end of the first, Briarcliff was up 21-15.

Briarcliff continued to dominate inside but Alzy Cinquanta caught fire and scored eight straight points to tighten the game. Haldane’s defensive pressure forced several errors before Chiera scored on a lay-up to give Haldane its first lead, 34-33. The half ended with the teams tied at 35.

In the third, Chiera was effective scoring in the lane, scoring on lay-ups off a screen. When Searight rested his core three for a moment, Plank took advantage, nailing a three. Cinquanta made a reverse lay-up but Plank hit another three. Missy Lisikatos made a strong drive to the basket, drew a foul and converted both free throws and the teams finished the third with Briarcliff up by eight.

Haldane started the fourth quarter playing a 2-3 zone defense for the first time. After the Bears converted on the inside, Haldane went on a run. Lisikatos hit a basket on a back-door cut and freshman Olivia McDermott nailed a three-pointer to push Haldane ahead, 61-60. 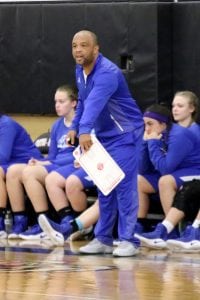 Haldane girls basketball coach Tyrone Searight is shown during a game against Putnam Valley earlier in the season. (Photo by Richard Kuperberg Sr.)

Unfortunately, Haldane would not get another clean look at the basket. The officials did Haldane no favors with two questionable calls, the first of which led to a Haldane turnover. With Briarcliff holding a three-point advantage, and Haldane in-bounding under the basket, Plank knocked the ball away from Chiera, which led to a tie-up. One official called jump ball, but apparently in the split-second that Briarcliff may have possessed the ball, the other official heard a Bears player call time-out.

Haldane was forced to foul and senior Jackie Contento calmly iced the game with two free throws, for a final score of 66-61. Chiera lead the Blue Devils with 19 points, Cinquanta had 15 and Monteleone chipped in 9.

“I am not taking anything away from what they did, but I thought we outplayed them until the last three minutes,” Searight said. “We let it get away from us. We didn’t make the right rebound, the right passes, to make the layup.”