One of most active volunteers in Beacon

If you’ve spent any time in Beacon, you’re familiar with the work of Norman MacLeod.

Together with his wife Ann, who died in 2015, MacLeod has been one of Beacon’s most active volunteers, helping to beautify the city through the installation and maintenance of flowers at some of its busiest spots.

“A lot of people mention the flowers on Main Street and it makes me feel good,” MacLeod says. “I never say I’m responsible for it, I just agree that it looks good.”

The Beacon Republican Committee will honor the lifelong resident at the group’s ninth annual Reagan Day Dinner at Dutchess Manor on Feb. 3. (For tickets,  call 845-202-2398.) 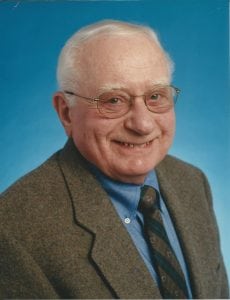 “Norm MacLeod has been a pillar in Beacon for so many years,” said Beacon GOP Chair Justin Riccobono. “He is a volunteer who continues to give out of his heart, so our little city can be beautiful and welcoming for those who live here and those who visit.”

Now 84, MacLeod retired as a systems analyst at IBM in 1991. It was Ann who urged her husband, then 58, to stay active, perhaps by trying his hand at something completely different: civic beautification. “Ann was always afraid I would just sit and watch TV, so she told me to try volunteering. ‘You’ll love it,’ she said.”

In 1998 MacLeod joined the Tioronda Garden Club, and shortly thereafter became Beacon’s first civic beautification chairman, a post he still holds. He says he remembers exactly when he realized that Beacon was special: January 1956, when he returned from a four-year stint in the U.S. Air Force during the Korean War. “I remember thinking, what a beautiful place I live in,” he says. “You appreciate a place like this when you leave and come back.”

Working as a retiree with a handful of  volunteers and alongside then-Highway Superintendent Randy Casale, MacLeod and Ann began preparing flower boxes at the Welcome to Beacon signs on Routes 9D and 52, at the train station and at Mt. Beacon, as well as at the George Washington triangle at Teller Avenue and along Main Street. In all, more than 20 locations around Beacon are maintained with flowers or decorations virtually year-round.

MacLeod said their goal was to do anything they could to make Beacon look better. “We found old flower pots and put plantings in them and the city would put them up for us,” he says.

The Hudson-Fulton-Champlain Quadricentennial celebration in 2009 also led him to team with George Mansfield to design the Beacon Visitor Center across from City Hall.

“Between the two of us, we got all local contractors to come in and work for free,” says Mansfield, now a City Council member. “It was completely done with volunteers, and in the end, what I really liked about it was that it united old and new Beacon.”