Firefighters from a number of local departments combined to contain a fire that erupted sometime early in the morning of Jan. 31 at an abandoned factory building adjacent to Madam Brett Park in Beacon. The pedestrian bridge directly adjacent to the warehouse did not sustain serious damage, nor did the park, which is owned and managed by Scenic Hudson. 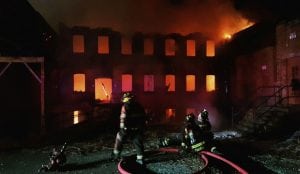 Three floors of the old Tuck Tape building burned as flames shot through the roof, Beacon Fire Chief Gary Van Voorhis said. It took firefighters from all three Beacon stations, Glenham and the Village of Fishkill more than three hours to contain the blaze.

Members of the Hughsonville and Rombout fire departments manned the Beacon stations while city firefighters were on site. 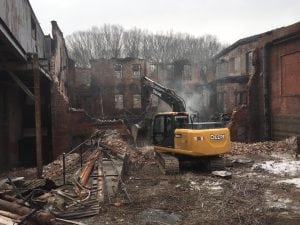 Van Voorhis said it’s not known what started the fire.

The building’s walls were taken down later in the week as a safety precaution.