As newly appointed Beacon City School District Superintendent Matthew Landahl spoke to board and audience members around 10 p.m. on Jan. 26, just moments after being voted in as the district’s 10th superintendent in as many years, he mentioned three quotes that have influenced him during his career.

The first, “Nobody cares about how much you know until they know how much you care,” he attributed to a teacher in Baltimore, where he began his career more than 20 years ago. It was there, Landahl said, that he learned teachers have to build relationships with their students first, before they can truly affect their lives. 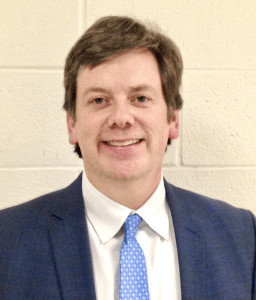 The second quote, “Never ask anyone to do anything that you’re not willing to do yourself,” he said refers to his management style, citing the need to show colleagues that he, too, will be flexible and accountable.

However, it was probably the third quote that meant the most to the parents and administrators listening. Describing the stress he and his wife felt as they navigated challenges that their son, now five, faced early in life, Landahl spoke about a nurse who reassured him often that, “We got this.”

For a school system that has faced challenges of its own, it may have been exactly what his audience needed to hear.

“I was actually blown away,” said Alana Reynolds, a Beacon parent who attended the board meeting. “I thought everything he said resonated. He was exactly on point.”

School board member Meredith Heuer said that, for her, Landahl emerged as the front-runner for the position after the first round of interviews in early December.

“I thought it would be a really hard decision just by reading applications,” Heuer said. “I was impressed by how he could follow through with a thought. His answers were strong and genuine.”

The Costs of Early Departures

The Beacon school board voted 8 to 1 to hire Matthew Landahl as its new superintendent, effective July 1. Michael Rutkoske voted no — although he supports Landahl as a candidate — because the incoming superintendent’s contract does not include a “no-fault” clause that would set a pre-determined sum Landahl would receive should he leave before his contract ends in 2020.

“In terms of fiscal responsibility, you know what your liability is” with a no-fault clause, Rutkoske said. Landahl presumably will earn more than the $150,000 he makes annually as deputy chief of the Ithaca school system (the most recent board-hired Beacon superintendent, Barbara Walkley, made $181,050), but no details of the agreement were released.

According to documents obtained by The Current through a Freedom of Information Law request, the Beacon district paid $355,000 in buyouts to the three full-time superintendents hired before Landahl. That includes $45,000 to Barbara Walkley a year ago; $185,000 to Raymond Bandlow, who held the job for nine months before he left in July 2012; and $125,000 to Paul Dorward, who stayed a year before resigning in August  2014. Contract buyouts are typically done to avoid litigation.

“Our history for keeping superintendents over the last 10 years has been horrendous,” Rutkoske said at the Jan. 26 meeting. “While I believe that we will have a long relationship, if circumstances arise that neither the board nor Dr. Landahl can possibly foresee at this point, I feel it is my responsibility to ensure there are protections in place for the district.”

He added: “I have a fiduciary duty to the taxpayers. I campaigned on this and intend to uphold this duty.”

Forty-eight candidates, most of them from the Northeast, applied for the job. The search firm Hazard, Young, Attea and Associates narrowed the field down to 17 and board members interviewed five finalists before giving Landahl, 45, the nod.

The school board voted 8 to 1 to confirm Landahl as superintendent (see sidebar on right).

“I feel like we’re coming across a finish line that is a massive milestone for us,” said Kristan Flynn. “One of the most important things for me in this search was to find somebody who really knew how to bring opportunities to all kids. He’s done that over and over again.”

Landahl, whose mother was an elementary school teacher in Chicago for 30 years, earned a degree in history from Grinnell College before joining Teach for America. He was assigned to teach fourth- and fifth-grade students in Baltimore and led a summer program during his five years there.

He next moved to Charlottesville, Virginia, where he was an elementary school principal while pursuing his master’s and doctorate in education administration and supervision at the University of Virginia. He earned his doctorate in 2012.

Landahl and his family moved from Virginia to Ithaca in 2013 when he was hired as the district’s chief elementary schools officer. In 2014 he became its chief academic officer.

In an interview, Landahl said he expects to be visible in Beacon and at some school- and board-related meetings before starting full-time on July 1. He will finish the school year in Ithaca, where he has served as deputy superintendent since 2015. The Ithaca district has 12 schools and about 5,100 students, and Landahl says he has worked in a variety of areas, including budget development and planning with special education teachers.

With just under 3,000 students, the Beacon district is far smaller than Ithaca but is also more diverse and somewhat poorer. According to 2014 state data (the most recent available) Ithaca’s student body is 66 percent white, 13 percent Asian-American, 10 percent African-American and 6 percent Latino and multiracial. Thirty-five percent of the district’s students are considered economically disadvantaged.

The Beacon district is 47 percent white, 27 percent Hispanic and 19 percent African-American. About 51 percent of its students are economically disadvantaged.

As for Beacon’s contentious leadership history, Landahl called it a nonissue. “By midway through the interview process I felt pretty unfazed by that history,” he said. “The board is moving forward now. Honestly, at this point, I don’t worry about it at all.

Landahl noted two things that, although a week or so apart, made him feel particularly confident in his decision to move to Beacon. First, during a mid-January daylong visit to each school in the district, “I saw a lot of heart and I saw a lot of people who care for kids. I saw a lot of engaging things in the classroom. That was a really important part of the process for me.”

The second, he said, occurred earlier in the evening on Jan. 26, before the board voted to approve his hire: “I didn’t foresee it ahead of time, even though I probably should have, but when the board went into executive session I was left alone in the room with 50 or 60 people. It was great. People care deeply about the schools. They were open and excited about new leadership, and I was excited to meet them.”

About 90 minutes later, after the board officially handed him the reins of the Beacon City School District, he told the group, “We got this.”